It's been a rocky road for upstream MLPs over the past year. Too much debt and weak oil prices have created tremendous pressure on the balance sheet of companies such as Vanguard Natural Resources (NASDAQ: VNR), with many of its peers, including sector leader LINN Energy (OTC:LINEQ), on the brink of bankruptcy. That said, the sector and its occupants are not without hope. Here are three catalysts that could cause Vanguard Natural Resources to soar.

1. Its banks are very lenient

Like most of its peers, Vanguard Natural Resources basically maxed out its corporate credit facility to grow. As of the end of last year, the company had borrowed $1.69 billion of its $1.8 billion in available credit. That's a big problem because that credit facility is subject to biannual redeterminations by its banks, which lend it money based on the value of its oil and gas reserves. The fact that the next redetermination is in April is a huge concern, because oil and gas prices have done this since the last redetermination: 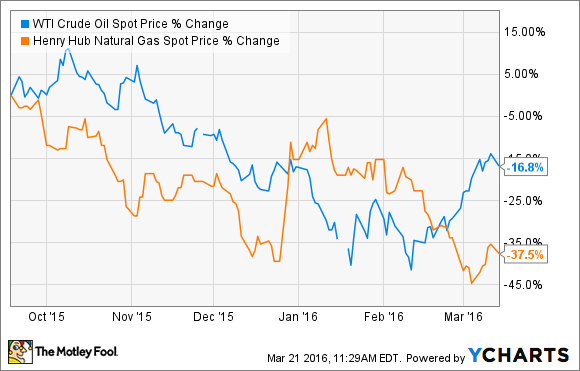 Given the steep drop in commodity prices, it has taken a big chunk out of the value of Vanguard Natural Resources oil and gas reserves. As such, its banks are likely to significantly reduce the company's borrowing base when they redetermine the facility next month. The concern is that the borrowing base could be reset below the company's outstanding borrowings, which would result in its having to repay the deficiency in equal installments over the following six months. That said, should its banks show leniency and cut the borrowing base by $100 million or less, it would remove a huge weight that's been holding down Vanguard Natural Resources.

2. It seals a deal to sell its SCOOP/STACK assets
Given the significant tightening in industry credit this year, the company isn't banking on its banks being lenient. Instead, it has already initiated a process to sell the STACK/SCOOP asset it picked up in the Eagle Rock Energy merger last year. The company hopes to have a deal in place at the same time of its bank redetermination to use those proceeds to reduce its outstanding borrowings.

That being said, there's a wide gap between what companies like Vanguard Natural Resources are hoping to get for these assets and what buyers are willing to pay. Further, there's a growing number of SCOOP/STACK assets either on the market, or potentially heading there, because it's one of the few shale plays that still enjoys strong economics at current oil prices. In other words, the company might not get top dollar for these assets, especially given its tight time frame and known financial issues. However, it if is able to find a buyer, and obtain a fair price for this asset, it could alleviate a big portion of the financial pressure currently facing the company.

3. The upstream MLP leader announces a restructuring plan
Another big weight on Vanguard Natural Resources, and other upstream MLPs, is that sector leader LINN Energy is teetering on the brink of bankruptcy. The company has said that bankruptcy may be unavoidable given that it too has basically maxed out its credit facility. In fact, the company has even had to exercise the grace period to defer recent interest payments on some of its bonds to buy it more time to put together a restructuring plan.

If the company can put together a viable restructuring plan that keeps it out of bankruptcy, it could cause the whole upstream MLP sector to soar. Not only would it at a minimum calm fears that a LINN Energy bankruptcy would drag the whole sector down with it, but it would also provide other upstream MLPs such as Vanguard Natural Resources with a potentially viable blueprint to follow to address their own financial woes.

Investor takeaway
Upstream MLP Vanguard Natural Resources has seen its unit price sell off steeply over the past year because of the dangerous combination of weak oil prices and a nearly maxed-out credit facility. That said, if the pressure on that credit facility were to abate, either through asset sales, lenient lenders, or a restructuring blueprint from LINN Energy, it could send the company's units soaring. However, quite the opposite is true if none of those catalysts come to fruition, with a risk remaining that this company could sink even further if industry conditions don't vastly improve in the very near term.