Please ensure Javascript is enabled for purposes of website accessibility
Log In Help Join The Motley Fool
Free Article Join Over 1 Million Premium Members And Get More In-Depth Stock Guidance and Research
By Reuben Gregg Brewer – Apr 19, 2016 at 9:06AM

There was a time when MLPs and similar pass-through entities were all the rage. Now they could turn into a nightmare for investors.

Last year Linn Energy LLC (LINEQ), a one-time market darling oil and gas driller, was on the ropes (and that hasn't changed, by the way). Facing a heavy IOU tab, it did the only thing it could: It restructured its debts. And that, it turns out, is a nightmare for investors. If you own Linn, you have already taken that hit, but the pain may not be done. And it doesn't stop with Linn; here are a few other partnerships and similarly structured entities that you should be worried about.

What Linn did
Technically speaking, Linn Energy isn't a limited partnership, but it shares many of the features of an LP. And one is that it's a pass-through entity. That helped it send tax advantaged distributions along to shareholders during the salad days for oil. But because it pays so much out in distributions, it has to take on debt and issue more units to fund growth. While oil prices were high that wasn't a big deal, but with oil prices low, Linn has been having a hard time carrying the debt it took on.

Late last year it restructured some of that debt. The company told shareholders: "Unitholders of LINE are required to pay taxes on their share of LINE's taxable income, including their share of ordinary income and capital gain upon dispositions of properties by LINE or cancellation of debt, even if they do not receive any cash distributions from LINE. For example, LINE's 2015 senior notes exchanges and repurchases of outstanding senior notes at prices lower than face amount resulted, and any similar transactions in the future will result, in the cancellation of debt income that will be allocated to LINE unitholders." (Emphasis mine.)

Wait, what? It's a little arcane, but to sum up, unit holders have to pay taxes on their allocated portion of the debt forgiven by lenders in a debt restructuring -- even though they didn't get any direct financial benefit from it. For reference, that 2015 move led to $1.7 billion in debt forgiveness. Now, on the one hand, Linn did what it had to do to survive...at least for a little while, since it's now been forced to take further steps to ensure it lives on in some fashion. But on the other hand, unit holders have been served a heaping plate of hurt. In other words, Linn Energy is a company to avoid because, even after the damage from last year, it could still lose you a lot of money.

But if you are looking at Linn with trepidation, you should also be thinking about Vanguard Natural Resources (NASDAQ: VNR). The two business are competitors with similar structures and business models. And Vanguard appears to be going down the same path as Linn: It completed a debt exchange early this year and it suspended distributions in March, including on its preferred shares. These aren't good signs and for those thinking now might be a good time to go bottom-fishing; Linn shows that there are clear risks even if the companies manage to restructure their way out of their debt conundrums. 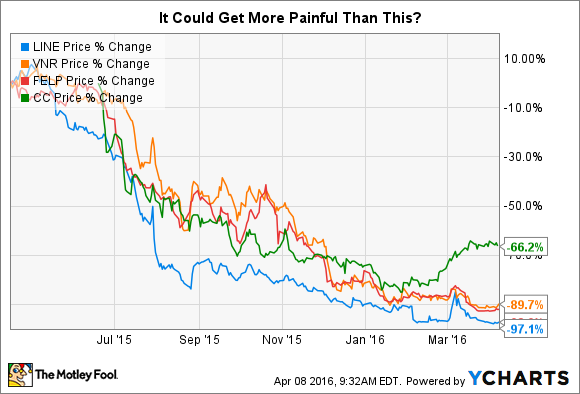 But don't stop here
There are other pass-through entities that are suffering right now. For example, Foresight Energy LP (FELP) is a coal miner. Although it has a big position in the favored Illinois Coal Basin, it also has a lot of debt. There's a lot going on at the company right now, including a legal fight surrounding a potential change of control due to an investment made in the company by private company Murray Energy, but the big takeaway is that Foresight has suspended its distribution and is openly discussing the potential for bankruptcy. Like debt forgiveness, an MLP bankruptcy can have material tax consequences for unit holders. It's best that you avoid Foresight.

Then there's a company like CSI Compressco LP (CCLP -0.77%), which makes, sells, and leases gear that helps increase well production. The company has already cut its distribution by 25% in an effort to cut debt. But here are two more worrisome numbers: It's compression fleet is only working at around 80% of capacity, and its backlog of new builds fell 70% between the start of 2015 and the start of 2016. That doesn't bode well for this year. Investors could lose money, but it could also mean CSI Compressco may be at risk of needing to take more drastic action. If that includes anything to do with debt forgiveness, investors will likely take a hit.

Compressco isn't in as bad shape as the other three companies above, but it gives you an idea of what to look for. Sure, it could get through this rough patch without too much more pain, but don't simply accept that. You'll want to watch this and every other struggling LP very closely or you could find yourself shocked come tax time next year.

The painful underbelly
When everything was going well for pass-through entities like Linn, Vanguard, Foresight, and Compressco, no one was thinking about what could go wrong. Now the potential downside is taking center stage. On the business side alone, investors could lose a lot of money on all four of these companies. But add in the potential tax consequences of debt restructuring and things could get even worse. Now is the time to move up the food chain, not down. If you are looking at MLPs and similar corporate structures, stick to the best and financially strongest. Otherwise, you could lose a lot more money than you think.