According to a recent report, Chesapeake Energy (OTC:CHKA.Q) is said to be considering the sale of some of its holdings in an emerging shale play in Oklahoma known as the STACK. It's a play that has started to emerge over the past year after companies like Continental Resources (NYSE:CLR) and Newfield Exploration (NYSE:NFX) pivoted their attention from other plays to focus on the STACK, while others including Devon Energy (NYSE:DVN) paid big bucks to bolster their position in that emerging play. Chesapeake Energy, however, is hoping to cash in on their optimism in order to pay down some of its multibillion-dollar debt pile.

Drilling down into the STACK

The STACK stands for the Sooner Trend Anadarko Basin Canadian and Kingfisher Counties and is an oil-rich shale play in northern Oklahoma. As the map on the slide below shows, the STACK play not only refers to its location but also to the fact that it's where the Meramec and Woodford shales are stacked on top of each other, which provides drillers with multiple layers to drill: 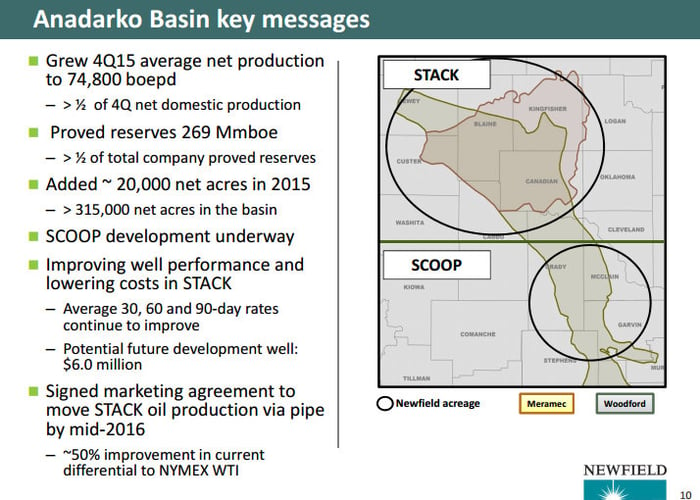 Because there's so much oil and gas saturating the rocks beneath this acreage, the drilling returns can be quite compelling even at current oil prices. That is because part of the equation in calculating the return is the amount of oil and gas that can be extracted, which is also known as the estimated ultimate recovery, or EUR. Newfield Exploration, for example, estimates that it will ultimately recover more than 950,000 barrels of oil equivalent per STACK well. Given the current drilling costs of around $6 million, the returns based on that EUR even at current oil prices are pretty compelling, especially against the Bakken, for example, where its EUR is 680,000 BOE while wells cost more than $11 million to complete.

It's those returns that fueled Devon Energy's decision to pay nearly $2 billion in cash and stock to buy a privately held STACK producer late last year. That company, which controlled nearly 80,000 net acres in the STACK, was generating a hefty 40% internal rate of return on STACK wells at around a $40 oil price. Meanwhile, Continental Resources said last quarter that the "Meramec wells in STACK are delivering some of the highest returns in the company," which is why it has turned its attention from the Bakken shale to drilling STACK wells.

A crowded market
Because the STACK play is one of the few that's still very profitable to drill at current commodity prices, Chesapeake Energy is reportedly looking to cash in on this enthusiasm in order to bolster its balance sheet. According to reports the company's assets in the play could be worth between $300 million to $700 million. If the assets were to fetch that higher-end value, it would put the company well on its way to hitting the upper end of its target of $500 million to $1 billion in asset sales this year.

Having said all that, the company is facing some stiff competition because other beleaguered oil and gas companies are also hoping to cash in on the STACK in order to pay down their own debt, including upstream master limited partnership Vanguard Natural Resources (NASDAQ: VNR). In Vanguard's case, it is seeking cash to pay down its credit facility, and is dangerously close to hitting its borrowing limit. As of the end of last year, Vanguard Natural Resources had borrowed $1.69 billion of its $1.8 billion in available credit, which is a real problem considering that its banks will redetermine that borrowing base next month. Vanguard Natural Resources is hoping to cash in on its STACK assets just in time to pay down its facility so that it has more wiggle room should its banks reduce its borrowing capacity by a meaningful amount.

Desperate sellers are a potential problem for Chesapeake Energy because it could result in the company not fetching as high a valuation as it would like from its position. Furthermore, most of the would-be buyers, including Continental Resources, Newfield Exploration, and Devon Energy, are pretty strapped for cash right now, leaving them less inclined to pay big bucks for additional acreage given that their own balance sheets are under pressure.

Investor takeaway
The crash in crude prices has torpedoed the valuations of oil and gas assets, making it tough for deeply indebted companies to sell assets to pay down debt. That's forcing companies to look to sell their more valuable properties, with the STACK play among the few that hold a premium valuation today. That's both good and bad news for Chesapeake Energy because it would like to capture that premium valuation. However, it's not the only company looking to cash in while the asset is hot. With a growing number of STACK assets hitting the market, it might weigh down the value of Chesapeake's position, especially if sellers are desperate and buyers are constrained, which would hamper its ability to make a real dent in its debt.