So we asked three of our energy contributors to identify a company that has a better-than-10% dividend yield today that could be headed for a cut in the future. Here's what they had to say.

Matt DiLallo: Legacy Reserves (NASDAQ:LGCY) is the very definition of a stratospheric yielder, as it currently yields 28%. That's even after the company slashed its distribution from $0.61 per quarter to $0.35 per quarter earlier this year. I think it's a matter of time before its payout is cut or suspended, as the market clearly isn't giving it any credit for that high yield.

Over the past month, analysts have grown louder in their call for Legacy Reserves to bite the bullet and make another distribution cut. About a month ago, Oppenheimer downgraded the company to "underperform," saying that the recent double-dip in oil prices from $60 per barrel to the lower $40s is crushing the company's ability to generate cash flow. Moreover, its debt-to-EBITDA ratio is projected to balloon to more than 8.0 times next year if oil prices don't improve. Legacy is running out of options to improve that picture, as its unit price is down 83% over the past year, which is making an equity issuance very unattractive.

Analysts at Citi, meanwhile, recently said that Legacy Reserves was among two upstream MLPs that have the highest risk of making a meaningful distribution cut before the year is over. One of the reasons a cut might be necessary is the fall redetermination period when bank credit lines are reevaluated. The company currently has $400 million available on its $950 million facility, but it will have much less wiggle room should its banks make a meaningful cut to its borrowing base in a couple of weeks.

I think the prudent move for Legacy will be to suspend its distribution for the time being and generate as much cash as it can to reduce debt. Once industry conditions improve, then it can reinstate a distribution. But right now, it makes no sense to pay such a high yield.

Tyler Crowe: While I'm impressed with what Noble Corp (OTC:NEBLQ) has done in the past couple of years to right-size its fleet for the long term, I think that the next 18 months could be a trying time for everyone in the offshore rig space that might bring into question Noble's ability to fund its current 12% dividend yield.

The biggest question going forward will be its ability to obtain new contracts for its rigs. Between now and the end of 2016, more than half of the company's fleet will roll off contract. That amount of work and its shrinking capital expenditure budget is likely enough to get through the next several quarters without a dividend cut. Beyond that, though, is where things start to get questionable. 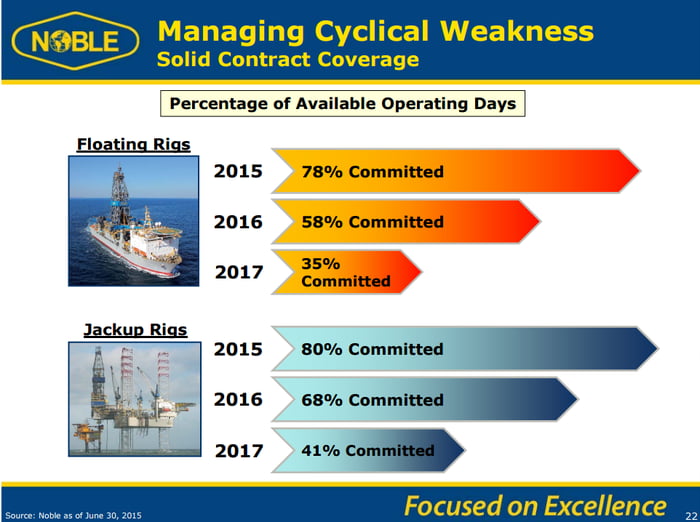 One thing that needs to be considered when looking at the offshore market is that many U.S. shale producers can now generate positive returns at lower prices than offshore oil, and we may not fully grasp how shale's ability to rapidly ramp up production could impact oil prices long term. On top of that, many of Noble's competitors will be bringing new rigs online over this time frame, which will make for very stiff competition when bidding for new contracts.

Another thing to consider is that Noble doesn't have a track record as a company that consistently pays a dividend. In the past 25 years the company has instated and suspended dividend policies three times. While dividend suspensions are very discouraging for the investor, they are normally necessary to get through tough situations like the one that we could be facing in the next 12 to 18 months in the offshore market.

While there are some reasons that Noble might be able to pull it off without cutting its dividend -- it does have one of the stronger balance sheets in the offshore market and very few capital obligations going forward -- there is a very real chance that we haven't seen the worst of the offshore market. If that is the case, then the chances of Noble being able to fork over about $375 million a year to its shareholders will get slimmer by the day.

Adam Galas: One oil producer whose sky-high yield is, in my opinion, unsustainable and threatened with a payout cut is Breitburn Energy Partners (OTC:BBEPQ). While that may sound grim to investors of this embattled MLP that's already slashed its distribution twice -- 76% from its December 2014 payout -- there are two main reasons I think another payout cut is possible over the next few quarters.

First, Breitburn has a mountain of long-term debt on its balance sheet: $3.1 billion, to be precise. The earliest debt maturity is the $1.3 billion it's borrowed under its current $1.8 billion credit facility, on Nov. 19, 2019. While that may sound like Breitburn has plenty of time for oil prices to recover, the problem is that this credit facility is up for redetermination on April 1, 2016.

According to Breitburn's latest 10-Q, on this date its lenders can adjust down its credit facility -- which is already 72% drawn -- at "their sole discretion based on their valuation of our proved reserves and their internal criteria." The last time creditors readjusted its borrowing limit was on April 8, 2015, when, in order to secure a $1 billion cash infusion from EIG Global Energy Partners, Breitburn's borrowing capacity was slashed 28%.

Since that time, WTI crude is down another 13%, which means the value of Breitburn's reserves continue to decline and, barring a sharp recovery in oil prices by April 1, the MLP's credit facility is likely to get cut again, threatening the sustainability of its current distribution.

Another major problem is that Breitburn's strong hedge portfolio -- 75% and 65% of liquids production in 2015 and 2016 at $93.46 and $89.01 per barrel, respectively -- could roll off before oil prices recover. For example the EIA is currently forecasting WTI will average $54 per barrel in 2016, and in 2017, 61% of Breitburn's crude production won't be hedged, meaning distributable cash flow could take a serious beating.