Please ensure Javascript is enabled for purposes of website accessibility
Log In Help Join The Motley Fool
Free Article Join Over 1 Million Premium Members And Get More In-Depth Stock Guidance and Research
By Reuben Gregg Brewer – Feb 21, 2016 at 11:05AM

Breitburn Energy has let income investors down. Here are a couple of alternatives that should hold up in the tough oil market.

Breitburn Energy Partners LP's (BBEPQ) distribution is toast. The oil and gas driller was supposed to provide a steady stream of income using the limited partnership model to expand production and help unit holders limit their tax hit. Plunging oil prices put an end to that. But that doesn't mean you can't find solid income options in the oil and gas space. Here are three to consider.

The best in the world
If you like oil and gas, or at least think that the oil rout has beaten the sector to the point of creating upside potential, than one place you have to look is ExxonMobil (XOM -5.32%). The current yield is around 3.6%. That's certainly nothing to write home about when competitors such as BP (BP -8.80%) sport yields as high as 8%. But there's an important difference: Exxon is probably the best-run oil company in the world. And while it's impossible to say that any oil company is immune to a dividend cut in what is a particularly deep industry downturn, Exxon is holding up well relative to its peers.

For example, Exxon was able to generate nearly $33 billion in cash flow in 2015, down 33% year over year. Capital spending was about $31 billion. BP had much less wiggle room, with cash flow of around $19.1 billion last year (a drop of nearly 42%) and capital expenditures of $18.7 billion.

But the future is even more telling. As Exxon heads into 2016, it's pegged capital spending at $23.1 billion, a cut of around 25%. That makes sense being that oil prices continue to be weak and cash flow is likely to fall year over year. BP's best case scenario on capital spending in 2016, meanwhile, is for a cut of just under 10%--but capital spending could also rise slightly to $19 billion based on its current projections. In other words, it looks like Exxon is in a much better position to ride out the downturn while still generating enough cash flow to cover its capital spending plans.

This is just one example, but it shows that there's a reason why BP yields so much and Exxon is among the lowest yielding oil majors. If you got burned by Breitburn's distribution cut, but still want some oil and gas exposure, it might be time to err on the side of caution -- Exxon is one of the safest oil and gas majors around. 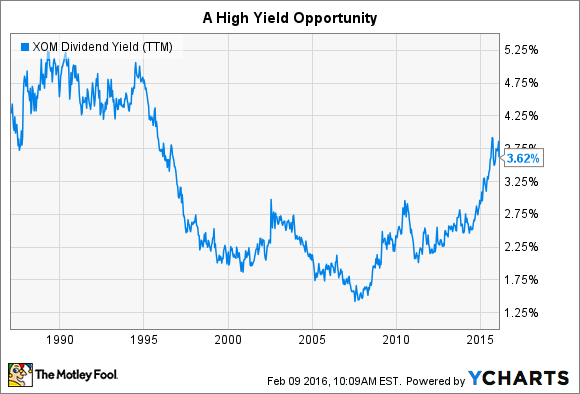 Moving oil & gas
Another option you might want to consider is moving oil and natural gas instead of drilling for it. There you have a plethora of beaten-down limited partnerships to pick from. However, one of the largest and best run is Enterprise Products Partners (EPD -5.22%). The partnership has a broadly diversified business, a long history of successful operations and expansion, and hasn't been hit too badly by the downturn.

For example, in 2015 Enterprise posted earnings of $1.26 a unit, down from $1.47 in 2014. That's a drop of around 14%. Exxon, despite being one of the best oil and gas drillers and its vast chemical and refining operations, saw a year-over-year earnings decline of nearly 50%. It's also worth pointing out that Enterprise's distributable cash flow, the cash it can pay out to unit holders, actually increased around 30% year over year.

What's behind Enterprise's financial results? It's largely a toll taker, charging customers for moving products across its nearly 50,000 miles of pipelines and holding it in its geographically diverse storage facilities. It isn't a driller, but that's why you might be interested in Enterprise in an energy downturn, it doesn't have as much exposure to commodity prices.

One other thing to like at Enterprise is that it doesn't have an external general partner eating up valuable cash flow. That gives it an advantage on the cost side and allowed it to cover its distribution 1.3 times in 2015. And CEO Jim Teague is talking about a 5% boost in 2016, assuming the board approves his plan. With a distribution yield of around 7.5%, that sounds like a plan investors could get behind after taking such a deep hit from names like Breitburn.

Another LP to consider is Buckeye Partners (BPL), with a yield hovering around 9%. Like Enterprise, Buckeye owns pipelines, storage facilities, and terminals. With more oil available then demand to sop it up, storage has been a good business. According to CEO Clark Smith, in the third quarter, "We were successful in increasing utilization as well as rates across our domestic and Caribbean assets, which contributed significant incremental cash flows." It's good to have in-demand assets. And as the U.S. opens its boarders to the global oil trade, Buckeye's oil terminals should also be in demand.

That said, Buckeye's distributable cash flow fell year over year in the third quarter, leading to a coverage ratio of just 0.89. So there's more risk here than at Enterprise. But, like Enterprise, Buckeye is a big toll taker and it's working on a sizable growth project in Texas that it expects to improve the coverage ratio and allow for future distribution growth. If you can stomach a little near-term uncertainty, Buckeye might be worth a deep dive for the extra 1.5 percentage points of yield. 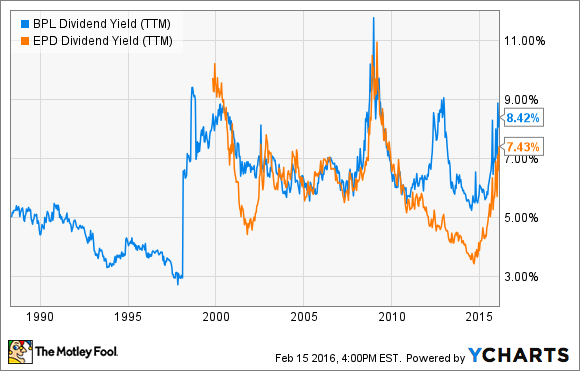 Can't forget the burn
It would be understandable if, having lived through Breitburn's distribution cut and steep share price decline, you decided you wanted nothing to do with oil and gas. But the truth is that this downturn has opened up some opportunities in good companies. Exxon, for example, hasn't yielded as much as it does today in nearly 20 years. Enterprise and Buckeye are also yielding more than they have in recent years. And, perhaps equally important, all three companies have long histories of annual dividend increases (Enterprise's streak is the shortest at 19 years). Sure, any one of them could cut their disbursements, like Breitburn, but history and current results suggest that's a risk worth taking on.