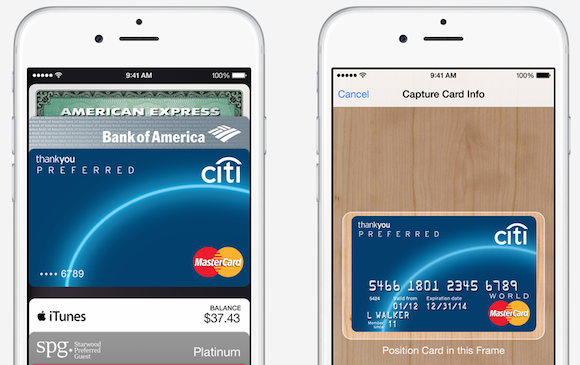 Facebook could help increase adoption of Apple Pay by including it in Messenger. Source: Apple.

David Marcus, Facebook's (NASDAQ:FB) vice president of messaging services, told an audience in Munich last week that he has an ambitious roadmap for Facebook Messenger in 2015. That roadmap includes ways for the company to generate revenue, but he said it won't include building a payments business on top of Facebook Messenger or WhatsApp.

Instead, Facebook wants to help remove friction from the buying experience. This shift opens the door for mobile payments providers to capitalize on Facebook's scale as it connects businesses with consumers. Specifically, Marcus wants to allow people to share private information -- like their credit card data -- with confidence.

Apple (NASDAQ:AAPL) is already working on solving that problem and offers an excellent mobile payments solution. Therefore, it would make sense for Facebook to work with Apple over competitors like Google (NASDAQ:GOOG) (NASDAQ:GOOGL) or PayPal. However, the need for a universal solution -- not just iPhones and iPads -- bodes well for competitors, but not necessarily Google and PayPal.

Opening up the lines of communication
Marcus said he wants to use Messenger to help businesses better communicate with customers. He gave the example of a customer trying to change a plane ticket after it's already been booked. He feels Facebook is well-positioned to tackle problems like that.

Of course, many consumers might be hesitant to offer businesses credit card data in a typical messaging app. As well they should be. Facebook could incorporate a way for customers to share credit card data without having to type in the information, providing a much more secure sharing platform. Alternatively, it could simply use Apple Pay to transmit those data to make purchases or change charges.

Considering Facebook is looking to make money by charging businesses to connect with customers, it shouldn't hesitate to bring on a partner like Apple or PayPal. Google might have more trouble getting in with Facebook to process payments considering the two companies compete closely in online advertising. Those transactions could offer a lot of valuable targeting information that Facebook would prefer Google not to have access to.

Stripe currently powers the back end of Apple Pay and provides the back end for Facebook's "Buy" button, which will allow Facebook users to buy products without leaving the website or app once it rolls out to more News Feeds.

Stripe could enable Facebook to build out its own feature that allows customers to securely share their credit card data and businesses to process payments within Messenger. The benefit would be that the feature could be universal, and Facebook gets to keep all of that credit card and purchase data to itself.

On the flip side, it's not clear that Facebook users want to share their credit card data directly with Facebook. However, as mentioned, since Facebook doesn't compete directly with Apple and PayPal, it shouldn't hesitate to offer alternatives to process payments. It would still get to glean data from users' interactions with businesses, after all.

For Apple, getting in with Facebook would be less of a revenue generator than about pushing the adoption of Apple Pay. While early indications are that a large percentage of iPhone 6 purchasers have already signed up for Apple Pay, those numbers may be skewed by early adopters. As more apps and retailers adopt Apple Pay, the opportunity for Apple increases as onboarding becomes easier.

Taking just a 0.15% cut on payments means Apple needs to process $1.2 trillion in payments to add 1% of incremental revenue over fiscal 2014. That's not going to happen within one app, but Facebook Messenger could provide Apple a better opportunity to get there.