Every year companies like Halliburton (NYSE:HAL) put out a list of risk factors in their annual report. It's a list of things that could -- and more often than not do -- impact a company's results. What's really interesting is that sometimes the least obvious risks are the ones that have the biggest impact.

Take Halliburton's list from last year's annual report. The company detailed about two dozen risks, including things like the loss of employees, new laws, and even the residual impact from the Macondo disaster. However, what's interesting about last year's list was that three other risk factors listed really stand out because, in hindsight, each was easy to overlook at the time but has since become a critical factor in the company's near-term outlook. Let's take a closer look at the risks most investors probably overlooked last year.

Risk No. 1: The price of oil isn't set it stone
For the past few years the price of oil has been rather stable, and very lucrative for oil companies. And then this happened: 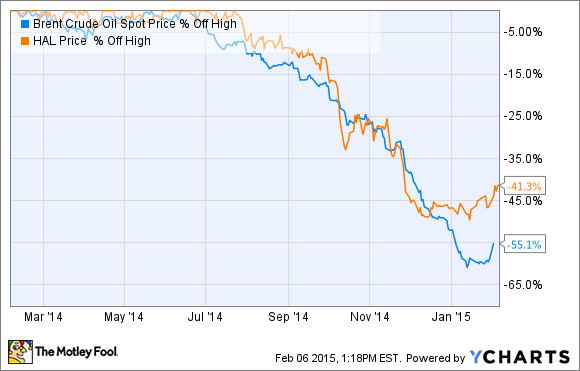 The return of volatility in oil prices was a risk everyone in the industry knew could happen, which is why Halliburton did warn investors that oil and gas prices were a risk to its business and therefore its stock price. Here's what the company had to say about it in its 2013 annual report:

Trends in oil and natural gas prices affect the level of exploration, development, and production activity of our customers and the demand for our services and products, which could have a material adverse effect on our business, consolidated results of operations, and consolidated financial condition.

The company went on to note:

Turns out that risk was bigger than anyone expected as the price of oil did turn due to surging supplies from non-OPEC countries and weakening demand. The plunge in the price of oil really accelerated when OPEC refused to cut its production capacity as it decided that it was better off defending its market share than the market price for oil. It just goes to show that sometimes the biggest risk is the one that is least obvious at the time.

Risk No 2: We need our customers' money
Another risk Halliburton highlighted last year is starting to impact its business this year. The company warned investors in its annual report that:

This warning was given at a time when capital spending by oil and gas companies was surging. However, one year later quite the opposite is true with its customers making big cuts in spending. Further, its customers are now demanding that Halliburton, and its peers, give them huge price discounts for services. With some energy companies refusing to drill altogether until oil-field service prices come down 40%. Again, an obvious risk in hindsight but one that was easy to overlook at the time the warning was given.

Risk No. 3: Merger mayhem
This last risk factor that I'll highlight is apropos given the company's recent announcement that it's merging with Baker Hughes (NYSE:BHI). The company said:

Our acquisitions, dispositions, and investments may not result in anticipated benefits and may present risks not originally contemplated, which may have a material adverse effect on our liquidity, consolidated results of operations, and consolidated financial condition.

Here the company is warning investors that future mergers or acquisitions might not work out quite as well as planned. That's something to keep in mind in light of the Baker Hughes merger. Overall, investors should keep two things in mind. First, one of the reasons why the company did the deal was because the merger is expected to save the combined companies $2 billion per year by 2017. 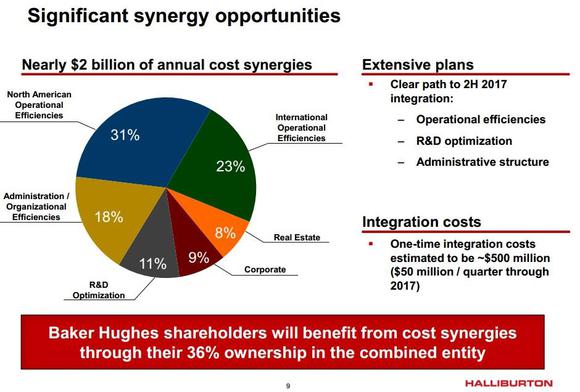 Halliburton's own annual report warns investors that it's quite possible that a merger might not result in the benefits it expects to receive. So, don't be surprised if there are hiccups down the road.

Further, another reason why Halliburton wanted Baker Hughes is because it wanted to catch up to Schlumberger (NYSE:SLB). However, it's not necessarily after its larger rival's size but its premium valuation. That said, it might never obtain that premium value because mergers don't always work out as planned.

Investor takeaway
Sometimes it's the risks that we least expect that send a stock down. That certainly would appear to be the case with Halliburton over the past year as the price of oil was the least of everyone's worries heading into 2014, but was investors' biggest worry by the end of the year. This is why investors can never forget that the risks we think are minor could end up having the biggest impact on a company's stock price.