Less than a month ago, Halliburton Company (NYSE:HAL) announced it was buying Baker Hughes Incorporated (NYSE:BHI) in a nearly $35 billion deal. The deal, which is merging the second and third largest oil field service companies in the world, is expected to put the new Halliburton in a better position to challenge Schlumberger Limited (NYSE:SLB) as the leader in the oil field service category. However, the real reason behind the deal isn't so much about challenging Schlumberger at the tops in terms of a higher revenue number, but instead, Halliburton is after a different number: Schlumberger's premium valuation.

Halliburton's current CFO Mark McCollum recently spoke at an energy conference, where he laid out his company's rationale for the deal. He started things off by saying:

There's always a lot of questions when you step out to do a major M&A deal, transformational transaction, that this transaction, very much, it's timing as well as the opportunity itself and how we evaluate it is very, very consistent with our continued focus on returns. We are returns-driven organization. Our compensation is returns-driven and we would not have done this deal, would not have suggested to do the deal, if we didn't believe long term that it was going to be able to enhance our ability to generate returns for our shareholders on a larger platform.

Clearly, he sees this deal driving better long-term returns for the company. That's important because of what those returns will represent to investors over the long term once the deal is completed and fully integrated. He went on to discuss what these returns should yield:

As we look at it, and while we are not looking at the deal just because we want to empire build and get larger in and of itself, one of the things that we always wrestle with in the market space is the notion that both entities on a relative basis to our larger competitor have a discounted multiple.

Here we get a glimpse of the number Halliburton is really after, and the real reason behind this deal. McCollum points out that the deal isn't about empire building, nor to just get bigger for the sake of being big. Instead, the company sees the deal as the key to closing the valuation gap between itself and Schlumberger, which we see in these charts. 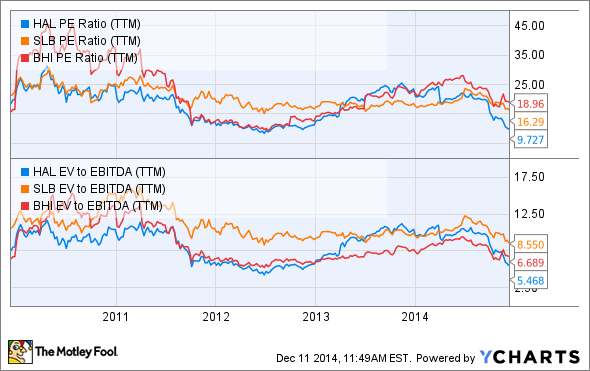 As both charts illustrate, Schlumberger has traditionally traded at a higher multiple to earnings than Halliburton. Sometimes the gap is rather wide, which, in Halliburton's view, is unfortunate because it thinks it should be the company that deserves a premium multiple, and it has the numbers to back that up.

Why Halliburton thinks it deserves this number
The reason this really bothers Halliburton is because its returns have always been far better than those of Schlumberger. McCollum pointed this out:

We can see the returns that he's taking about in this next chart. 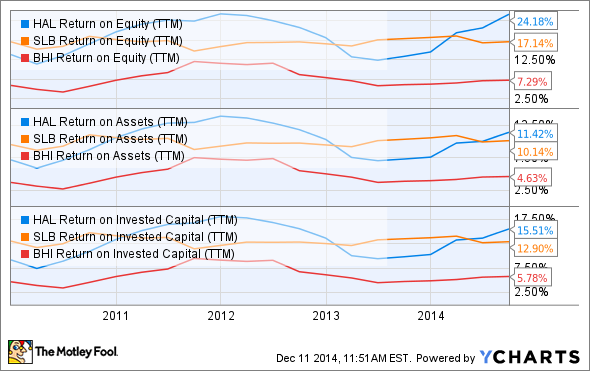 So, Halliburton's solution to closing the gap is to merge with Baker Hughes, as it believes that combining the two companies will deliver even better returns in the future. Those returns, when combined with greater scale, should earn the combined entity a multiple that's as good, if not better, than Schlumberger's.

Investor takeaway
The key takeaway in all of this is that the combination isn't about building Halliburton's empire to rival the size of Schlumberger, but to seize Schlumberger's premium multiple. This is what McCollum is implying:

We look at the combined powerhouse, the ability to create the bellwether organization and then to continue to generate the returns that we have traditionally done, suggests to us that ultimately this could be a boon to shareholders because we believe that the combined entity should get a higher trading multiple over time.

If the company succeeds in this plan, long-term investors will reap the rewards, as they'll own a piece of the best and highest-valued oil field service company in the world.