The oil-field services specialist's revenue slump in the first quarter isn't something you want to see in the middle of a recovery -- unless it is by design.

If you've followed the oil and gas market over the past couple of quarters, you'd probably assume Baker Hughes (BHI) would report an increase in revenue for the quarter, and possibly a per-share profit. That wasn't the case, though, as both revenue and earnings slipped.

Before you hit the panic button, keep in mind that these declines were actually by design, as strange as that may sound. Here's a quick look at why Baker Hughes didn't keep up with its large oil services peers this past quarter, but why investors shouldn't be too worried about it. 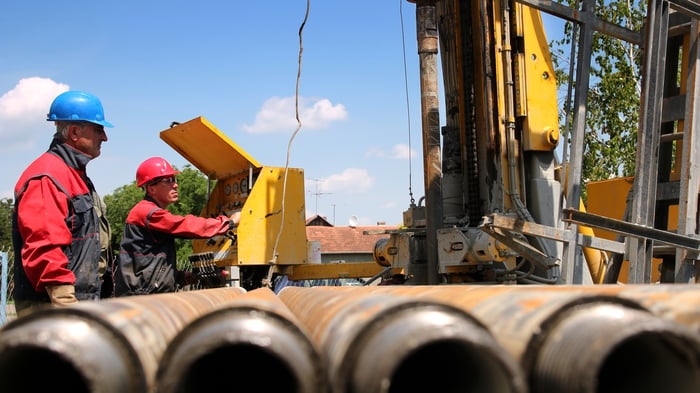 One thing that was noticeably absent from Baker Hughes' results this past quarter was any revenue gains for its North American business unit. The company's largest competitors -- Halliburton (HAL -0.92%) and Schlumberger (SLB -2.25%) -- announced decent revenue growth for this particular region. There were two reasons why Baker Hughes didn't replicate these results. The first is that in the prior quarter, the company struck a deal with CSL Capital Partners and West Street Energy Partners to combine all their pressure-pumping and well-cementing businesses into a single, privately held business. Taking that revenue away from its North American region equated to an $83 million change in revenue for the quarter. Management even announced last quarter that investors and analysts should anticipate a decline in revenue as a result of this move.

Another reason for the decline in North American revenue is that Baker Hughes' North American business is much more tied to offshore drilling rather than onshore and shale drilling. Even though we have seen shale drilling in the lower 48 increase drastically over the past year, activity in the Gulf of Mexico continues to be rather weak.

The one bright spot would appear to be the company's Latin American operations. This is a bit surprising considering that Both Halliburton and Schlumberger both reported that the activity in the region was flat to down modestly. Baker Hughes' results in the region don't look to be sustainable, though. A large chunk of those gains came from recovering about $84 million in bad debt from Ecuador by agreeing to take some government-backed bonds in lieu of a cash payment. Another thing worth mentioning about the overall profitability of Baker Hughes this past quarter was that the company incurred $121 million in impairment, restructuring, and merger-related costs. As the oil and gas market improves, we should see less and less of these impairment charges. Similarly, those merger-related costs should start to abate as it puts the finishing touches on the merger with General Electric's (GE 2.29%) oil and gas division.

While the onshore rig count increase in North America has been more robust than many had expected, the industry is still working to absorb excess service capacity. As this capacity is being consumed, we have seen labor and materials cost inflation in select product lines and basins. For most drilling-related product lines, with the demand growth we experienced this quarter, we believe we are on the cusp of a broader pricing recovery.

Not surprisingly, these are the same things we heard from both Halliburton and Schlumberger. The biggest difference here is that Halliburton has aggressively been putting assets into the field at slightly lower rates to maintain market share. Beyond the North American market, Craighead's comments are also in line with what we have heard from others thus far.

[W]e believe that the North America onshore market will continue to grow and service capacity will continue to be absorbed. For international onshore markets, activity has bottomed and we expect it will remain stable, with a few pockets of modest growth. And, while we expect there to be headwinds offshore throughout the rest of 2017, we are winning in the right places, as evidenced by our recent tender awards.

Baker Hughes' results do look a little off at first glance compared to its peers, but that is more a product of some recent corporate moves than anything else. Also, since Baker Hughes' business has deeper ties to the Gulf of Mexico than other oil services peers, we can expect that it will take a little while longer until that part of the market starts to recover.

In the meantime, the merger between Baker Hughes and GE's oil and gas division should close in the coming quarters. After the botched merger with Halliburton, it's always worth waiting until the ink is dry before assuming that the deal will get done. If it does, though, it will create a unique oil services and equipment company that may take investors a few quarters to wrap their heads around. Investors should be patient before making any significant decisions.