Please ensure Javascript is enabled for purposes of website accessibility
Log In Help Join The Motley Fool
Free Article Join Over 1 Million Premium Members And Get More In-Depth Stock Guidance and Research
By Tyler Crowe - Jan 27, 2017 at 8:44AM

Baker Hughes earnings saw a modest uptick on a sequential basis. Is this the pivot point we have all been waiting for?

For several quarters, Baker Hughes (BHI) and just about every other oil services company has been doing what they could to manage the downturn. Cost controls and multi billion dollar asset impairments and write downs have all been used to mitigate a decline in revenue. This quarter, though, we finally saw a reversal of these trends as the company saw its first sequential uptick in revenue in a long time. Here's a quick run down of the company's quarterly results and what investors should be watching in the coming months. 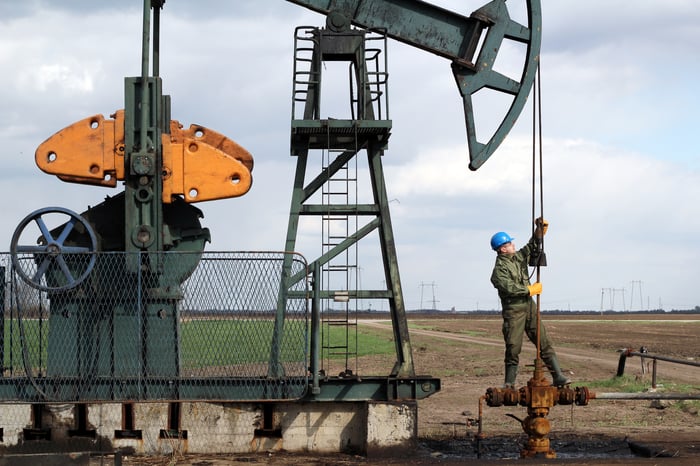 This past quarter was -- hopefully -- the turning point that investors have all been waiting for. Even though Baker Hughes' uptick in revenue was a pretty modest one on a sequential basis and is still down considerably from this time last year, it's a start. You also have to consider that the company has enacted several cost cutting measures that make it easier to generate profits at a lower revenue rate. As the company winds down all of its impairment and restructuring costs -- there were about $145 million worth this quarter -- it won't take much more of a revenue uplift to see positive earnings per share.

Looking at Baker Hughes geographic results, there were a lot of similar things happening to Schlumberger (SLB 0.68%) and Halliburton's (HAL -0.07%) results that were issued within the past week: Growth in North America and the Middle East offset continued weakness in other international arenas. Baker Hughes did note that activity -- or lack thereof -- in the North Sea hit the company particularly hard. One discrepancy here is that North American operating profits were still on the decline in spite of increased revenue. This is because most of the company's impairments and writedowns for the quarter were in this segment. Without those charges, we would have seen a much narrower operating loss. For the fiscal year end, Baker Hughes' results was a reflection of two things: Billions of dollars in writedowns, and the $3.5 billion in cash Halliburton paid Baker Hughes as a breakup fee for the botched merger. That cash injection proved to have come at the most opportune time as it gave the company cash to pay down debt, buy back some stock, and still leave the company with over $4 billion in cash on the books at the end of the fiscal year. Having that kind of available cash will give the company a lot of financial flexibility to pursue some new projects; especially all the new opportunities that the pending merger between it and General Electric's (GE 1.30%) oil and gas division could open up. CEO Martin Craighead's statements on the outlook for the oil and gas industry were pretty much the exact same thing that Schlumberger's and Halliburton's executives said on their own respective earnings releases. Basically, North American shale is looking promising today, and there are some other isolated pockets of the market that are picking up like the Middle East. Other than that, Craighead said he doesn't expect an earnest pickup in international drilling activity for a while.

The one thing that was unique about Craighead's statement was his view on the pending merger with General Electric:

[W]ith regard to the pending GE Oil & Gas merger, my excitement about the opportunities this transformative combination will deliver for our customers, shareholders, and employees, and the industry as a whole, has only grown since we announced the transaction in late October. GE Oil & Gas and Baker Hughes are an exceptional fit, with highly talented teams, similar cultures of innovation, and industry-leading capabilities. The integration planning teams are making good progress, the regulatory review process is proceeding as planned, and we continue to expect a mid-2017 close.

Before you get too optimistic about Craighead's statements on the pending merger. Here's what he said regarding the Halliburton merger

By combining two great companies that have delivered cutting-edge solutions to customers in the worldwide oil and gas industry for more than a century, we will create a new world of opportunities to advance the development of technologies for our customers. We envision a combined company capable of achieving opportunities that neither company would have realized as well – or as quickly – on its own, all while creating exciting new opportunities for employees.

Things are looking up in general for the oil services industry. Those companies that have a greater exposure to the North American shale market will perform better in the shorter term, but eventually the rest of the world's activity will pick back up because shale alone can't fulfill all the needs of the market over the next few years. Baker Hughes by itself looks to be in a better position, but the combination of it and General Electric's oil and gas assets could make it a very intriguing player in this industry. For the coming quarters, the biggest thing that should be on investors minds is the ability to get this deal done and smoothly integrating the two businesses. If that can happen, then this is a stock worth putting on your radar.