Baker Hughes (NYSE:BHI) was the target of suitors in 2016 . After Halliburton (NYSE:HAL) walked away from a proposed acquisition, General Electric (NYSE:GE) swooped in quickly to merge its own oil and gas business with Baker Hughes' and take a majority shareholder stake in the new business.

Thanks to these two major announcements and the improving outlook of the oil and gas industry, shares of Baker Hughes gained a very impressive 40.8% in 2016. After such a large gain, though, investors have to wonder how much juice is left to squeeze out of this stock. So let's take a look at why 2016 made Baker Hughes a much stronger company and what we can expect from this new GE-Baker Hughes business in the future.

When Halliburton initially proposed to Baker Hughes back in 2014, it put a kicker in the negotiated deal: It would pay Baker Hughes $3.5 billion if the deal didn't go through. At the time, it seemed like a non-issue because so many analysts assumed the deal would happen. As time went on, however, it became apparent that antitrust regulators weren't keen on it and that it would require significant asset sales to complete it.

So when Halliburton finally walked away, it left Baker Hughes $3.5 billion richer. In fact, the injection of cash was so significant that the company now has more cash on the balance sheet than total debt outstanding. This left Baker Hughes in a rather envious financial position. Immediately following the announcement of the breakup, Baker Hughes management said that it intended to use the cash to pay down about $1 billion in debt and buy back $1.5 billion in shares.

After getting the financial statement touch-up, though, General Electric came calling with its own offer to combine its oil and gas business segment with Baker Hughes' and create a unique company that would be co-owned by both GE and current Baker Hughes investors.

The current proposal, as it stands, would involve GE giving the entirety of its oil and gas division and $7.4 billion in cash for a 62.5% stake in the new business. That cash will be used to give current Baker Hughes investors a special dividend of $17.50 per share.

Based on the investor presentations from the two companies, the combination of GE's equipment manufacturing, its industrial Internet of Things analysis platforms, and Baker Hughes' contract services businesses will provide a unique offering to its oil and gas customers. 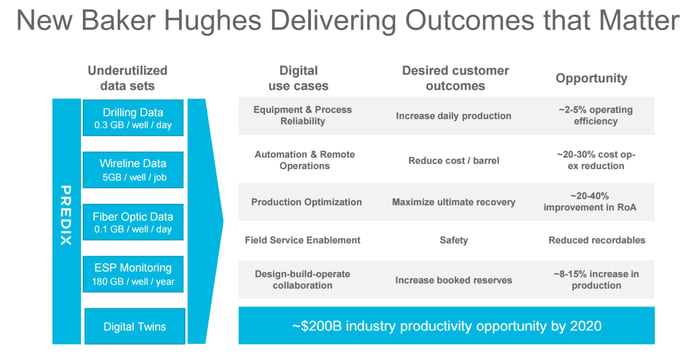 What is also promising about this deal is that there is a much greater chance of it getting regulatory approval than the Halliburton/Baker Hughes merger. Halliburton and Baker Hughes have a lot of overlapping services that would have consolidated the market. Baker Hughes and General Electric, on the other hand, combine contract services and equipment manufacturing, so there are fewer worries of monopolistic pricing from only one or two players in the industry.

Adding it all up, you have a company with a huge cash infusion, a deal to become a larger, more diverse stand-alone company, and an improving oil market. That recipe is pretty much how we got to Baker Hughes' 40% gain last year.

After such a large run-up on share price, you have to question whether there is any more juice to squeeze out of Baker Hughes' stock. After all, the company has perpetually underperformed both Halliburton and Schlumberger on margins and returns for years. 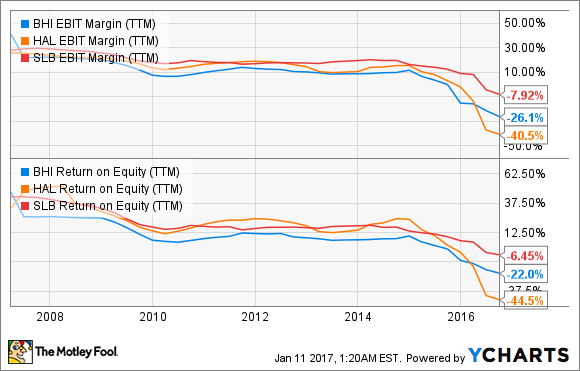 Based on the investor presentations from General Electric and Baker Hughes, the company they are looking to create is like nothing we have seen in the oil and gas industry, and so it is hard to judge based on past experiences whether it will lead to the returns that they hope it will create.

The other thing to consider here is the stock's current valuation, which is also a tricky situation. At today's stock price, we're looking at a company that is trading at a price to tangible book value of 3.0 times. These numbers by themselves don't scream overvalued, but there is something else to consider: that proposed special dividend from General Electric.

Let's assume that the GE deal goes through and existing shareholders get that $17.50-per-share special dividend. That means 28% of today's stock price is in a one-time cash payment. If we were to back out that cash payment from the current stock price, then we're looking at a company trading at a reasonable 2.2 times tangible book value.

Buying shares of Baker Hughes today is a bit of a speculative move. First, there is the risk that this General Electric merger doesn't come to fruition for one reason or another. The chances of this deal succeeding are much better than the Halliburton one, but we have seen a lot of failed dealings lately. So we can't rule out the possibility of the deal collapsing.

The other risky thing is that we're talking about combining two disparate oil and gas businesses, which may not necessarily pan out as management expects. Projections about synergies and growth opportunities always look great on paper and in investor presentations, but actually executing on those plans is a whole other manner.

That being said, the things that General Electric and Baker Hughes are saying about this deal could make it a monumental change in the way the oil and gas services industry works. Integrating equipment and technology, contract services, and data analytics into a single package has the potential to drastically improve efficiency and economics for the industry and could make this combined company's offering a high-demand product.

If the deal goes through and the two can realize some of the things they are saying, then 2017 could be another banner year for Baker Hughes, and it may be just the start of something even bigger.