When oil services giant Schlumberger (NYSE:SLB) issued results on Jan. 20th, it showed a company that is still trying to right size the business to today's oil market. While the company's $0.15 per share loss may not sound too inspiring for investors, it did show some signs that things are going to get better in 2017.

What was really surprising, though, was how management foresees the oil and gas recovery playing out. For anyone looking at investing in an American shale recovery, the words from CEO Paal Kibsgaard might throw a little caution to the wind. Let's take a quick glance at the company's results for 2016's final quarter and why Schlumberger's pointed words are worth considering when making an investment in this industry.

*in millions, except per share data. Source: Schlumberger earnings release.

We have started to see a modest recovery in drilling activity across the shale basins of the United States, but that isn't the case internationally. Declines in drilling activity are still happening in places like Latin America and Europe. The reason this matters more to Schlumberger than the other major oil services companies is that Schlumberger is much more exposed to the international market. As a result, Schlumberger's earnings were more or less flat on a sequential basis and saw an 8% decline from this time last year.

You can also see the signs of a recovery in the company's segment income. Its drilling and production segments saw modest sequential gains as rig counts and frack stage counts in the U.S. and in the Middle East pick back up, but spending on big ticker items like exploration and offshore development are still a ways off, as evidenced by declining revenue in its reservoir description and Cameron segments. 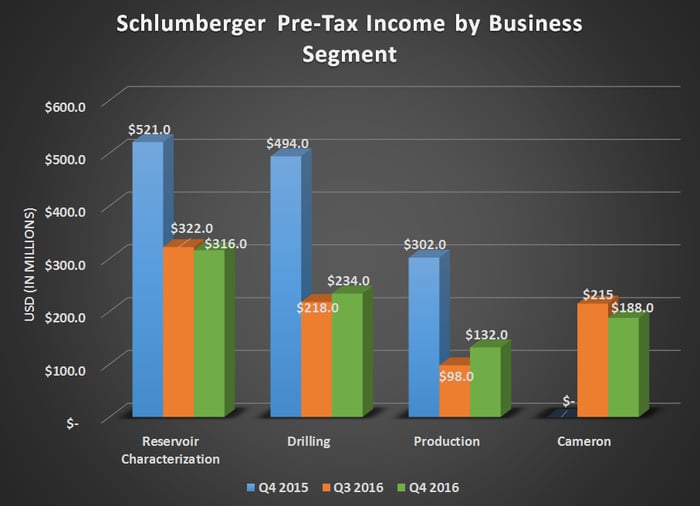 Backing out the lens a little bit, the big theme of 2016 was continued cost cutting to offset declining revenue. Revenue in 2016 was $27.8 billion, a 22% decline from the prior year. At the same time, though, cost of goods sold, research & engineering, and SG&A costs declined 15% compared to 2015. In fact, if we take out the $3.8 billion in impairment charges and the costs for the Cameron merger, then 2016 net income would have been $1.91 billion versus $1.90 billion loss it posted in the year. This lower cost base should really reap rewards in the coming year as capital spending picks back up. 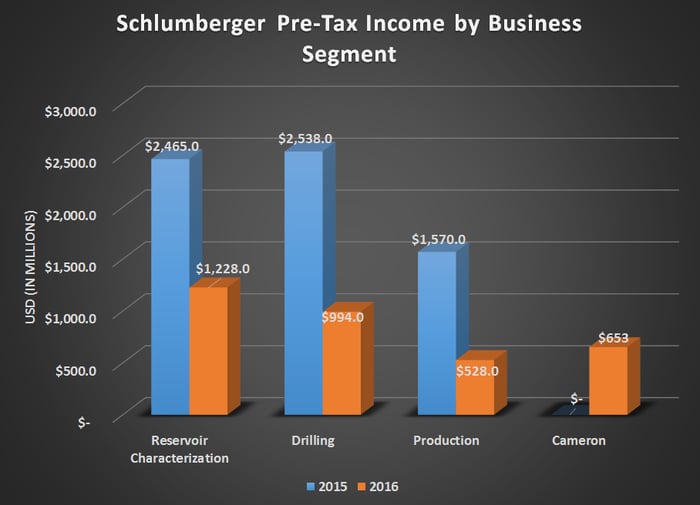 Also, it's worth noting that all of those large asset impairment charges and other non-cash charges didn't impact Schlumberger's cash flow situation. Free cash flow for the year was $2.54 billion. Not quite enough to cover its dividend payments for the whole year -- something worth watching in 2017 -- but close enough that it shouldn't raise too much concern. After all, 2016 was possibly one of the worst years in decades for oil services companies.

As part of the company's press release, Kibsgaard's statement pretty much confirmed what we have been seeing in the oil market for the past several months: Increased drilling activity and spending in the oil patch is almost exclusively happening in North American shale. From an investors standpoint, that sounds like a great thing. There was one small point he made, though, that might give investors caution.

We expect the growth in investments to initially be led by land operators in the North America, where continued negative free cash flows seem less of a constraint, as external funding is readily available and the pursuit of shorter-term equity value takes precedence over full-cycle return on investment. E&P spending surveys currently indicate that 2017 E&P investments will increase by around 30%, led by the Permian basin, which should lead to both higher activity and a long overdue recovery in services industry pricing.

He goes on to discuss that international E&P investments have yet to see a similar uptick because those operators are "more focused on full-cycle returns" and "governed by the operators free cash flow generation."

There is a lot to unpack in these statements for investors. On the one hand, it suggests that we could see a quick recovery for any company that has exposure to shale drilling in the U.S., both from the operators that produce oil and the service companies contracted for the work.

On the other hand, though, the idea that these shale operators are not constrained by their negative free cash flows should be a concern for investors looking longer term. One thing that made this recent decline so difficult for exploration and production companies is that too many were focused on growth rather than generating returns on their invested capital. As a result, companies headed into the downturn with bloated balance sheets. If those same companies haven't learned their lessons about the need to generate returns and operate within their cash flows, investors really need to question whether these kinds of companies are the kind of businesses worth owning over the long term.

Keep in mind, though, that Schlumberger's business is much less reliant on shale development than its largest competitor Halliburton. So in some ways it's in the company's interest to throw some shade on the long term viability of shale and why international operators are better positioned to generate sustaining revenue and cash flows for oil services companies.

Schlumberger got through this tough year, but it took its fair share of hits from the market. Compared to other oil services players, Schlumberger's recovery may be a little slower simply because of its higher exposure to international and offshore markets. So don't be surprised if 2017's results show very modest gains while other shale-focused oil services companies show a much stronger performance throughout the year. Based on Kibsgaard's statements on North American shale, though, investors will want to be very selective when making investments. If companies continue to rely on external funding for growth, then we could be set up for more headaches down the road.