Baker Hughes' management sees some better times ahead for one market, but another is still headed down.

Baker Hughes (BHI) is in the midst of a major transformation. The big news, of course, is the pending merger between it and General Electric's oil and gas division, but there's also the joint-venture project with its North American fracking business.

To better understand why the company is making these kinds of moves, it helps to see how management views the current oil and gas market as well as where it thinks the market is headed. In that spirit, here are several quotes from the company's most recent conference call that give an idea of what Baker Hughes' management thinks of the situation on the ground. 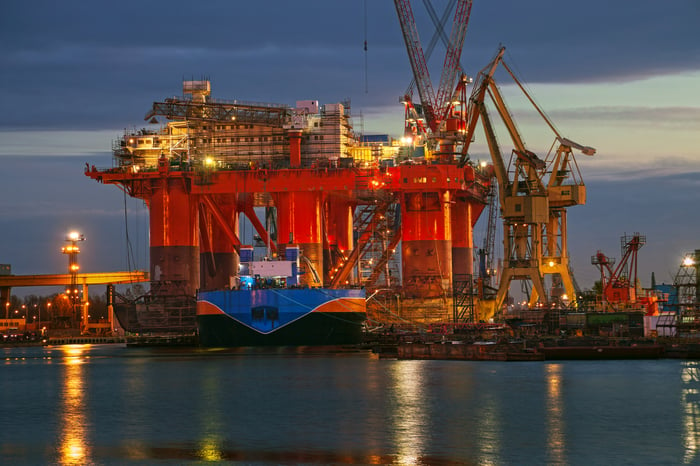 The North American market is strong, but that doesn't mean big profits

When it comes to investing in oil and gas as of late, it seems that North American shale has pretty much been the only game in town. As much as we have seen production grow, though, few oil-services companies have benefited from the jump in activity thus far. Here's what Martin Craighead, Baker Hughes' CEO, had to say about the why this was the case:

The ramp-up in North America has been more robust than many had expected. Along with this growth, we've had to work through the challenge of supply chain tightness, with labor and materials cost inflation impacting select product lines and basins. In addition, while we have seen signs of service capacity absorption in select product lines in some North American basins, there's still a fair amount of excess service capacity that must be absorbed before service pricing gains can take hold more consistently.

So the demand is there, and certain small pockets of the service business are doing well. But with so much idle equipment and excess work crews, producers get extremely competitive pricing, to their benefit.

In a follow-up question on the North American market, more specifically the U.S. Gulf of Mexico, Craighead isn't ready to say that the worst is over:

So I'm not willing to call a bottom on the Gulf, but we should hopefully be near it.

One thing that stood out in both Schlumberger's and Halliburton's conference calls this past quarter is that both CEOs highlighted weakness in the international market. Craighead echoed a lot of that sentiment in his prepared statement. Some smaller markets are doing OK, such as land drilling, but that's about it:

In the first quarter, we saw a very different set of market behavior and challenges as customers remain cautious on spending in light of market uncertainties. And as I said earlier, customer confidence in commodity prices remains one of the key elements that is required for a sustained industry recovery. In the international land market, while we believe activity has bottomed and that is a positive, we continue to see pricing deterioration. Offshore, both internationally and in the Gulf of Mexico, activity and pricing continued to decline as the current oil-price environment dampened customer confidence in achieving economic returns using existing technology for those longer-cycle projects.

Based on these remarks, it looks as though the international land segment is in the same place as North American shale was nine months ago. Considering that profits are hard to come by in the North American market today, it's not a stretch of the imagination to foresee international markets taking a long time to pick back up again.

What does the market need?

Rather than simply saying that a market is either picking back up or at the bottom, Craighead also reiterated some of his points on what it's going to take from the oil and gas markets to get back to profitability for the oil-services companies:

[T]he supply/demand surplus had to be balanced, allowing commodity prices to improve. Now since then, we've seen OPEC's implementation of production cuts, but at the same time, we've also seen significant growth in U.S. land rigs, along with an increase in production. In addition, inventory levels have remained stubbornly high while more recent projections for global oil demand growth have been scaled back. Second, we said that commodity prices needed to stabilize and be sustained in the mid- to high-$50 range for confidence in the customer community to improve and investment to accelerate. And third, we said that activity needed to increase meaningfully before excess service capacity could be absorbed and pricing recovery could take place.

Do keep in mind that this conference call came before the most recent OPEC decision to maintain the same levels through 2018. Yet this statement still applies. As long as U.S. land drilling can offset any demand growth or declines from other production sources, we are going to more or less remain at this first phase that Craighead has laid out.

Most of the things Craighead pointed out this past quarter were long-term trends that may take a year or two to play out. On the shorter-term side of things, CFO Kimberly Ross laid out a few things that investors can watch for in the coming quarter:

[B]ased on current activity growth trends, in North America, we are forecasting revenues in the second quarter to modestly increase sequentially as activity growth in the U.S. onshore well construction product lines is forecasted to more than offset the seasonal decline in Canada and ongoing activity reductions in the Gulf of Mexico. Internationally, we are expecting revenues to remain relatively flat sequentially as offshore activity reductions and ongoing pricing deteriorations are forecasted to be offset by pockets of growth onshore and the seasonal uptick of our Europe/Africa/Russia Caspian segment.

It's not always the best thing to look at short-term metrics as a gauge of the health of a business, but some of the things Ross has mentioned here are a decent measuring stick for next quarter. Managing these downturns well means forecasting where the small pockets of growth will be and orienting the business to capitalize on those pockets. So it looks as if the big thing to watch next quarter is Baker Hughes' well-construction business, as it should be a primary driver of North American earnings.