2016 was an interesting year for Halliburton (NYSE:HAL). Not only did the oil-field services company work through one of the largest downturns in the history of oil and gas, but it also had to deal with the financial fallout from a major acquisition blowing up in its face. When it reported fourth-quarter and fiscal 2016 earnings this week, the company showed that it had taken a big blow, but was ready to move on to the next big thing in the oil and gas market. Let's take a quick look at the company's results for the year that was, and see what could be in store in the coming quarters.

By no means was this a great quarter for Halliburton by historical standards, but there were some improvements. One thing that is worth noting is that its North American business segment turned a profit in the fourth quarter. With 45% of revenue coming from this segment, it's critical to see this part of the business return to operational profitability.

One thing that does suggest the company can at least get to decent margin performance is the fact that it has been making pricing concessions to its customers for several quarters now. Weak oil prices forced Halliburton to share some of the financial burden. Now that equipment is being put back to work, though, don't be surprised if Halliburton and others start clawing back some of those concessions. 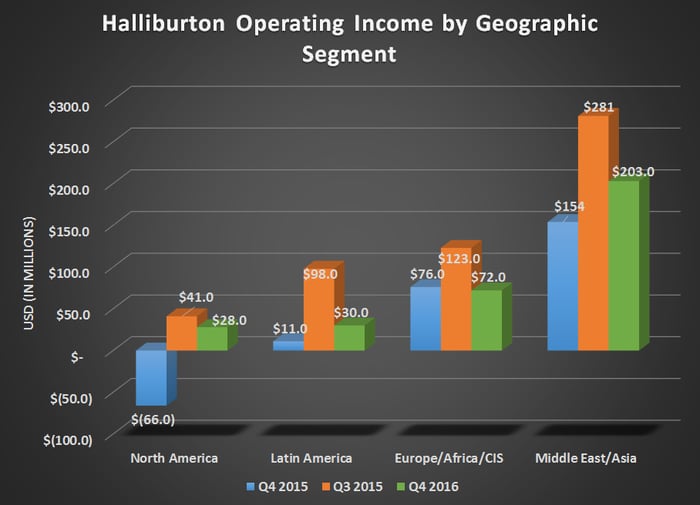 Among the year-end numbers, there isn't that much that pops out as extraordinary. Halliburton ended 2016 with a $6.69 per-share loss. Much of that loss, though, was the $7.4 billion in charges related to asset impairments, goodwill writedowns, and the $4.06 billion it had to charge for the termination of the merger with Baker Hughes (NYSE:BHI). So when looking at the company's year-end results, do keep in mind that those are heavily skewed by one-time items that probably won't have much of a material impact on the business in the coming year. Looking at operational income, we see that international markets held up rather well throughout the year, while the North American market suffered. 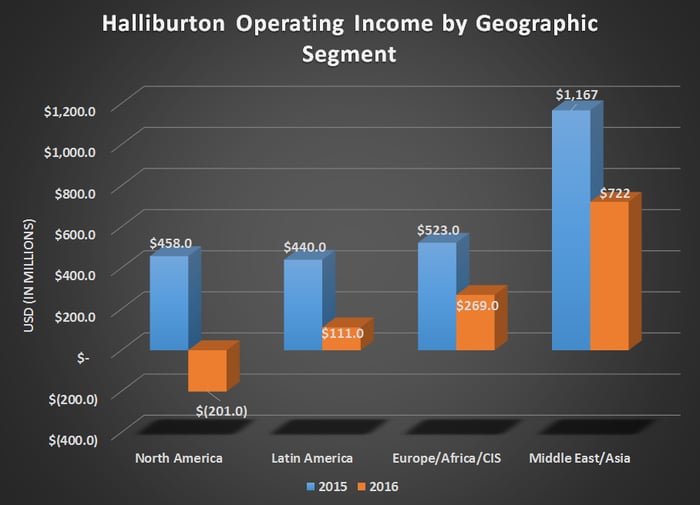 The one thing that the company can really look forward to in 2017 is increased drilling activity across North America. Of the large diversified oil services companies, Halliburton is the most heavily tied to the North American -- and specifically shale -- market. Management even noted in this press release that it is gaining market share in North American land drilling, and that its plan for the rest of the year is to use the combination of larger market share and increasing drilling activity to increase returns. This will be imperative because this part of the business cannot continue to be the largest revenue segment of Halliburton's overall business and not produce a respectable return.

One common theme that oil services executives have been referring to as of late is that there has been a bit of a bifurcation in the oil market. While North American activity is picking up, the international markets have not quite picked back up yet. Here's what Halliburton CEO Dave Lesar thought of the matter:

Despite the positive sentiment surrounding the North American land market, it is important to remember that our world is still a tale of two cycles. The North America market appears to have rounded the corner, but the international downward cycle is still playing out.

In the international markets, low commodity prices have stressed budgets and have impacted economics across deepwater and mature field markets, which led to decreased activity and pricing throughout 2016. Despite these headwinds, we maintained our margin in the Eastern Hemisphere for the fourth quarter. We do not expect to see an inflection in the international markets until the latter half of 2017.

Not surprisingly, Schlumberger (NYSE:SLB) CEO Paal Kibsgaard said something similar when Schlumberger issued earnings last week. He explained that in his view the reason for this isn't necessarily because returns are good enough in North America to justify more spending, but because those companies are starting to have access to outside capital. Conversely, international companies are more likely to wait until internal cash flows can support more spending.

Hallburton does look to be getting back on track thanks to improving activity in the North American oil patch, initiating cost cuts across the business, and capturing greater market share. However, it does have a bit of a hurdle to get over because of all that money it had to shell out to Baker Hughes for the termination of its merger. It isn't in any way a company-killing event, but it's never encouraging to see that much cash go out the door with nothing to show for it.

For the rest of the year, the big focus will be on finding out what kind of returns Halliburton can get to with its North American business. This is going to be the driving force for Halliburton in ensuring it has a big leg up over the competition. If it can get back to generating decent returns on its North American segment, then things will look much brighter.