Fourth-quarter earnings are in for specialty flooring retailer Lumber Liquidators Holdings (NYSE:LL), and the results are more of the same lackluster numbers that have become the norm for the past year. The highlights:

Needless to say, those aren't the turnaround results investors have been hoping for, and the stock is absolutely getting destroyed as a result: 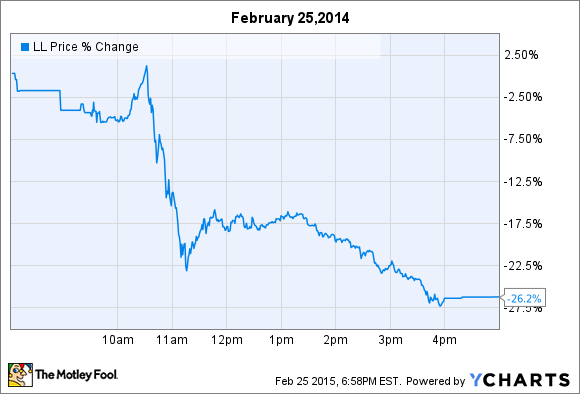 But the news is not all bad once you get past the first few paragraphs of the earnings release. Let's take a closer look at three key areas we reviewed in the earnings preview.

1. Comps finally rebounding?
While comps were down, the number of customers invoiced actually increased 1.1%, and that's definitely a positive. However, the comps decline was driven by a 5.3% decline in the average sale.  In the earnings release, CEO Robert Lynch said traffic continued to accelerate in the quarter, with the number of customers invoiced increasing 8% in December.

Furthermore, comparable sales in the current quarter were up 12%  through Feb. 23. The average sale, though, is down 4.7%, so it's unclear how this will impact margins. It's also important to remember that this period last year was the hardest hit by winter weather, so the comparison bar is relatively low. Nonetheless, if the results hold for the next five weeks, that's a good sign.

2. Expansion plans and finances
In 2014, Lumber Liquidators opened 34 new stores -- a 10% increase in the store count -- and remodeled 17 older locations. For 2015, the company expects to open between 30 and 35 new locations and to convert 15-20 stores to the new expanded showroom format.

The company also spent another $15 million on property and equipment in the quarter, likely tied to the newly consolidated East Coast distribution center and the product testing lab it is building at the facility. This is an important step for the company as it expands its internal manufacturing capacity. This year, the company expects to produce 10% of its own products in-house, but frankly it's too early to call how much of an impact -- to the positive or negative -- this strategy will have. Nonetheless, management's methodical approach is a good thing.

Lumber Liquidators doesn't carry a lot of cash on its books, but it ended the quarter with $10 million more in cash than it had at the start. The company has no long-term debt, but it does use a line of credit for liquidity, borrowing $53 million from it during the quarter; as usual, it repaid the full amount during the period.

The company bought back a very small amount of shares in the quarter -- roughly $50,000 worth -- as it apparently made the decision to focus on capital expansion and building up its cash position. Still, I wouldn't be surprised to learn that Lumber Liquidators has acquired more during the current quarter. As I wrote in the earnings preview, I'm torn on the buyback program: It does increase per-share value, but the company runs with a very narrow margin of safety, relying heavily on its revolving credit facility for liquidity.

So far it hasn't been an issue. Hopefully this remains the case.

3. Inventory and cost controls
Lumber Liquidators ended 2014 with 25% more inventory than it had the year before, which is reasonable based on the combined 10% increase in store count, the consolidated East Coast distribution operation, and the plans to open another 30 stores in 2015. Furthermore, the company had issues meeting demand for certain products for much of 2014, so this could suggest we can finally turn the page on the sourcing problems.

The company's efforts to produce as much as 10% of its product internally in 2015 could both further reduce sourcing challenges and potentially increase margins. Gross margin was squeezed again in the fourth quarter, to 39.2% versus 40.8% in the prior-year period. This was driven by product mix, according to the earnings release, as well as promotional and point-of-sale discounting. The company is also transitioning its Bellawood product line to updated products, which means adding to the promotional discounting as the company sells through older product.

Looking ahead
The company is guiding for 2015 gross margin between 39% and 40%, in line with the 39.9% in 2014, but a decline from the 40%-plus gross margins seen in prior years. However, it's not completely clear if this is the "new normal" or related to the shift in product. Management said margins will be higher in the second half of the year.

Management is guiding for full-year sales between $1.14 billion and $1.21 billion, with a modest single-digit increase in comps for the year. Earnings per share are expected to increase from $2.31 in 2014 to between $2.50 and $3 this year, based on the share count at the end of the fourth quarter.

Final thoughts
It's tough to call whether the jump in sales early this year is based solely on the comparison against last year's terrible winter, or whether it will turn into a sustained trend. The important thing is that Lumber Liquidators' management is taking a conservative approach to its sales guidance, versus last year's somewhat overconfident growth forecast.

The investments in improved distribution, product development, and expanded store count could all provide for upside both in the next year and for years to come, especially when the housing market recovers. The stock finished down more than 25% the day of the earnings release. Will it represent a great entry point? Only time will tell.