In yet another twist to the ongoing saga of Sarepta Therapetics (NASDAQ:SRPT) and its experimental Duchenne muscular dystrophy drug eteplirsen, CEO Chris Garabedian exited late Tuesday, seemingly out of the blue.

From the information available at this early juncture, it appears Sarepta's board of directors forced Garabedian out due to his combative relationship with the Food and Drug Administration.

Sarepta, under Garabedian's watch, has been pushing for accelerated approval of eteplirsen based on a small midstage trial and a lengthy follow-up study. The FDA initially tanked the idea in November 2013, subsequently relenting under public pressure from various Duchenne muscular dystrophy, or DMD, advocates; but then it delayed the drug's regulatory filing last October, citing doubts over the company's data collection in estimating the amount of dystrophin production (the key protein that is deficient in DMD patients) in boys treated with the experimental drug. Garabedian then publicly blamed the FDA for delaying eteplirsen's progress, prompting a public response from the agency.

In short, Garabedian's relationship with the FDA appears to be...problematic, potentially forcing the board to abruptly change course. The net result has been a highly volatile share price that has fallen ever farther from its former highs: 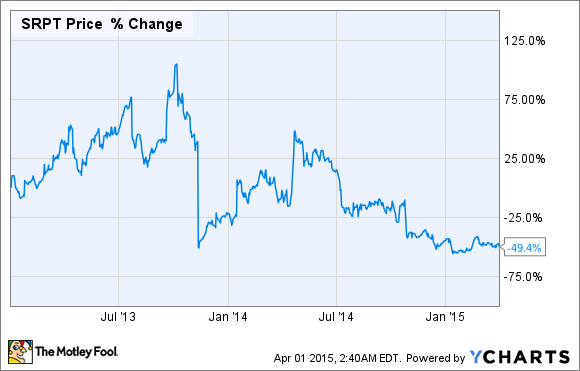 In a press release, the clinical-stage biotech announced that Chief Medical Officer Ed Kaye will replace Garabedian as CEO on an interim basis. Perhaps more importantly, the company still plans on finally submitting eteplirsen for FDA review by midyear.

In the wake of this news, should investors view this change in management as a buying opportunity?

Eteplirsen's value proposition is massive, but approval is not a slam dunk
Any disease-modifying DMD drug that can get past the regulators is widely expected to quickly reach blockbuster status. That's why BioMarin (NASDAQ:BMRN) paid a handsome premium for Prosensa and its DMD candidate drisapersen late last year -- despite the drug having a rather shaky clinical profile.

Unfortunately, the current generation of DMD drugs has failed to impress on the gold standard clinical measurement known as the six-minute walk test. The issue is that patients treated with these experimental therapies exhibit a wide degree of variability on this pivotal measurement, despite a reported marked increase in dystrophin levels.

Sarepta has thus lobbied the FDA to accept dystrophin production as a surrogate endpoint that could serve as the basis for approval. But a recent FDA workshop highlighted the fact that measuring dystrophin levels is still a work in progress, underlying the agency's concerns over Sarepta's clinical data on the matter. Put simply, I think it's pretty doubtful that the FDA is going to accept dystrophin measurements as a primary endpoint.

To be fair, Sarepta did show an impressive level of walking stabilization in its modified intent-to-treat analysis at week 96 for patients on the drug, compared to the placebo. However, Prosensa reported a largely similar result for drisapersen in its midstage trial, but this result evaporated in a larger late-stage trial. That recent history sits at the core of the FDA's concerns and eteplirsen's main challenges toward an accelerated approval.

What's next?
It will be interesting to see how the market reacts to this change in leadership, and whether the FDA relents somewhat following Garabedian's exit.

My bet, though, is that the agency is even more skeptical about Sarepta's dystrophin estimates after the latest workshop. Drisapersen's failure to improve clinical outcomes on the six-minute walk test in a late-stage trial should also remain a significant hurdle toward an accelerated approval for eteplirsen.

In short, I think that the FDA appears intent on forcing Sarepta to come back with late-stage data on the six-minute walk test, and perhaps with data on the drug's safety profile as well, before an approval is granted. And that's going to require money. Lots of it.

Indeed, the FDA is only showing interest in drisapersen at the moment because the drug has a well-understood clinical profile, based on multiple studies that have enrolled over 300 patients altogether. Eteplirsen's clinical profile, by contrast, remains cloudy due to the sheer lack of data.

So sticking to the sidelines is probably the best course of action with this speculative biotech for the time being.