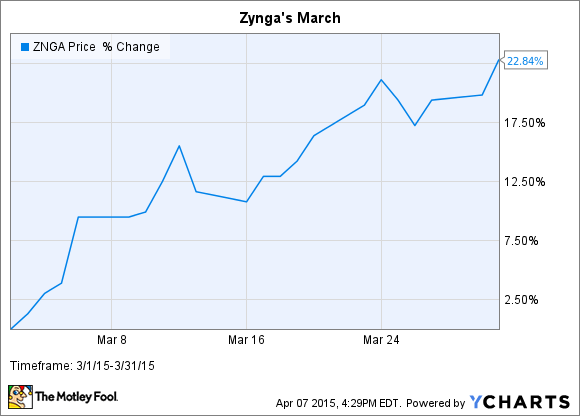 What: Shares of social-game maker Zynga (NASDAQ:ZNGA) zoomed up 23% in March, according to S&P Capital IQ data. Positive reviews about its new game, Dawn of Titans, and the disclosure that social-casino game Hit it Rich! was a top-rated iOS game in terms of average daily sales outweighed continued bearish sentiment that's continued to plague the company post-IPO.

So what: Early in the month, Zynga was the beneficiary of a positive review from GameSpot concerning its upcoming Dawn of Titans game. This game marks a departure from the Zynga of yesteryear and its FarmVille and Words With Friends games. Dawn of Titans is a player-versus-player strategy game that's heavy on action. Last year, the company bought mobile-game developer NaturalMotion for $527 million in an attempt to diversify away from declining demand for its core games.

Zynga's struggled with acquisitions before. In 2012, the company bought Draw Something maker OMGPOP for nearly $200 million and exited the business less than 1.5 years later with little to show for its efforts. It appears Zynga's NaturalMotion acquisition is performing better than the OMGPOP deal. In addition, it was later unveiled that its social-casino game Hit it Rich! was a decent hit on Apple's iOS. The freemium game was estimated to produce roughly $160,000 daily, good for No. 9 among the top-grossing iOS mobile gaming apps during February.

Now what: It's been a rough ride for Zynga, and this is probably just a reprieve from continued struggles. Once considered so important to social-media giant Facebook that the company was mentioned in Facebook's S-1 IPO registration statement as a potential risk factor, with Facebook noting that 12% of its revenue in 2011 was from Zynga, Facebook has mostly moved on from Zynga as it's adopted an ad-based business model. For investors looking for a long-term investment, I'd advise you to follow Facebook's lead and look to other investments for growth.