Specialty flooring retailer Lumber Liquidators Holdings, Inc (NYSE:LL) either has a special place in your heart, or it has a special place reserved for it in hell, depending on either your investing results or your position on the company's recent widely publicized battle against those who have accused it of selling hazardous and illegal laminate flooring. If you bought shares in early 2012, you're beating the market; if you bought any time in 2013, you're losing money. 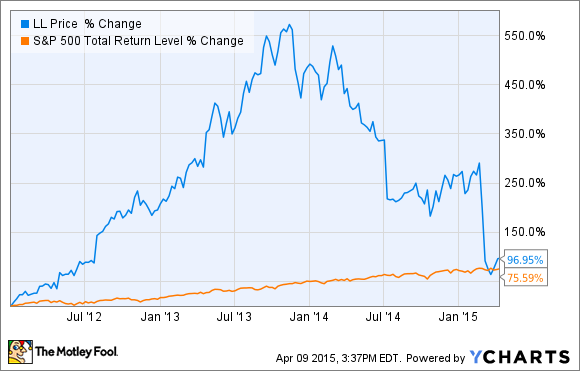 What really matters if you own shares, or are considering investing in the company, is what's ahead. Is Lumber Liquidators a stock worth buying today, or dead money? Let's take a closer look.

How did we get here?
It's certainly been an interesting journey. Here's the short version.

Over the past several years, Lumber Liquidators has grown its business substantially, expanding from 125 stores in 2008 to more than 355 today. At the same time, the company has consistently increased its gross margins, by its focus on sourcing direct from mills and its huge volume purchasing power, according to the company. Here's the impact of that on the company's stock returns: 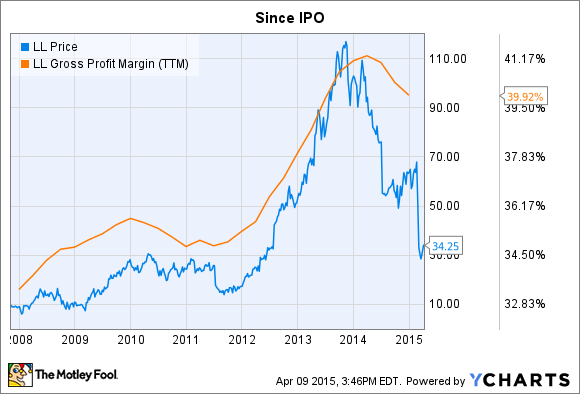 However, as you can see, the gross margin percent has come down hard in recent quarters, with management telling us to expect it to fall between 35.5% and 36.5% when the first quarter is reported in a few weeks.

What has led to the margin compression? Management says it's a product of inventory challenges, including the costs to consolidate on the east coast into a 1 million square-foot facility in Virginia, in addition to the impacts of the short-seller-funded attack on the company's sourcing practices. This attack, which culminated in a report on "60 Minutes" in early March, has seriously affected the company, with sales down almost 13% and margins hammered following the airing of the story.

Sifting through the noise
Since Lumber Liquidators management announced the "60 Minutes" story would air, there has been a lot of confusion and uncertainty driving the stock price. Frankly, some uncertainty will remain for the next several months, too. After the release of the "60 Minutes" story, the Consumer Product Safety Commission announced it was investigating the allegations against Lumber Liquidators, and according to CSPC chairman Elliot F. Kaye, "from a timeline perspective I think we're looking at months, unfortunately, not weeks until we can have some sense of the answers."

While it's not necessarily a good thing that the CSPC investigation will take months, there is some potential positive -- that is, if Lumber Liquidators management has been straight with the public so far. The biggest bone of contention that the company has had with the allegations made against involve the testing methods used by "60 Minutes" and others. The company argues these so-called "deconstructive" tests that have led to the claims of hazardous levels of formaldehyde emissions weren't "real-world" tests that accurately measured the kinds of emissions a consumer would reasonably expect to have in their home.

Well, it seems the CSPC agreed with that assertion. When asked directly if they would be using the deconstructive testing method, Mr. Kaye said, "We are not. So we're looking at testing in a method that most closely replicates the way that the products are used in the home. And I totally understand why CARB would require that kind of testing, but that's not what we're going to be doing."

While that is at least temporary vindication for Lumber Liquidators, there won't be any clear path forward until the CSPC announces the results of its investigation in a couple of months.

Business implications
The reality is, as long as there is some question about the safety of the company's products, there will be some hangover effect. In truth, even if the company is completely vindicated -- possible, but not 100% likely -- there will be a lasting impact on its business, in my estimation. The question is, just how large, and how long will it last? I can't answer that, and I don't think anyone can today.

The company will provide its full first quarter financial results on April 29, less than three weeks from now, and I fully expect management to be up front in reporting how the business has performed early in the second quarter, as well as reporting on the first quarter. The reality is, the company has to remain in crisis mode until there is clarity around the allegations, and a path forward based on that. Until then, the company has little choice but to continue keeping the market abreast of the impact on its sales.

Looking at the bigger picture
While investors should keep an eye on the short term, it's really the long term that matters the most. Frankly, if -- like myself -- you own shares in the company or choose to invest, you pretty much have to place your bets that management is being up-front and honest with its position on its products as being both legal and safe, and that any potential negative results of the CSPC investigation will be minimal at worst.

If this turns out to be the case, the long-term story remains about growth and scale. The company continues to open new stores, having opened four in the first quarter, putting it roughly on track to open 15 or 20 this year. Furthermore, the consolidation of its east coast distribution will drive cost out of operations, and the expanded in-house finishing capacity the company recently invested in should help address inventory challenges, and should also drive more profitable sales.

On the other hand, if the company has been trying to pull a fast one on investors and customers, we haven't come close to seeing the stock's bottom. At this point, it remains a matter of trust. The evidence so far leads me to put my money on Lumber Liquidators. We'll know by this summer if that was the right call or not.