Investors in FedEx Corp. (NYSE:FDX) and United Parcel Service (NYSE:UPS) have probably noticed some significant changes in their company's end markets in the last few years. Burgeoning e-commerce demand, changes in global trade patterns, and transforming parcel delivery preferences have adjusted the environment in which transportation companies operate. How have they changed the operations of FedEx and UPS, and what does it mean for investors?

The big three changes since the last recession are:

B2C e-commerce demand
Increasing B2C demand has forced both companies to invest in their networks to deal with a higher level of demand and an increased level of peak demand during the holiday season. UPS in particular has had issues dealing with peak demand. Both companies initiated dimensional weight pricing (whereby parcels are charged according to their dimensions as well as weight) across ground deliveries in 2015. They made the move because B2C deliveries tend to be less efficiently packaged--an issue for UPS and FedEx because, for example, a delivery truck could be filled by volume but still be able to carry more weight.

It's too early to draw any hard conclusions about how customers will respond to dimensional weight pricing, although the initial signs from FedEx are encouraging. However, UPS' difficulties in managing peak demand (largely created by B2C e-commerce growth) can be clearly seen in a chart of its adjusted operating profit in its U.S. domestic package segment, which was responsible for more than 60% of segmental profits in 2014.

Note the negative growth recorded in the last two fourth-quarter periods as UPS struggled with peak demand during the holiday seasons. 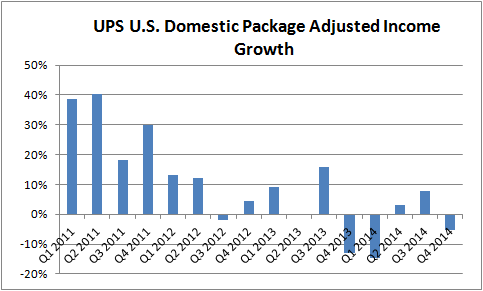 Customer preferences
The shift in customer preference for slower, less time sensitive deliveries has obviously affected revenue and profit generation. For example, the chart below illustrates how FedEx's operating profit composition has changed since the last recession. Ground segment income has grown strongly while express income is significantly lower. 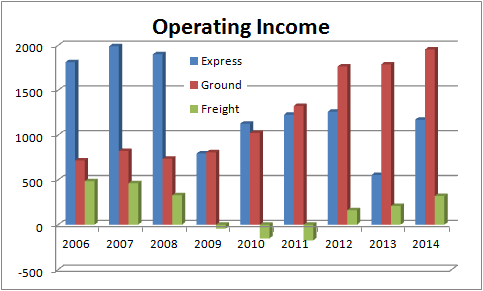 In fact, FedEx has instituted a program aimed at increasing the express segment's profitability by $1.6 billion by the end of 2016. If FedEx is successful, its free cash flow generation could increase significantly in future years.

"I think you're seeing this in all kinds of areas, lots and lots of regulations, many of them promulgated in the name of security, non-tariff barriers, like more difficult customs clearance activities in various parts of the world," Smith said. "I think you're having a very, very difficult period for the trade negotiators."

The following chart from an International Air Transport Association, or IATA, air freight market analysis illustrates the point well. When world trade is growing faster than domestic production the ratio in the chart should increase. However, the ratio flatlined from 2010-2013 (suggesting growth in world trade equal to domestic industrial production growth). Although IATA CEO Tony Tyler is forecasting "air freight markets to expand by 4.5%, outpacing projected growth in world trade (4%)," in 2015,  that would still not be the historic levels shown in the 1992-2008 period of the chart below. 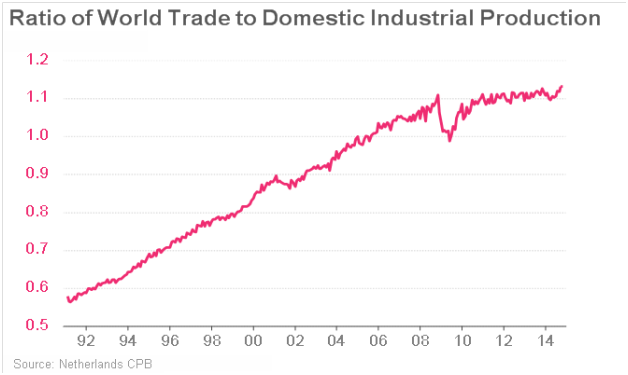 The slowing of growth in international trade can be seen when looking at international package operating income at UPS. The next chart shows how UPS has struggled to significantly grow this area since the last recession. 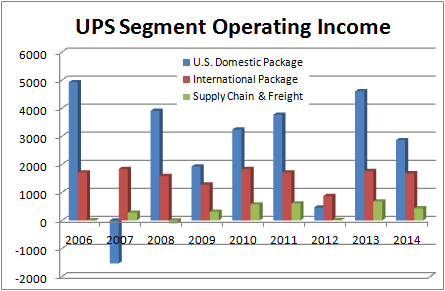 The takeaway
Both companies have seen significant changes in end demand since the recession, and their managements have adjusted accordingly. So far, FedEx has dealt with the increase in e-commerce demand better than UPS.

In addition, as outlined above, FedEx is on track to deliver on its express segment profit improvement program. Naturally, this would help the company deal with shifts in customer preferences away from faster, more expensive (express) deliveries. Meanwhile, both companies hope global trade picks up in 2015.

Ultimately, the long-term investment thesis for both stocks will rest on their managements' ability to successfully adjust to the changing business landscape.