Please ensure Javascript is enabled for purposes of website accessibility
Free Article Join Over 1 Million Premium Members And Get More In-Depth Stock Guidance and Research
By Rich Smith - Jul 30, 2015 at 8:03AM

But keeping the winning streak running is going to be very difficult indeed. 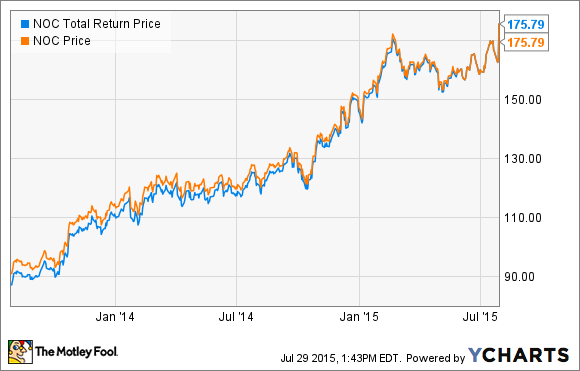 Northrop Grumman's stock has gone nowhere but up these past two years. But can it keep the streak going? NOC Total Return Price data by YCharts.

Which raises the question: How did Northrop Grumman transform a 2% sales decline -- even with slightly higher profit margins on those sales -- into a whopping 16% rise in profits?

And the answer to that question is...

Throwing caution to the wind and investing heavily in its own stock, despite the fact that it nearly doubled in price over the past two years, Northrop Grumman bought back shares hand over fist, slicing 10% off its share count over the past year. With fewer shares among which to divide up the company's profits, therefore, Northrop Grumman's earnings per share naturally spiked higher.

But while that's great news for owners of Northrop Grumman stock this week -- as they watch their stock soar as much as 7% higher on the earnings beat -- it may be less-than-good news for those shareholders in years to come.

The trouble with a too-high stock price
Your first clue that Northrop Grumman is setting its shareholders up for disappointment can be found in the paragraphs above. To wit, as Northrop Grumman's stock price soared, and the stock became less and less of a bargain, management refused to back down from its buyback plans and instead redoubled its buying. In so doing, the defense contractor got less and less bang for its buck.

And Northrop's been spending a lot of bucks -- just under $3 billion last year, and nearly $2 billion so far in 2015. In so doing, Northrop's exploded its debt load from less than $4 billion at the beginning of 2013 to more than $6.4 billion today -- plus $5.9 billion in pension obligations, according to S&P Capital IQ.

What it means to investors today
Aside from the debt load, though, why is overpaying to buy back a lot of stock bad news for Northrop Grumman stockholders? Well, let's take a look at a few more numbers.

According to management, Northrop Grumman generated $511 million in positive free cash flow last quarter. It's on track to keep that cash flowing, at roughly that rate, all year long, ending 2015 with cash profits of roughly $2 billion.

But at the company's current market capitalization of $34.2 billion, plus a further $3.8 billion in net debt, the company's enterprise value now stands at $38 billion -- 19 times free cash flow.

That might be an OK valuation if Northrop were expected to keep growing profits at 16% annually (and paying a 1.9% dividend yield, resulting in nearly 18% total annual returns). But in fact, most analysts who follow Northrop expect the tailwind from stock buybacks to fade in short order -- and for Northrop Grumman to post no better than mid-single-digit earnings growth over the next five years.

Meanwhile, Northrop's decline in sales in Q2, its shrinking supply of backlogged work to be done (down $1.2 billion in the last six months), and the fact that it brought in only $4.6 billion worth of new contracts to try to replace $5.9 billion worth of work done in the quarter all suggest that analysts are right to be skeptical about the company's growth prospects.

The upshot for investors
Long story short, 19 times free cash flow is an awful lot to pay for the 6.4% long-term annual growth rate that analysts foresee for Northrop Grumman. Shareholders reveling in this week's stock rally should enjoy it while it lasts...

Because it's not likely to.