"There are those that see JSF as the last manned fighter. I'm one that's inclined to believe that."

That's not me talking. That's Admiral Michael Mullen, former Chairman of the U.S. Joint Chiefs of Staff -- and according to him, the future of combat aircraft lies not with piloted fighter jets, but with robotic drones, also known as "unmanned aerial vehicles," or "UAVs."

And when it comes to publicly traded companies building UAVs, Northrop Grumman (NYSE:NOC) is top of the heap. (And that is me saying that). Over the past year, Northrop Grumman stock has trounced the broader S&P 500 stock market average, gaining 35% in value, and capping an 18 month long, near 100% rise in stock price. To find out what's helping the stock to hit such heights, and to get a better idea of whether Northrop Grumman stock can continue this run, we recently listened in on Northrop's Q2 earnings conference call with analysts. Here are five of the most important points that Northrop Grumman management made on that call.

At first glance, this all sounds like good news -- "higher than last year" being one thing you want to hear when it comes to profits for a publicly traded company. And yet, a review of S&P Capital IQ data on trends in profitability at Northrop Grumman shows that after rising steadily for at least five straight years, the stock's operating profit margin averaged 13.3% over the past 12 months.

Viewed in this context, management's promise of "a low 13%" operating profit margin for full-year 2014 suggests the trend of rising profitability per revenue dollar might have peaked.

Over the past five years, Northrop Grumman's operating profit margin has at expanded from 8.4% to 13.3% -- that's a nearly 60% improvement in profitability! But it's also just the start of the good news for owners of this stock. Per-share profits for shareholders have grown by more than 77%, from $5.22 in 2009 to $9.42 over the past 12 months.

How has this happened? In large part, it's due to share buybacks of the sort management described above. Total shares outstanding at Northrop Grumman have declined by nearly a third, from 306.9 million at the end of 2009 to just 209.1 million at last report. And, as Foolish investors know, the fewer the shares, the greater the concentration of profits among those that remain.

...but sales are still falling

In other words -- and due to no fault of its own, but thanks rather to decreased buying at the Pentagon and lower defense spending by a sequester-shackled Congress -- Northrop Grumman could very well report revenue this year that will be more than 16% lower than what it reported in fiscal 2010. It's heading for its fourth-straight year of declining revenues.

We continue to see growth in our international business partially offsetting the impact of domestic budget pressures. We expect this trend to continue in the second half of the year.

Now, Northrop Grumman execs are no dummies. They can see this sales trend as clearly as you or I can -- and they are taking steps to combat it. For one thing, management has done an admirable job of wringing every last cent's worth of bottom-line profit out of each revenue dollar -- as you can see below. 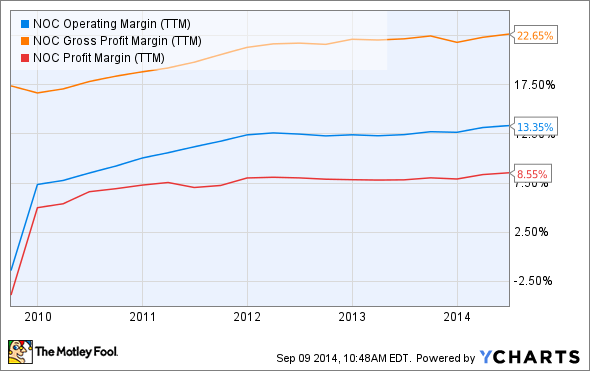 For another thing, faced with declining military buying at home, Northrop Grumman is looking abroad for new markets. It has made significant progress down under, for example, by snapping up multiple local supply chain partners in an effort to embed itself in the Australian economy -- one of the few places on the globe where defense spending is still growing. In particular, Northrop announced last year that it would buy the defense business of Australia's premier air carrier, Qantas Airways.

Problem is, as you can read in this column -- Northrop Grumman is currently in last place among major U.S. defense industry companies competing for international sales, getting just 10% of its sales from abroad. Management said it is targeting 13% of sales coming from outside the U.S. this year -- but it's not there yet.

We continue to see unmanned as a long-term growth driver for our company, particularly as international opportunities emerge. [As sales to] the Air Force Global Hawk program [decline, Northrop will] ramp up on development programs like NATO AGS and Triton.

Pacific and Indian Ocean nations such as Australia have become especially concerned about China's military expansion in recent years. Beijing's moves might be unsettling for China's neighbors, but they could be good news for Northrop Grumman stock.

With the Triton expected to sell for anywhere from $40 million to $80 million per plane, it's potentially a real money maker for Northrop.

So there. Just knowing about Triton's potential to boost Northrop's sales, and knowing that international buyers are interested in giving it those sales, is probably worth the price of admission to listening in on the company's conference call. And lucky you -- you didn't even have to!