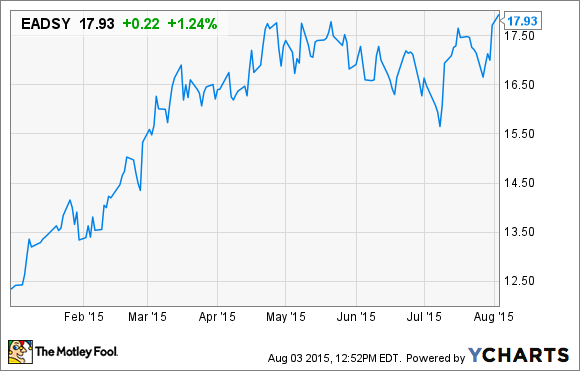 So far this year, Airbus shares have had a nice run -- and that run might not be done. EADSY data by YCharts.

One month ago, I clambered way out on a limb and made the heretical suggestion (to Boeing (NYSE:BA) fans) that Airbus (OTC:EADSY) stock "just might be a better bargain than Boeing."

I based that somewhat shocking assertion on the fact that Airbus was, as of last month:

Granted, there was still a wide gap between Airbus' performance and that of its archrival. Over the past 12 months, Boeing's $95 billion in annual sales at operating profit margins verging on 8% helped lift Boeing stock 20% in value, to a P/E ratio of 19.5.

But even so, Airbus' own strong performance, and delivery on its promises, was reflected in its stock price last week, when Airbus reported earnings. For H1 2015, Airbus has now reported:

With 348 new planes added to its order book in the first half, orders for aircraft during H1 2015 nearly doubled in comparison to H1 2014, rising 94.5% to $59.3 billion. The company's backlog of work to be done is now valued at $1.02 trillion. Simply put, Airbus is now firing on all cylinders.

Commenting on these first-half results, Airbus CEO Tom Enders boasted of improvements in "revenues, profitability and cash generation" and promised his company is "on track to deliver our 2015 guidance." But what is that guidance, exactly, and what does it mean for investors?

Actually, given how well the company performed in H1, Airbus appears to have rather modest expectations. Announcing its outlook for the rest of this year, Airbus predicted only "an increase" in revenues, a "slight increase" in operating profit from continuing operations, and an "increase" in earnings per share. Free cash flow for the year, while strong in H1, is predicted to be only "breakeven" in 2015.

As guidance goes, you could call the company's predictions modest, attainable, or even lowball. One thing you cannot say about Airbus' predictions, though, is that they make valuing the stock any easier. But here's what we do know.

Valuing Airbus
Airbus' earnings for the past 12 months now amount to $3 billion, according to S&P Capital IQ data. Its market capitalization is $56.7 billion. So, even assuming a small increase in earnings, the stock probably still costs about 18 times earnings or so -- slightly less expensive than Boeing's 19.5 on a P/E basis.

Valued on sales, Airbus stock costs slightly more than 0.8 times sales, versus Boeing's P/S ratio of just over 1.0. Once again, Airbus looks like a better bargain than Boeing.

Long story short, so long as Airbus keeps doing what it's doing, the stock could still be a better buy than Boeing.