Please ensure Javascript is enabled for purposes of website accessibility
Log In Help Join The Motley Fool
Free Article Join Over 1 Million Premium Members And Get More In-Depth Stock Guidance and Research
By Matthew DiLallo, Jason Hall, and Adam Galas - Sep 12, 2015 at 10:07AM

Most investors are pretty familiar with master limited partnerships, or MLPs. These are the entities known for owning oil and gas infrastructure assets and sending copious amounts of tax-advantaged income back to unitholders. However, an option that investors often overlook is the general partner that manages these MLPs. While GPs typically have a lower initial yield, they do offer a much higher dividend growth rate. This is because they not only own units in the MLP but also receive a few more streams of income from the economic general partner interest and incentive distribution rights in the MLP as well as from any infrastructure assets they own independently.

Given the favorable characteristics of a general partner, we asked our energy contributors for their favorite one.

Adam Galas: One of my favorite MLP general partners is Energy Transfer Equity (ET -0.89%), which, though it's the general partner of a vast empire of MLPs, is actually structured as an MLP itself.

In fact, there are three reasons I like Energy Transfer Equity enough to eventually add it to my own high-yield dividend growth portfolio.

Second, thanks to the oil crash and recent market correction, Energy Transfer's current yield is a very generous 3.9%, which, given its likely payout growth rate, makes it one of the best high-yield income growth stocks in America today.

Better yet, with a three- and six-month distribution coverage ratio of 1.17 and 1.2, respectively, the payout is highly secure, despite the collapse of energy prices.

Finally, I'm hopeful that Energy Transfer's attempted buyout of Williams Companies (WMB 0.53%) will ultimately prove successful because it would likely provide fuel for many more years of blistering distribution growth.

That's because, if the merger goes through, Energy Transfer's fast-growing distributable cash flow per unit -- up 61% in the first half of 2015 compared to the first half of 2014 -- will have the benefit of a staggering $60 billion of project backlog to power further payout growth.

Matt DiLallo: I like where Adam is going with Energy Transfer Equity, but I prefer its acquisition target, Williams Companies, for two reasons. First, if Williams does agree to a merger with Energy Transfer, it will create a real force to be reckoned with, as it will have a massive project backlog, as Adam mentioned. However, given that Williams already rejected a pretty generous offer, any deal would come at a pretty fat premium. So, in a sense, investors buying Williams now would be buying into Energy Transfer at a nice discount.

That said, there's a risk that Williams Companies doesn't agree to a merger with Energy Transfer, or anyone else. However, that's not a bad thing for investors either, as the company has a very solid growth plan. The first stage of that plan is to acquire its MLP Williams Partners (NYSE: WPZ), which is a deal that Energy Transfer would have it abandon. That said, an independent Williams Companies when combined with Williams Partners is a very compelling combination for investors, as we see on the following slide. 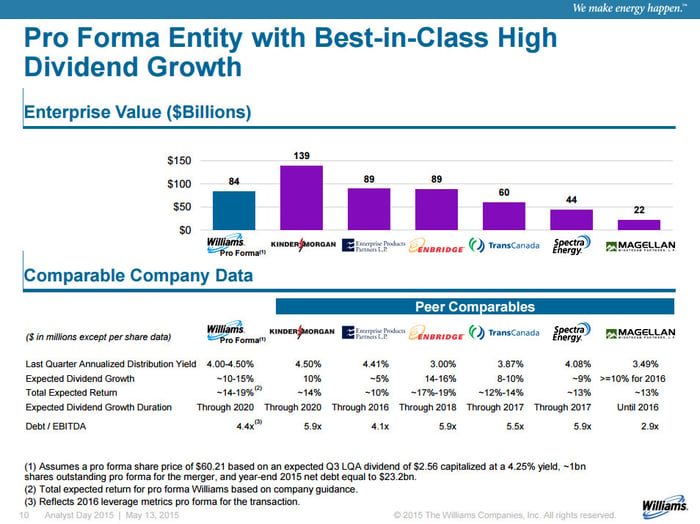 As that slide notes, pro forma Williams expects to deliver best-in-class dividend growth, while maintaining relatively low leverage. Virtually all of that growth will come from the company's robust $30 billion project backlog.

The way I see it, investors in Williams Companies win either way. They either get a nice premium to become part of a much larger Energy Transfer Equity, or they enjoy fast dividend growth by the company staying independent.

Jason Hall: Natural gas and NGL pipeline and gathering operator ONEOK Partners (OKS) and its general partner, ONEOK (OKE 0.27%), have both seen their stocks fall by half over the past year.

And while ONEOK Partners is facing some challenging times because of its exposure to extremely low NGL commodity prices in its gathering business, ONEOK, which only exists to manage its MLP, is in much better shape.

It may sound strange that a company -- ONEOK -- that wholly depends on a struggling business for its income is doing fine, but hear me out.

ONEOK Partners is at risk of having to cut its distribution if NGL prices stay down for an extended period of time, having already delayed some growth projects for the time being. But the income that it gets from its "toll booth" pipeline operations is substantial and consistent, and the MLP isn't really at risk, though common unitholders are at risk of seeing a dividend cut if things don't improve in the near future.