Microsoft hasn’t given up on Lumia phones yet.

Microsoft (MSFT 1.12%) could soon launch a new budget smartphone, the Lumia 550. The device, which was recently spotted in the database of Microsoft's European distributor, will reportedly have a 4.7-inch screen, 8GB of internal storage, a quad-core 1.1 GHz processor, and 1GB of RAM. It will also sport a 5-megapixel rear camera, a 1.2-megapixel front-facing camera, and have LTE support. The Lumia 550 is expected to replace the Lumia 640, which was launched earlier this year alongside its larger variant, the Lumia 640 XL.

The arrival of the Lumia 550 would contradict premature claims that Lumia and Windows Phones are "dead." It also reaffirms Microsoft's commitment to maintaining a mobile presence as Windows 10 launches across phones, tablets, and PCs to establish a unified operating system.

A sharper focus with fewer models
Windows Phone currently runs on just 2.6% of all smartphones worldwide, according to IDC's second quarter numbers. In the past, Microsoft launched an average of about one new phone every week, assuming that a scattergun strategy would reach the maximum number of users. That's why there are seven versions of the Lumia 640 with different screen sizes, a number of supported SIM cards, and LTE support.

In July, Microsoft announced plans to slash 7,800 jobs, mainly from Nokia's (NOK 0.61%) former handset unit, and take a writedown of over $7.6 billion on the business along with a restructuring charge between $750 million to $850 million.

Some people interpreted that move as the "death" of Windows Phone, but CEO Satya Nadella declared that he still wanted Microsoft to launch two new phones per year for the emerging market, enterprise, and flagship categories -- limiting itself to just six annual launches to "run a more effective phone portfolio."

Why budget devices matter
Cheaper Windows Phones have always been more popular than pricier flagship devices. The low-end Lumia 520, which was launched back in April 2013, is still the best-selling Windows Phone and accounts for 17.2% of all devices worldwide, according to AdDuplex's August numbers. The device originally cost about $100, but the price was halved to $50 by late 2013. The pricier flagship Lumia 920 and Lumia 925 devices respectively have market shares of 3.4% and 2.6%. 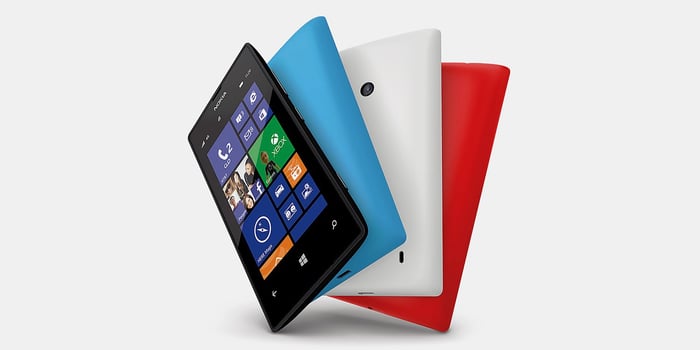 Selling sub-$100 smartphones will help Microsoft reach more customers in key emerging markets like India. During the second quarter, smartphone shipments in India surged 44% annually to 26.5 million units, versus expectations for flat growth in China this year. IDC predicts that the Indian market will surpass the U.S. as the second-largest smartphone market in the world by 2017.

But will the Lumia 550 be cheap enough?
International Business Times claims that the Lumia 550 should cost about €120 ($137) when it launches, making it much pricier than the Lumia 520. That's roughly the same price as the Lumia 640 that it's replacing, but it's much higher than the $50 to $100 price range for most emerging market phones.

AdDuplex's figures show that the Lumia 640 only accounts for 2.8% of the Windows Phone market. Yet that weakness can't be completely attributed to its price -- the Lumia 640 replaced the Lumia 630, which remains the second most popular Windows Phone in the world with a 9.4% market share. That device, which was the first dual SIM Windows Phone, actually cost more than the Lumia 640 when it launched last May.

This indicates that the major obstacle for the Lumia 550 won't be its price tag, but rather the popularity of the Lumia 630, which only costs about $80 today. The resilient popularity of the 520 and 630 also highlights another problem which Microsoft created through its scattergun approach -- many people are holding onto "good enough" Windows Phones for years without upgrading.

Eyes on the prize
But as Nadella stated in his open letter regarding Windows Phone's future, Microsoft is "moving from a strategy to grow a stand-alone phone business to a strategy to grow and create a vibrant Windows ecosystem." This means that it doesn't really matter which Windows Phone a customer buys, because Microsoft will install Windows 10 Mobile across all those devices to tether more users to cloud-based apps like Cortana, Edge, and OneDrive.

With Continuum, those users could eventually use their smartphones as mobile PCs, which will help Microsoft leverage its strength in PCs to counter Google's dominance of mobile devices. Microsoft is expected to reveal more information about its new Lumia devices and Continuum during its special press event on Oct. 6, so investors should stay tuned.