Microsoft (NASDAQ:MSFT) is reportedly working on two new high-end Lumia phones -- codenamed Cityman and Talkman -- for Windows 10, according to The Verge and Unleash The Phones.

The strategy of launching two similar high-end devices with different screen sizes is similar to Apple's (NASDAQ:AAPL) approach with the iPhone 6 and iPhone 6 Plus. But can these new Lumias gain any ground against Apple's popular smartphones?

Microsoft's mobile strategy
Microsoft's mobile strategy consists of three main steps. First, it sells Nokia-branded feature phones which have simpler versions of ecosystem apps like Bing Search and MSN Weather installed. Introducing those users to the Microsoft brand and ecosystem could convince them to upgrade to cheap Lumia devices like the new $70 Lumia 430. Lastly, Microsoft will install Windows 10 across all its smartphones, uniting them with the Windows ecosystem on tablets, two-in-ones, and PCs.

As a result, Lumia devices have sold better in lower-end markets than higher-end ones. According to market tracker Ad Duplex's April numbers, the entry-level Lumia 520 remains the most popular Windows Phone in the world with a 23% share of the market. The Lumia 630, a newer budget phone, was the second most popular device with a 10% share. The high-end Lumia 925 accounted for just 3%.

Stronger sales of low-end Lumia devices boosted unit shipments 18% annually last quarter, although total Windows Phone revenue fell 16% due to higher sales of cheaper devices. Despite that growth, Windows Phones still only accounted for less than 3% of the global smartphone market at the end of 2014, according to IDC.

But what about high-end devices?
Microsoft has gained ground in the low-end market because its low-end phones undercut Google's (NASDAQ:GOOG) (NASDAQ:GOOGL) cheapest Android One devices. But in the high-end market, premium Lumia devices are still marginalized by Apple's iPhones and Samsung's flagship Galaxy devices.

Cityman and Talkman probably won't change the former, but they could address the latter with Windows 10. If Microsoft can convince Windows PC users -- who account for over 90% of the market -- that their software can seamlessly synchronize with Windows 10 phones, its mobile market share could rise.

That's why Microsoft recently unveiled Continuum for Phones, which transforms smartphones into full-featured Windows 10 PCs when they're connected to larger screens. This means that powerful new Lumias like the Citytalk and Talkman could essentially replace laptops and PCs for users looking for an all-in-one device.

Apple's blind spot
High-end Lumias running on Continuum strike at Apple's lack of seamless unity between iOS and OS X devices. The closest thing Apple has is Continuity, which lets Mac users make calls and send messages using the iPhone's radio, as well as start tasks (in select apps) on one device and finish on another. 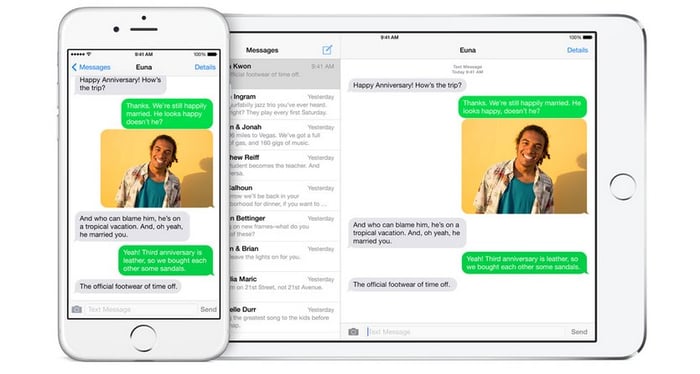 However, Apple doesn't have anything that lets users simply dock an iPhone or iPad and turn it into a full-blown Mac. This is arguably the same reason that Surface sales rose as iPad sales fell. Enterprise users could use the Surface Pro 3 as both a tablet and a docked PC while running the same software, but iPad users had to rely on mobile apps tethered to desktop systems.

If those same customers notice that they can replace aging desktops with high-end Lumia devices with Continuum, Microsoft could sell lots of new handsets to enterprise customers.

Don't count Microsoft out yet
Microsoft's new Lumia devices definitely won't steal the high-end smartphone market from Apple. However, they might "bridge the gap" between PCs and smartphones in a way that Apple never could. Doing so would let Microsoft leverage its dominant market share in PCs to gain ground in the mobile market against iOS and Android.