Matthew Frankel, CFP, Dan Caplinger, Jason Hall, George Budwell, and Brian Feroldi
(TMFMathGuy)
Author Bio
Matt is a Certified Financial Planner based in South Carolina who has been writing for The Motley Fool since 2012. Matt specializes in writing about bank stocks, REITs, and personal finance, but he loves any investment at the right price. Follow him on Twitter to keep up with his latest work! Follow @TMFMathGuy

Here at The Motley Fool, our contributors write about plenty of stocks, but what are they doing in their own portfolios? We asked five of our contributors that same question, and here are the stocks they bought recently -- and more importantly, their reasons for buying them.

Matt Frankel: One of the most recent additions to my portfolio is Howard Hughes Corporation (NYSE:HHC), a real estate company with a unique business model. Basically, the company's primary business consists of developing master planned communities, selling finished residential land to homebuilders, and building commercial properties in and around those communities. Among the company's most high-profile assets under development are the South Street Seaport in New York City and Downtown Summerlin in the Las Vegas area.

The company has experienced success with this business model in recent years, and the focus is definitely on long-term growth as opposed to generating quick profits. The experienced management team and board of directors (chaired by Pershing Square's Bill Ackman) are highly invested in Howard Hughes' success with a combined 31% stake.

Perhaps the best reason to buy right now is that it's trading right at its 52-week low -- around $114 per share as of this writing -- for reasons that have little to do with the company's long-term potential. Some is due to overall market weakness, but much of the decline is due to the oil-related slowdown in Houston's housing market, which is one of the company's key markets. 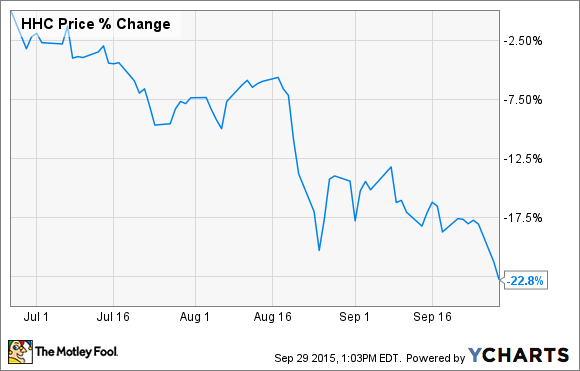 While Houston might remain weak for some time until oil prices recover, the company's other markets are thriving. I bought Howard Hughes because I see a long-term winner here, and I plan to hold for the long haul. In fact, if these low prices hold out, I may even buy a little more.

George Budwell: I bought Trevena (NASDAQ:TRVN) stock last month after the company announced top-line results for its second mid-stage study for TRV-130, an experimental treatment for acute pain in the post-surgical setting. Without going into the nitty gritty, the emerging clinical profile for TRV-130 makes it look like a strong candidate to replace morphine in the acute pain setting -- at least so far. As this market was valued at over $11 billion in the U.S. in 2014, this drug unquestionably has megablockbuster potential written all over it.

Given the consistency of TRV-130's safety and efficacy profile across these two mid-stage studies, I'm cautiously optimistic that it will succeed in its planned late-stage study. So, perhaps the big question going forward is the target population that might be most suitable for TRV-130.

The one potential drawback with this experimental drug from a commercial perspective is that it shares a common metabolic pathway with numerous other drugs that are administered intravenously, which may limit its use in the real world. Having said that, TRV-130 would only need to capture a tiny portion of this multibillion-dollar market to become a major value driver for the company, especially in light of Trevena's present market cap of $450 million.

Dan Caplinger: The auto industry in the U.S. has bounced back convincingly from the financial crisis, and Ford Motor (NYSE:F) in particular has sustained its reputation by successfully remaining the only member of the Big Three to avoid needing a bankruptcy filing in the aftermath of the 2008 credit crunch.

The primary reason I bought Ford earlier this year had to do with expected near-term troubles that most investors expected the company to face during 2015. The ramp-up of the new aluminum-body F-150 pickup truck promised to usher in a new era for Ford, but with it came production challenges in shifting existing facilities to work with the new aluminum components. At the same time, revamps in other key models have also held back growth, and so gains in profits early in the year didn't live up to the company's past performance.

Now, though, Ford is working through its setbacks, and low gas prices have made it far easier for the company to sell SUVs and pickups that weren't as attractive when gasoline was more expensive. Despite concerns about the state of the domestic economy, Ford looks well placed to continue strong and reward those who take advantage of its stock's tepid performance over the past year.

Jason Hall: One stock I've bought shares of four times this year -- twice in the spring and twice over the summer -- is Leucadia National Corporation (NYSE:JEF).

Leucadia National is best known for Jefferies, the investment bank that makes up a significant part of the company, but CEO Rich Handler has set it on a path of growth in a manner that's not all that different from, say, Berkshire Hathaway a few decades ago, in acquiring smaller operating businesses with predictable and regular cash generating capabilities.

Rinse, repeat. Over a few decades, you'll have a much larger, more profitable company.

Don't get me wrong -- I'm not saying Leucadia will turn into the next Berkshire, though it's not completely out of the question. But I do see a world of possibility with a very skilled and heavily invested CEO at the helm of this company.

In recent years, Leucadia's stock price has lagged, and for good reason, as its 2013 merger with Jefferies has yet to significantly move the needle. With that said, however, the stock has gotten crazy-cheap this year: 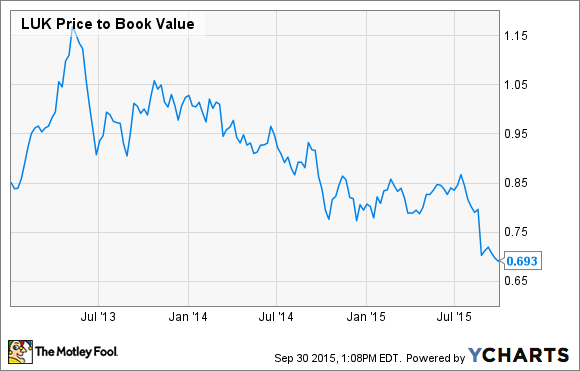 Price to book value, which measures the per-share value of the company's tangible assets net of debt, shows a company that's selling at a pretty significant discount today. I think I'll buy more as soon as Foolish trading guidelines allow.

Brian Feroldi: Like many biotech stocks recently, Gilead Sciences (NASDAQ:GILD) has been sold off hard for reasons that have little to do with its recent results, which were excellent. I think Gilead offers a great combination of growth, value, and a little bit of income, so I recently added some more to my portfolio.

Gilead holds the top-dog status in two disease states, HIV/AIDS and hepatitis C, as the company boasts several best-selling drugs in each that combine to create huge revenue and profits for the company, which continue to grow quarter after quarter.

Gilead has used its financial power and research know how to build up an impressive pipeline that includes 36 ongoing clinical trials, with several of its new compounds in phase 3 or already pending regulatory approval. History has shown that the company is an expert at gaining approval and then quickly gaining reimbursement for its drugs, so I think the odds are favorable that its research efforts will pay off in the years ahead.

While we wait, Gilead is paying a dividend that yields around 1.7%, and the company has authorized a massive $15 billion share-repurchase program, which I think is a great use of capital considering its shares are trading hands for less than 11 times trailing earnings. That combination is simply too great of an opportunity for me to pass up, so I recently added a few more shares to my portfolio.