Seadrill Ltd (NYSE:SDRL) is in a very strange place given the current energy markets. The company has one of the best offshore drilling fleets in the industry, its backlog gives the company another year or two of operational cash flow, and it's not among the large number of drillers scrapping rigs at a rapid rate. Yet low oil prices have left the company out of favor with investors, and the stock seems to be priced as if the company is going out of business.

So, is this stock a great value, or is it throwing money away in the energy sector?

Time to let the market adjust
One of the keys for offshore drillers is to keep fleets busy during market downturns. This keeps cash coming in to pay off debts and cover expenses for out-of-work rigs, buying time for the market to recover.

As you can see below, Seadrill has well into 2016 before the company's cash flow starts to dry up. Seventy-five percent coverage for the floater fleet and over half of the jack-up fleet at work will likely be more than enough to cover interest expenses and other financial obligations through the end of next year.

Scrapping is under way
According to a presentation from Seadrill in early September, 15 jack-ups and 23 floater rigs had already been scrapped this year. With 51% of the global jack-up fleet and 28% of the floater fleet over 30 years old, there may be even more scrapping as we move into 2016.

Two competitors already feeling that pain are Transocean (NYSE:RIG) and Ensco (NYSE:VAL). In the first two quarters of the year, Transocean took a loss on impairments of $1.8 billion, and Ensco lost $704 million on impairments. They're writing down rigs to create a more modern fleet, but the impact of these writedowns will be a smaller fleet in the future. Where these

If there's an advantage Transocean and Ensco have over Seadrill it's a slightly lower debt load compared to revenue. This isn't a perfect ratio to look at, but it gives an idea of leverage based on how much revenue rigs can generate and isn't muddled by the writedowns I mentioned above. 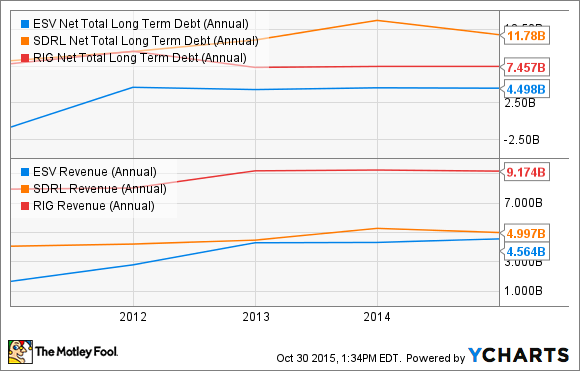 The advantage Seadrill has over these competitors is that it has a younger fleet to begin with, so it won't take the same hit as competitors do from older rigs, giving more upside during a recovery.

Positioned for recovery
If Seadrill is well positioned for an improving offshore drilling market and holds more upside than competitors, all investors need is higher oil prices. And therein lies the rub.

The longer oil prices stay low, the more investors seem to think oil will never recover. But as offshore drilling rigs come off their own contracts, they contribute to a slow decline in oil production globally, which will eventually mean a return of supply and-demand balance. In fact, U.S. oil production has already fallen 500,000 barrels per day since summer, which is about a quarter of what the market was oversupplied with globally at that time.

If oil prices recover by the end of 2016 or into early 2017, as I think the evidence indicates, you want to own companies that can survive until then intact, and who are well positioned when the recovery happens. I think that describes Seadrill's position in offshore drilling.

Of course, all of this is dependent on higher oil prices, and that's currently not something investors have much confidence in. But if oil prices recover by 2017, Seadrill should leave investors with big gains. If oil doesn't recover by then, this won't be the only company sinking in the energy space.