Please ensure Javascript is enabled for purposes of website accessibility
Log In Help Join The Motley Fool
Free Article Join Over 1 Million Premium Members And Get More In-Depth Stock Guidance and Research
By Travis Hoium - Oct 25, 2015 at 8:01AM

Oil markets are still oversupplied, and unless something shocks supply soon, it'll be the end of 2017 before they're finally back in balance.

The market seems to keep thinking that a recovery in oil prices is just around the corner, sending oil prices higher or lower based on bullish or bearish comments each day. But it'll likely be some time before oil prices move much higher.

The behemoth of an oil market was simply heading into an oversupplied situation too quickly to turn around in just over a year. So, energy stocks are in for more pain before reaching an eventual equilibrium.

There's a lot of oil out there
According to the U.S. Energy Information Administration, global oil markets were oversupplied by 1.8 million barrels per day in the third quarter of 2015. That's a result of a weaker-than-expected global economy, but really driven by the U.S. adding 2.5 million barrels per day of supply to the global market in the last two years alone. 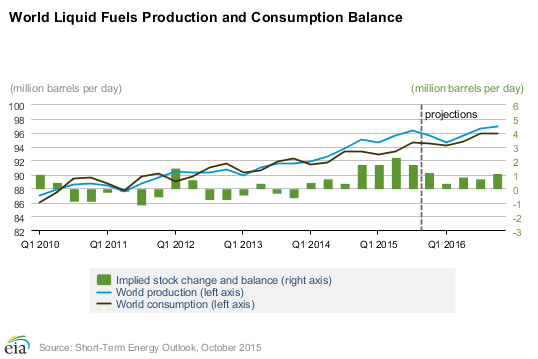 Of course, low oil prices have hurt U.S. oil producers' production and even led to more oil consumption, but energy markets are so big and complex that oil prices won't simply rise because oil producers slow drilling for new oil.

The long lag in oil supply
It may seem like oil prices would just balance at an equilibrium price somewhere around $70 to $80 per barrel, where some shale supply would go offline but not all companies or countries would have to go through financial hardship to stabilize supply and demand. But that's not the way the real world works.

Even high-cost producers in the U.S. would have hedged some of their oil production for the second half of 2014 and well into 2015, meaning that when prices dropped to near $50 per barrel they didn't suddenly shut down production. For example, Continental Resources (CLR 1.56%), one of the biggest shale producers in the U.S., had enough hedges last year to take a $433 million one-time gain on selling hedges in the third quarter. Of course, that has backfired a bit as oil has fallen since then, and the company was forced to report a loss of $131.6 million in the first half of the year.

And even though Continental Resources slashed capital spending from $4.8 billion to an expected $2.4 billion in 2015, it's expecting to increase production by 19% to 23%. It's taken a long time to cut back production and it will take years for today's low oil prices to result in lower production.

Budgets in the big oil business are also set on very long time horizons, not based on short-term price swings, making it even harder to adjust to prices. In 2013, ExxonMobil (XOM 1.98%) set a five-year capital budget plan of $190 billion, including multibillion-dollar projects like the Kearl oil sands or an LNG plant in Papua New Guinea. Cutting the capital budgets for 2015 by 12% to $34 billion may slow down some small projects, but the behemoth projects that drive most of the company's energy production are planned years ahead of time. That's why it takes so long to adjust to oil prices and why big oil has found it beneficial to diversify down the supply chain to refining or marketing gasoline, which benefits from low oil prices they experience upstream. Then ExxonMobil doesn't have to make knee-jerk reactions to the price of oil based on a few months or a year.

The long lag between when oil prices drop and when actual production drops means it could take years before supply and demand go from being 1.8 million barrels per day out of line to equilibrium.

2016 will bring progress and maybe higher prices
While production didn't fall as much as OPEC or energy investors may have hoped in 2015, it may in 2016. The EIA is already predicting that U.S. oil production will fall 400,000 barrels per day in 2016, and demand is expected to rise 1.4 million barrels per day globally. Given the current oversupply of 1.8 million barrels per day, that could bring markets into balance sometime next year if it weren't for Middle Eastern supply.

Iran's sanctions being lifted and Saudi Arabia's insistence on slowly increasing oil production could leave the market unbalanced by adding 1 million barrels or more of supply per day. That could push balance back to the end of 2016 or into 2017.

What's clear is that market forces are finally starting to work in the favor of energy investors. It may take another year for those forces to push oil prices higher, but when they do, a smaller number of well-positioned companies will remain. Long-term, oil isn't going anywhere, and the companies who can weather the storm now will be positioned to be big-time winners when oil prices rise again. By the look of it, that'll only be a matter of time.