Dividend stocks have proved their ability to outperform the market in the long term. Wealthy investors, or those with a relatively large portfolio in relationship to their financial goals, can generally assume more risk, which means they can take contrarian positions in undervalued companies with big dividend yields.

With this in mind, our contributors analyze three particularly strong investment ideas in high-yield dividend stocks.

Andres Cardenal (Las Vegas Sands): Las Vegas Sands (NYSE:LVS) is the leading casino operator in Macau, the only region on China where gambling is legal. The Chinese government has taken a series of measures to combat corruption and money laundering by VIP players via Macau casinos, and this is hurting tourism and gambling demand for different operators in the region.

Las Vegas Sands is feeling the impact from industry headwinds. Total revenue declined 18% year over year during the third quarter. However, gambling is still a very profitable business, and the company retains an adjusted EBITDA margin around 36% of revenue.

Because of generalized negativity on Macau casino stocks, Las Vegas Sands is trading at a big discount lately, and the stock is paying a generous dividend yield of 5.8% at current prices. It's worth noting that Las Vegas Sands has increased dividends by more than 30% annually since 2012, so the company has a solid track record of dividend growth over time.

Leaving short-term problems aside, Macau casinos should benefit substantially from the rise of the Chinese middle class in the coming decades, so current weakness in Las Vegas Sands stock seems to be presenting a buying opportunity for long-term investors.

Tim Green (IBM): Shares of IT giant International Business Machines (NYSE:IBM) have performed terribly over the past few years, but the falling stock price has turned IBM into a high-yield dividend stock for the first time in decades. Currently, IBM yields about 3.85% based on the most recent quarterly dividend, and while earnings are currently being pressured, the dividend has plenty of room to grow going forward. 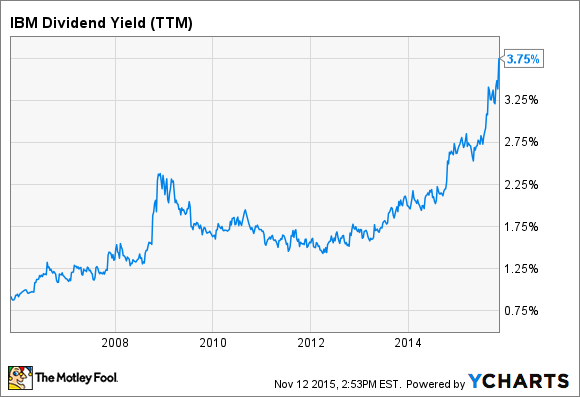 IBM has reported more than a dozen quarters in a row of revenue declines, and the past three quarters featured double-digit year-over-year revenue drops. This situation has created the narrative that IBM is falling apart, unable to adapt to a changing IT landscape. But the majority of these revenue declines have been due to foreign exchange rates and the divestiture of businesses. During the third quarter, while reported revenue fell 14% year over year, revenue fell by just 1% adjusting for these items. IBM is in the middle of transitioning its business, investing in high-growth areas, and the company is doing far better than the headline numbers suggest.

During the past 12 months, IBM generated $13.6 billion of free cash flow. Only $4.7 billion went toward dividends, putting the payout ratio based on these numbers at just 35%. IBM also spends billions on share buybacks, but the low payout ratio leaves IBM plenty of room to grow the dividend for years to come, even if earnings struggle to grow.

Double-digit annual dividend growth going forward isn't out of the question for IBM, and while investors will need to be patient as the company transitions its business, IBM may be one of the best dividend growth opportunities in all of tech.

Matt DiLallo: (Phillips 66 Partners): Phillips 66 Partners (NYSE:PSXP) might not be considered a high-yield stock just yet, given that its yield is currently south of 3%, but that will change over time. The company expects to grow its payout by a compound annual rate of 30% through 2018 because of a combination of organic growth projects in the pipeline and a steady stream of drop-down acquisition opportunities from its parent, Phillips 66 (NYSE:PSX). Because of this growth, it has the potential to make a wealthy investor even wealthier.

In addition to that growth, there are three other important factors that really make Phillips 66 Partners the perfect stock for a person that not only wants to grow one's wealth, but also do so by taking on less risk. First, it has an investment-grade credit rating from the major rating agencies to go along with a low leverage ratio compared with its peers. Second, all of its income is derived from fee-based assets that are signed up under long-term contract, which mutes much of the risk coming from commodity price volatility. Finally, its payout ratio is very conservative at more than 1.1, which provides security to the payout should it ever hit a rough patch.

Add it up, and we have a high-growth, high-yield stock with considerably less risk than most others of this type. It's that combination that makes it a great stock for both wealthy investors that are looking to grow their wealth and those just getting started with building a nest egg.