On the surface, it looks like International Business Machines (NYSE:IBM) is falling apart. Including its third-quarter results last month, the company has now reported revenue declines for 14 quarters in a row. Revenue slumped 14% year over year during the third quarter, and the company slashed its earnings guidance for the full year. IBM now expects its non-GAAP earnings to be $15.75 per share at most during 2015, well below its long-touted goal of $20 per share that was dropped last year. 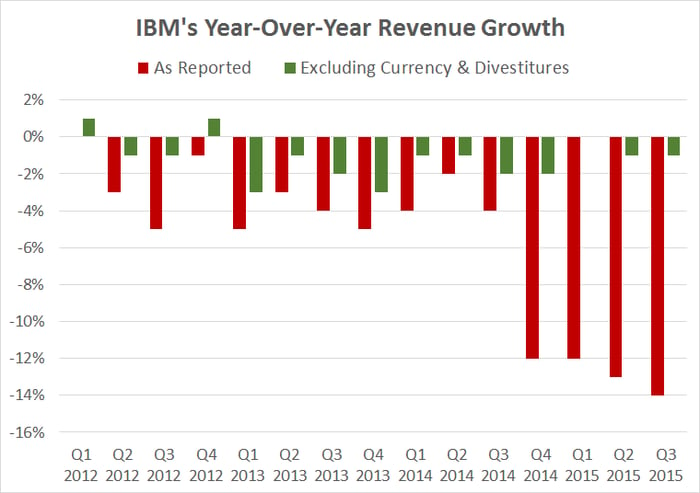 The red bars in the above graph represent IBM's reported revenue, while the green bars exclude the effects of both currency exchange rates and divestitures. On a reported basis, things started to get really bad toward the end of 2014, when revenue began to plunge by a double-digit percentage each quarter. The situation has gotten worse each quarter, with the third quarter of this year seeing the largest drop in revenue so far.

The green bars tell a very different story. IBM has sold off a handful of businesses over the past few years, and the green bars exclude the impact of these divestitures. Last year, IBM sold its x86 server business to Lenovo, leaving the company's hardware segment with mainframes and Power servers, both of which use processors of IBM's design. IBM also got rid of its semiconductor manufacturing business, paying GlobalFoundries $1.5 billion to take the struggling unit off its hands. IBM continues to invest in semiconductor research, and the company now outsources the actual manufacture of semiconductors to GlobalFoundries.

The green bars also exclude the effects of currency. Over the past year, the U.S. dollar has strengthened, meaning that revenue earned in other countries translates into fewer U.S. dollars. IBM is a global business, and currency has had a major negative effect on its reported revenue. Here, for example, is how the Euro to U.S. Dollar exchange rate has evolved over the past five years: 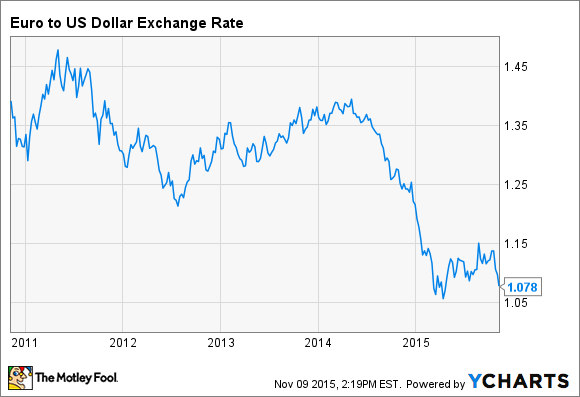 Toward the end of 2014, a sharp drop in the exchange rate led to big year-over-year declines. This is the main reason IBM's revenue began to tank beginning in the third quarter of 2014. On an adjusted basis, IBM's revenue situation has actually improved so far this year compared to 2013 and 2014, with smaller year-over-year declines. During the third quarter of this year, revenue from the Europe/Middle East/Africa region, adjusted for currency and divestitures, actually grew by 1%.

The red bars appear to show a company that is unraveling at the seams, but the green bars represent a more accurate picture of how IBM is actually performing. Currency remains an issue, and as the above exchange rate chart shows, revenue over the next few quarters will continue to be negatively affected by exchange rates. But currency is not something IBM can control, and these large revenue declines -- and the associated profit declines -- have almost nothing to do with the performance of IBM's business.

IBM's revenue is still declining on an adjusted basis, but the company is going through a transformation, exiting unattractive businesses and investing in growth areas like analytics and cloud. The company's strategy involves moving to higher-value businesses, focusing on the areas of IT that promise superior returns on investment.

No, IBM Is Not Falling Apart @themotleyfool #stocks $IBM Next Article
Current