It remains to be seen if the 300% gain that bitcoin logged in 2020 will last. Holders of the cryptocurrency have obviously enjoyed its rise, but no one's yet pinpointed exactly what sparked so much bullishness.

There is one related certainty, however. While it was obscured by the pandemic and overshadowed by bitcoin's surge, blockchain technology -- which underlies all cryptocurrencies -- had something of a moment last year. With blockchains being put to use in a growing number of new ways, expect that this highly versatile technology will have a breakout year in 2021.

Usage of blockchain is ramping up in a big way

The two terms are often used interchangeably, but to do so is an error. Cryptocurrencies such as bitcoin are like money in the sense they can be used to buy goods and services, or transfer value, but they're unlike money in that they're not managed or issued by any governmental agency. Blockchain, by contrast, is the underlying distributed ledger technology that allows those cryptocurrencies to work as intended, and that can be applied to a myriad of other applications. It can be used to facilitate secure transactions involving actual currency, manage supply chains, protect intellectual property like videos and music, ensure voting and ballot integrity, and more. 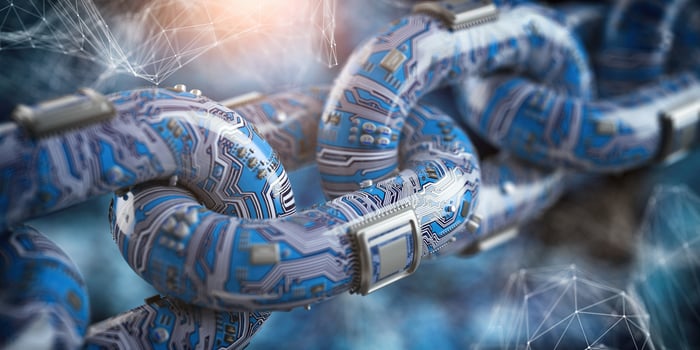 When the technology was in its infancy, relatively few prospective users saw its potential. Many have come around to it, though. Several marketable uses for blockchain materialized in 2020, turning more of the right heads in the process.

One of these noteworthy cases was the implementation of digital currency as a substitute for fiat -- or government-issued -- physical currency. The Bahamas launched a cryptocurrency pegged to the value of its dollar in October, Although the rollout was limited in scope, the small West Indies nation hasn't run into any major problems with its Sand Dollar yet. China is also forging ahead with plans for a cryptocurrency version of the yuan, although the pilot that it launched in April remains limited to just four cities participating in what should still only be considered an experiment. An alternative to a physical euro is also being considered by the European Central Bank, per an announcement made in October.

But beyond digital currencies, blockchain is also perfectly suited for use in monitoring logistics networks. Technology stalwart IBM (NYSE:IBM) and shipping giant Maersk (OTC:AMKBF) jointly created a platform called TradeLens back in 2018 to more effectively manage supply chains and secure the underlying contracts for deliveries. More and more players have started to participate in that network. Rail giant Canadian Pacific signed on in October, and the international bank Standard Chartered did the same in March. The Port of Los Angeles came on board in September, following terminal port operator DP World's decision to join in May.

It doesn't take much reading between the lines to realize blockchain-driven management is becoming the de facto standard for all players within the shopping and logistics industry.

Blockchain is even finding a home within the healthcare arena. French pharmaceutical company Transgene combined artificial intelligence and patients' genetic data managed with blockchain technologies to create its myvac platform, which is being used to develop personalized cancer immunotherapies. These tailor-made treatments could not be produced as quickly or accurately (if they could be made at all) without the use of Hypertrust's X-Chain blockchain solution.

Given Transgene's success with the technology, look for other pharma names to follow suit.

So which names will shape up as the best blockchain stocks of 2021 and beyond? IBM is arguably doing the most to make blockchain practical for use in applications beyond cryptocurrencies, but the beleaguered company's other businesses make it a tough name to own. In 2019 -- before COVID-19 began to crimp its business -- revenues from IBM's services and systems divisions were shrinking faster than more modern lines like cloud computing and AI were growing. The company would need to develop an incredible blockchain business in a hurry to make it a blockchain stock worth betting on.

That leaves more focused companies like Riot Blockchain (NASDAQ:RIOT) and Oracle (NYSE:ORCL) as the top contenders. The former is still mostly a bitcoin play. The latter has come up with some impressive all-purpose solutions that would appeal to businesses aiming to improve efficiency and reduce waste. Oracle is also one of the companies most investors still don't recognize as a major blockchain name.

Whatever investments you might choose to increase your exposure to the blockchain revolution in 2021, be aware of this: Fortune Business Insights estimates that the global blockchain market will grow at a compound annual rate of 56% between now and 2027 when it's expected to be worth $69 billion per year. That kind of growth will create a lot of opportunities even for the weaker players in the space.