Matthew DiLallo, Dan Caplinger, and Jason Hall
(TMFmd19)
Author Bio
Matthew is a senior energy and materials specialist with The Motley Fool. He graduated from Liberty University with a degree in Biblical Studies and a Masters of Business Administration. You can follow him on Twitter for the latest news and analysis of the energy and materials industries: Follow @matthewdilallo

The price of oil has been weak all year, largely because producers have continued to pump crude at maximum capacity. However, the industry's ability to continue pumping at peak levels is expected to be challenged in 2016 due to underinvestment in new supplies. Thus, there's an expectation that worldwide supplies could decline. In fact, U.S. oil production is already well off its peak from earlier in the year, and is expected to continue to slide in 2016.

At some point, this should rebalance the oil market, leading to a stabilization and subsequent rebound in oil prices. When that happens, it should take oil stocks up with it.

Here are three beaten-down energy stocks that look poised to rally should crude rebound in 2016.

Dan Caplinger: Falling oil prices have hurt the future prospects of companies throughout the sector, but they've had an immediate and detrimental impact on royalty trusts. BP Prudhoe Bay Royalty Trust (NYSE:BPT) has taken a hard hit, losing more than half of its value since January as plunging crude has slashed the amount the trust has paid in distributions.

Yet investors often make the mistake of pricing royalty trusts with backward-looking assumptions about future income. Even at its current depressed levels, BP Prudhoe Bay pays a yield of around 8%, and any rebound in oil prices would lift those distributions substantially. As recently as mid-2014, the trust paid $3 per share in quarterly payouts.

Long-term investors need to understand that BP Prudhoe Bay has a limited timespan for its existence, and so some of its distributions effectively represent a return of capital rather than true income. Nevertheless, for those with a short-term focus, a bounce in energy prices would inevitably lead to greater proceeds from the trust's royalty interests. That in turn would send BP Prudhoe Bay shares skyward and reward investors with larger payouts. That's a combination that might well be worth taking the risk for those who are bullish on the prospects of the energy industry.

Matt DiLallo: Oil-field equipment maker National Oilwell Varco (NYSE:NOV) is down 43% since the start of the year. Some of that slide is justified given that oil prices have been weak all year, which is muting National Oilwell Varco's sales and profitability. In fact, its third-quarter sales were down 41% year over year while its adjusted net income fell from $1.66 per share in the third quarter of last year to just $0.61 per share last quarter.

Unfortunately, National Oilwell Varco sees a bit more downside ahead, because the oil market hasn't quite bottomed just yet. CEO Clay Williams noted in the third-quarter earnings release that he sees its weakness continuing at least through the fourth quarter and that the company has limited visibility into the timing of the recovery.

Jason Hall: Chesapeake Energy (OTC:CHKA.Q) is as beaten-down an energy stock as you'll find, and it's not an undeserving beat-down, either. The company is dealing with the same challenges as the rest of the industry with low commodity prices, but its problems are compounded. Chesapeake has a huge pile of debt and unfavorable contracts with pipeline operators it uses to transport the oil and natural gas it produces.

Add it all up, and Chesapeake Energy is burning through its capital reserves at a fast rate: 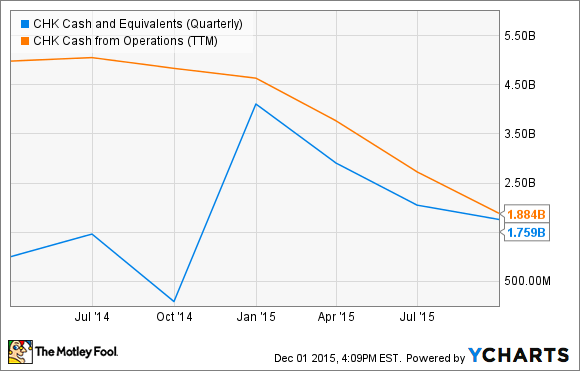 It potentially gets worse. Chesapeake's available credit -- an important source of back-up liquidity -- keeps getting cut with each quarter of the downturn. In other words, things are bad at Chesapeake.

But that doesn't mean they are dire, at least not yet. The company has worked with Williams Companies, one of its main pipeline vendors, to rework its agreements, and this should lead to Chesapeake realizing higher selling prices for natural gas.

And, frankly, natural gas is more important to the company than oil at this stage, making up well over two-thirds of its production.

Bottom line? If Chesapeake can continue to rein in its costs and operating efficiency, that will help. If natural gas prices rebound from the current lows, Chesapeake's cash flows would surge, and the stock would skyrocket.

Natural gas prices are as low as they've been in a decade. That's no guarantee they'll rebound, but if they do, Chesapeake will be a huge winner.