The suit seller's acquisition of Jos. A. Bank has not gone well, with the struggling brand dragging down the entire company.

What: Shares of apparel retailer Men's Wearhouse (TLRD) collapsed in 2015, falling 66.7%, according to S&P Capital IQ data. The company's acquisition of Jos. A. Bank, which closed in 2014, has so far been a disaster, with comparable-store sales at Jos. A. Bank stores tumbling during the second half of the year. 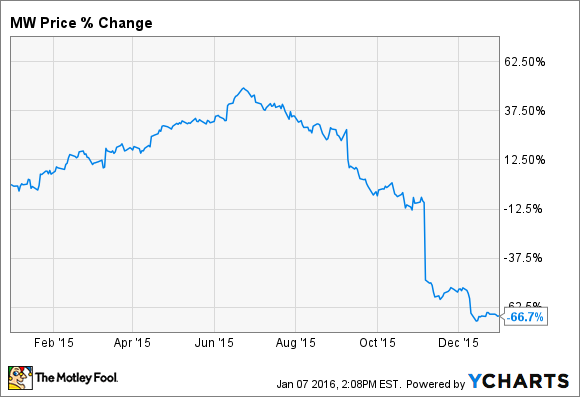 So what: Jos. A. Bank became dependent on heavy promotions prior to being acquired, particularly buy-one-get-three-free promotional events. Men's Wearhouse began to transition away from these in 2015, leading to a steep decline in comparable-store sales. In September, the company reported its second-quarter results, and while the Men's Wearhouse brand performed well, comparable-store sales at Jos. A. Bank tumbled 9.4%.

In November, the company announced preliminary results for the third quarter. Jos. A. Bank's comparable-store sales were expected to decline by 14.6%, well below the company's prior expectations. This number was confirmed when the company reported its full third-quarter results in December. Men's Wearhouse also announced that through the first week of December, quarter-to-date Jos. A. Bank comps were down a whopping 35.1% year over year. Men's Wearhouse reported a net loss of $27.2 million during the third quarter, compared to net income of $6.8 million during the prior-year period.

Now what: The move to eliminate heavy promotions at Jos. A. Bank is likely the right thing to do in the long run, and it should help boost gross margins considerably. But Jos. A. Bank customers expecting these sales have abandoned the brand in droves, and Men's Wearhouse will need to rebuild the brand from scratch, a process that could take years.

The good news is that the Men's Wearhouse brand itself is firing on all cylinders. During the third quarter, comparable-store sales at the company's namesake stores rose by 5.3%. Some of this growth is likely due to former Jos. A. Bank customers switching to Men's Wearhouse, but it's clear from the company's results that Jos. A. Bank is dragging down the entire company.

How long it takes for Men's Wearhouse to fix the struggling brand remains to be seen, but the stock could remain depressed until meaningful progress is made.