The menswear retailer is struggling with changing dress codes, and it's running out of time to adapt.

Tailored Brands (TLRD) reported third-quarter results on Wednesday that demonstrated the continuing struggles of the men's apparel company. The owner of the Men's Wearhouse and JoS. A. Bank chains is trapped in a world with multiple challenges. For one, its traditional brick-and-mortar network of stores faces tougher times. Second, the traditional office dress code that used to apply in American business is simply becoming lax.

I wouldn't be caught dead in an important meeting without a suit and tie, but times are changing and many others may disagree. Even if you do wear suits to important business events, the traditional office day doesn't require as much of the decorum.

When looking at the third quarter, it's important to note that earnings from continuing operations were actually $27.78 million, or $0.56 per diluted share, while Tailored Brands incurred a loss of $2.35 per diluted share stemming from discontinued operations.

Adjusted net earnings were $26.3 million, or $0.53 per diluted share. Even then, earnings are still way down from last year's adjusted $0.95 per share.

Total sales, as well as comps, experienced declines. Men's Wearhouse, the largest piece of the business, had $438.1 million in revenue, a decline of 3.7%, while comps fell 2.8%. JoS. A. Bank revenue fell 1%, while comps actually experienced a rare gain of 0.5%. K&G and Moores, the smallest pieces of the business, had comps declines of 1.5% and 5.5% respectively. In all, Tailored Brands' comps fell 2.2%. 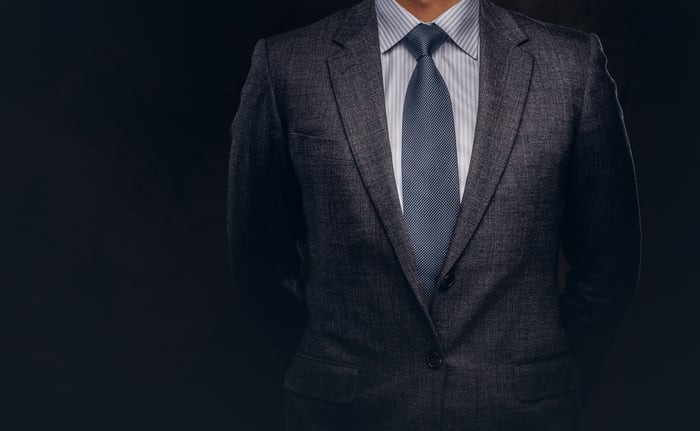 The tough trends, and attempts to divest

The decision to purchase JoS. A. Bank for $1.8 billion a few years back is seeming more and more like a big mistake.

With Men's Wearhouse and JoS. A. Bank both suffering sales declines, that $1.8 billion would be very useful right now. Instead, the balance sheet carries long-term debt of $1.1 billion, though the company has paid down $56.2 million since Q3 2018.

It's trying to change course a bit by offering things like jeans and more business-casual attire. But this segment is pretty well saturated by a plethora of brands, so it'll be tough. Tailored Brands is far from a top stock and faces multiple challenges that all need to be addressed now. Based on its balance sheet, the time to fix those problems is getting shorter and shorter.