After a monstrous 10-year run, Regeneron Pharmaceuticals shares are trading for more than $400 each. Is that price a bargain or a rip-off?

With a current market cap hovering around $45 billion, Regeneron Pharmaceuticals (NASDAQ: REGN) has become a biotech giant. This tremendous success can be traced to the huge growth of Eylea, its treatment for wet age-related macular degeneration and diabetic macular edema. The blockbuster medication has allowed the company to grow its profits by an astounding 81% compounded rate over the past five years. That torrid growth rate has propelled shares higher over that time period, leaving the returns of the S&P 500 in the dust. 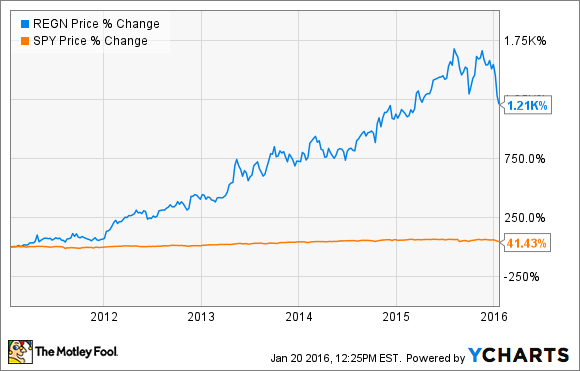 But with shares now trading for more than $400, have the company's shares gotten ahead of themselves? Let's run the stock through a few valuation metrics to see if we can ascertain an answer.

However, since no stock exists in a vacuum, it can be helpful to have a few other companies of similar size to which to compare it. Alexion Pharmaceuticals (NASDAQ: ALXN) and Vertex Pharmaceuticals (NASDAQ: VRTX) look like solid choices, as both of them are also fast-growing, large-cap biotechs. Alexion Pharmaceuticals is currently launching two new orphan drugs for sale -- Kanuma and Strensiq -- that each hold billion dollar peak sales potential. Likewise, Vertex Pharmaceuticals newly launched cystic fibrosis drug Orkambi is off to a fast start, and when combined with the recent label expansions wins for Kalydeco, the company's sales seem poised to rise significantly.

Here are all three companies' trailing P/E ratios at the moment:

Believe it or not, when compared to its peer group, Regeneron Pharmaceuticals' trailing P/E ratio of 92 is actually the cheapest of the bunch. That could indicate that its stock is a relative bargain.

Forward P/E ratio
Before you simply write off all three of these stocks as too expensive to even consider for investment, it can be useful to look at the companies forward P/E ratio as well. The forward P/E ratio simply substitutes the estimated earnings per share over the next year in the denominator of the equation.

After we make that simple substitution, all three start to look much more reasonably priced:

The huge drop in the P/E ratio when using the forward estimates hints at just how much growth investors are expecting from each of these companies over the coming year. Vertex Pharmaceuticals, in particular, swings from being unprofitable to being potentially reasonably valued, which shows how useful the forward P/E ratio can be.

Based on this metric, Regeneron Pharmaceuticals' stock looks a bit pricey, but I have a much harder time calling the shares insanely overvalued.

Future growth
As mentioned above, Regeneron's best-selling eye disease drug Eylea has been growing like gangbusters over the past few years. 2016 is shaping up to be another great year for the medication as the company successfully grabbed a handful of label expansions for Eylea that should keep its growth rate humming.

Beyond Eylea, Regeneron and its collaborator Sanofi recently launched a new cholesterol-busting drug called Praluent, which looks to hold blockbuster potential. Regeneron also boasts an exciting pipeline with two drugs in late-stage clinical trials that could generate more than $1 billion in annual sales each. If both manage to win regulatory approval in the next few years, then the company's turbocharged growth rate could continue into the foreseeable future.

In total, analysts expect Regeneron to grow its profits at a 21% compounded growth rate over the next five years. While that is a significant decline from the 81% growth rate of the past five years, it's still a very fast rate for a company of Regeneron's size. If the company is successful in meeting or exceeding those lofty expectations, the odds are good that the market will continue to pay a premium for its shares. That could hint that paying a premium for the company's share is warranted.

Bargain or rip-off?
Valuing fast-growing companies like Regeneron Pharmaceuticals is a notoriously difficult task, and although its various P/E ratios might indicate that its shares are not a screaming bargain at the moment, I have a hard time calling them expensive. It's also important to remember that the company's current products are still in fast-growth mode, it has two exciting products in its pipeline, and it has a strong history of outperforming its expectations. Add it all up and I'd argue that its shares are far more likely to be a bargain than a rip-off right now.

Brian Feroldi has no position in any stocks mentioned. The Motley Fool recommends Vertex Pharmaceuticals. Try any of our Foolish newsletter services free for 30 days. We Fools may not all hold the same opinions, but we all believe that considering a diverse range of insights makes us better investors. The Motley Fool has a disclosure policy.