The FDA has given the nod to the sale of Praluent, the first of a new class of cholesterol lowering medications, and a blockbuster opportunity for the company's.

Healthcare giants Regeneron Pharmaceuticals (REGN 0.54%) and Sanofi SA (ADR) (SNY 1.02%) treated their investors to great news over the weekend as the companies announced that they won FDA approval of their highly anticipated cholesterol-lowering medication Praluent.

Solving a big problem
Praluent represents the first in a new, potentially game changing, class of cholesterol-lowering medications to gain FDA approval. This new class of drugs are known as proprotein convertase subtilisin/kexin type 9, or PCSK9, inhibitors and offer a new treatment option for the millions of patients nationwide who have trouble controlling their cholesterol levels.

The Center for Disease Control estimates that more than 73 million american have high low-density lipoprotein, or LDL, cholesterol levels, which is nearly 1 out of every 3 Americans. People with high LDL cholesterol levels, also known as the "bad" cholesterol, face twice the risk for heart disease as those with more normal numbers.

For years statins like Pfizer's blockbuster Lipitor have been the gold standard treatment option for patients with high cholesterol levels. Statins help patients better control their LDL cholesterol levels by blocking a substance in the body that controls cholesterol production. However, for millions of Americans treatment with statins alone simply hasn't been enough to get to their goal.

In clinical trials, patients who added Praluent the their current treatment regimen reduced their LDL cholesterol by up to 58% versus placebo, a massive improvement, and showed relatively minimal side effects.

Praluent has only been approved as a treatment option for patients with heterozygous familial hypercholesterolemia or clinical atherosclerotic cardiovascular disease that are currently using the maximum tolerated statin therapy to control their cholesterol levels, but are still struggling. The company estimates that between 8 million and 10 million Americans currently fit this description.

Praluent is injected via a single-dose pre-filled pen or syringe that patients self-administer every two weeks, and should be available for sale as early as this week.

A pricey solution
There have already been grumblings about the high price tag of Praluent, which is currently set at $14,600 per year. However, the actual costs to patients, payers and health systems are anticipated to be much lower, as that pricing does not include discounts or rebates that are common in the industry. Payers are likely to restrict access to only a small group of their patients that have already exhausted their use of statins, as generic forms of statins cost a tiny fraction of Praluent's list price. Controlling costs is likely to be a top priority for insurers, as patients will likely need to use drugs like Praluent for decades to come since controlling cholesterol levels is a lifelong problem.

While the big price tag is likely to get a lot of headlines, its important to remember that cardiovascular disease is the number one cause of death in the U.S., and the estimated cost of treating the disease is $315 billion annually. If PCSK9 drugs like Praluent can put even a small dent in that number, then even with the high price tag the drug could prove to be a very cost-effective treatment.

More good news
The good news wasn't just limited to the U.S. either, as the company also announced that the European Medicine Agency's Committee for Medicinal Products for Human Use has adopted a positive opinion for the marketing authorization of Praluent, recommending its approval for use in certain adult patients with hypercholesterolemia.

This news is most welcome for Regeneron and Sanofi investors, as just last week competitor Amgen (AMGN 0.79%) announced that it received approval to market its own PCSK9 inhibitor Repatha in Europe, beating Regeneron and Sanofi to the punch. Amgen's lead won't exist for too long, as the companies should hear of an official approval decision for Praluent in Europe by September of this year.

Further down the road Pfizer may become a competitor as well, as is it currently working on its own PCSK9 inhibitor, but the company is further behind and likely won't hit the market until 2017.

Blockbuster Potential
Peak sales estimates for PCSK9 inhibitors as a group look to be huge, and could eventually reach as much as $10 billion. Even if Regeneron and Sanofi have to split that market with Amgen, and down the road a bit further with Pfizer, it still appears to hold multi-billion dollar potential.

This number looks especially enticing for Regeneron investors, as in 2014 the company rang up total sales of only $2.8 billion. Praluent is poised to have a big impact on Regeneron's financial statements, so it makes sense that investors have been bidding up the stock more than 75% over the past year. 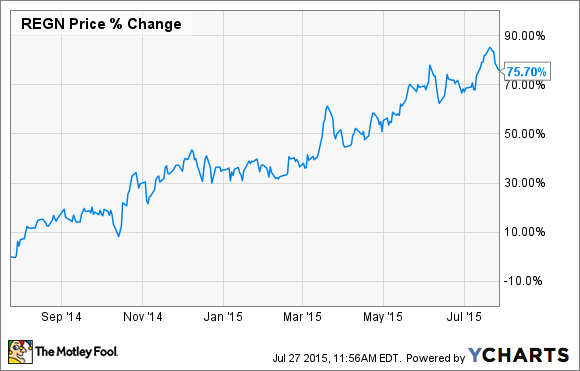 Is Regeneron a buy?
Regeneron shares are currently trading for around 40 times 2016 earnings, which certainly makes them look quite pricey. However, now that Praluent has officially cleared U.S. regulatory hurdles and appears to have a good chance to doing the same in Europe, I understand why the market is so excited about the company's near term future. With a lot of good news priced into the stock, I'm personally going to keep Regeneron on my watch list for now, but would be more than happy to add it to my portfolio if current sales projections for Praluent prove to be too conservative, or it the market as a whole were to take a fall.