Markets jumped after receiving good news on the housing market. 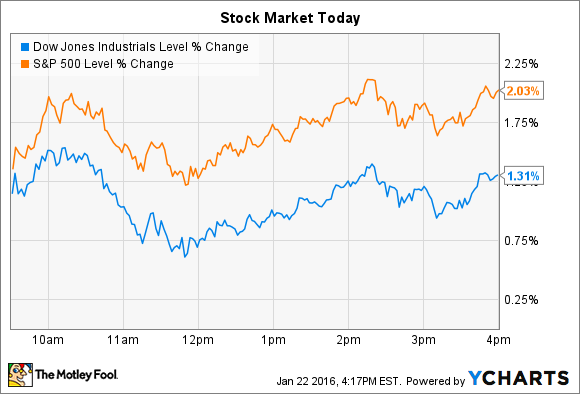 The rebounds left both indexes at roughly 7% below where they started 2016.

The big economic news of the day came from the housing market, which showed renewed strength in December. Existing home sales spiked higher by 15% last month, according to the National Association of Realtors. It was the largest monthly increase ever recorded, but the hike was affected by new regulations that had held November's figures temporarily lower. Still, sales for the full year rose at an impressive 8% rate .

American Express adjusts to a new normal
American Express lost 12% after the credit card giant announced results that included a weak outlook for 2016 and plans for a billion-dollar restructuring. The headline numbers beat expectations, with revenue falling 8% to $8.4 billion as adjusted EPS tanked by 36% to hit $0.89 per share.

Profits and sales were significantly affected by temporary factors, though. Revenue actually rose by 4%, after adjusting for exchange rate swings, and adjusted EPS fell by 12%.

Yet management wasn't happy with fiscal 2015's results, and they warned of broad, negative trends that convinced the team that a huge cost-cutting focus was needed. "Our 2015 results and outlook reflect the reset in co-brand economics, pressures on merchant fees, the evolving regulatory environment and intense competition that have been reshaping the payments industry," CEO Kenneth Chenault said in a press release. "Against that backdrop, and the fact that revenue growth has not accelerated as we anticipated, we are moving aggressively to streamline the company," he explained .

American Express now sees earnings of $5.55 per share in 2016, which implies another annual profit decline absent its one-time gain from selling the Costco portfolio. It won't be until 2017, management believes, that it can return to the $5.60 per share profit level it last saw in 2014.

General Electric's volatile sales environment
GE shares fell by as much as 3% today before recovering to end the day down 2%. This morning the industrial giant posted fourth-quarter earnings results that described its sales environment as "volatile," and held down by slow growth.

Consolidated revenue ticked higher by 1%, to $33.9 billion as operating earnings fell 21% to $0.31 per share. Yet profitability improved and the company soundly beat its goal of shrinking its consumer capital business by at least $100 billion. "GE executed well in a slow-growth environment," CEO Jeff Immelt said in a press release .

GE affirmed its 2016 outlook that calls for between 2% and 4% organic growth, producing $1.50 per share of profits at the midpoint of guidance, compared to $1.31 per share in the year that just closed. The recent economic slowdown is on management's mind. "We recognize that the first few weeks of 2016 have been especially volatile," Immelt said. But GE's steady growth pace -- both with regard to sales and to backlog -- gave management confidence to leave its 2016 forecast in place.