Please ensure Javascript is enabled for purposes of website accessibility
Log In Help Join The Motley Fool
Free Article Join Over 1 Million Premium Members And Get More In-Depth Stock Guidance and Research
By Matthew DiLallo - Jan 26, 2016 at 11:45AM

Despite holding up well so far in 2016, there could be more downside ahead for this oil stock.

Overall, Occidental Petroleum (OXY -0.85%) stock has performed relatively well in 2016. While shares have declined, they've roughly matched the market's return, which is surprising considering how far crude has fallen to start the year: 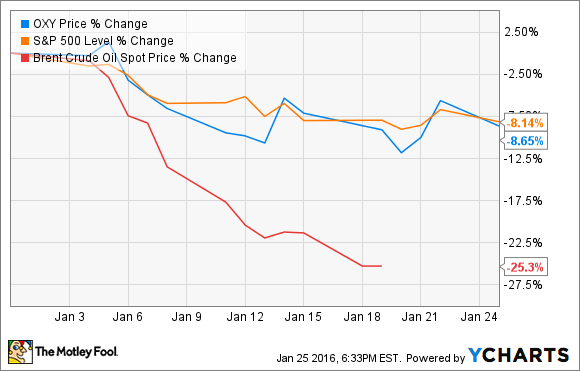 That said, the stock could have farther to fall, especially if these three catalysts happen.

1. Oil prices keep falling
If the price of oil continues to fall, it will take Occidental Petroleum's stock down with it. That's due to the fact that the company needs a higher oil price to not only balance its cash flow with its capex, but also to earn an economic return on new oil projects.

At its current spending pace, Occidental Petroleum needs the price of oil to be around $60 a barrel to balance capex with cash flow. Suffice it to say, with oil prices nearly 50% below that level, the company is being forced to use its balance sheet to bridge the gap. In addition to that, the company needs higher oil prices in order to earn an economic drilling return in the Permian Basin, which is its primary growth driver. However, only 15% of its current drilling inventory is economic at an oil price in the $40 to $50 range, with that percentage falling along with the oil price. In other words, if oil keeps falling, not only will the company's drilling options dwindle, but so would its projected drilling returns on any wells it does drill.

2. A dividend reduction
With Occidental Petroleum outspending its cash flow by a growing margin, it has put the long-term sustainability of the company's dividend in question. That said, the company does have more than enough cash on its balance sheet to fund that gap for at least a year, if not more, and additional sources of cash to tap in order to maintain the dividend for a while.

Still, despite that cushion the company could decide to reduce or suspend its payout until conditions improve. That's something we've seen a growing number of oil producers do, with Marathon Oil (MRO 1.56%) being a recent example. In Marathon's case, it chose to significantly reduce its dividend in order to save it $425 million per year, which will be used to bolster its balance sheet.

3. Analysts throw in the towel
With the price of oil continuing to plunge, a number of analysts are throwing in the towel on the sector and downgrading everything. That said, thanks to its strong balance sheet and diverse sources of cash flow, Occidental Petroleum is a favorite of analysts. In fact, Wells Fargo recently retained its outperform rating on both Occidental Petroleum and Marathon Oil because of their global diversification, which puts each of them in a better position to ride out the storm.

That said, others disagree, with Jefferies recently downgrading Occidental from buy to hold, because it's projected to have a $2 billion cash flow deficit in 2016. That deficit could force the company to reduce spending, which would lower its growth rate. Other currently bullish analyst could likewise throw in the towel, with a rash of downgrades likely putting a lot of downward pressure on the company's stock price.

Investor takeaway
While Occidental Petroleum's stock has held up rather well through the downturn, that might not last if oil prices continue to fall. Oil, however, is only one of the risks facing the company; a potential dividend reduction or a rash of analyst downgrades could also drive the stock lower. That's why investors need to be mindful not to over-allocate to the company, because the stock price could keep going lower.