Please ensure Javascript is enabled for purposes of website accessibility
Log In Help Join The Motley Fool
Free Article Join Over 1 Million Premium Members And Get More In-Depth Stock Guidance and Research
By Matthew DiLallo - Jan 21, 2016 at 7:21AM

There is a case to be made for a raise or a reduction. 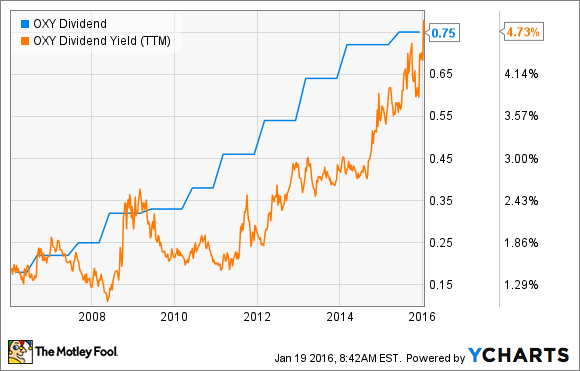 However, times are so tough right now that it's possible that the company ends its streak of more than a decade of annual dividend increases. In fact, there's a case to be made that the company might need to reduce its dividend because the current oil price is well below the company's cash flow breakeven point. Here's a closer look at both the bull and the bear case for Occidental Petroleum's dividend in 2016.

The bear case
The case against Occidental Petroleum's raising its dividend, and potentially reducing it, is very simple. The current oil price of roughly $30 per barrel is 50% below the company's current cash flow breakeven point: 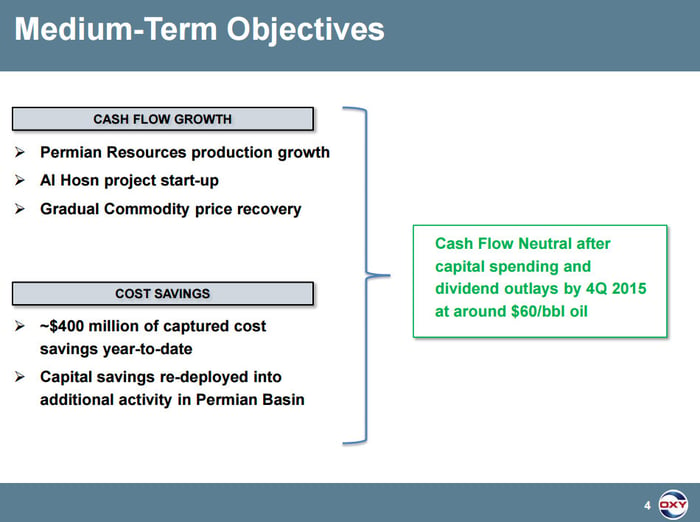 That means the company is using its balance sheet to fund a significant portion of its capex and dividend outlays, which is unsustainable over the long term.

It's far from the only company that's using its balance sheet to support its operations during the downturn. However, it's a practice that has credit rating agency Moody's concerned, which is why it put 29 U.S. oil companies on review for a potential credit rating downgrade, including Occidental Petroleum and ConocoPhillips (COP 2.38%). I bring ConocoPhillips up because it shares a lot of similarities with Occidental, including the fact that both share an "A2" credit rating and because these companies need oil in the $50 to $60 range to be cash flow breakeven. Given that neither wants to see its credit or balance sheet deteriorate, it's possible that both might have to bite the bullet and reduce dividend payouts to prevent a steep credit rating downgrade. ConocoPhillips has said protecting its dividend is its top priority, but if it did cut its payout, then Occidental Petroleum would have no reason not to follow suit.

The bull case
Still, Occidental Petroleum ended 2015 with $4.4 billion in cash on its balance sheet, which is more than a year's worth of capex spending at its current run rate. In addition, the company continues to close non-core asset sales and could divest additional assets, since it plans to minimize its involvement in the Middle East and North Africa. In fact, according to a Reuters report, the company has already sought permission to sell its 29.69% stake in the Zubair oil field in Iraq and is interested in selling additional non-core assets in the Middle East. These asset sales could enable the company to maintain its dividend without hurting its balance sheet. In fact, asset sales are the primary bridge ConocoPhillips is using to fund its own cash flow gap, with it currently working to close $2.3 billion in divestitures.

On top of asset sales, Occidental Petroleum was recently awarded $980 million to settle a lawsuit after Ecuador seized the company's Block 15 oil field in 2006. It has already received $200 million of that settlement, with the rest to be paid out over the next few months.

With the cash already on its balance sheet, plus the cash inflows yet to come from asset sales and the settlement, it certainly provides the company with a nice cash cushion to at least maintain its dividend. However, the company's own history suggests that it will grow its dividend even when times are tough, which is evidenced by the $0.03-per-share increase last year, as well as the $0.01-per-share boost during the financial crisis. Those increases, while minor compared with prior years, shows that the company values its dividend. In a lot of ways, it's following in the footsteps of ConocoPhillips, which boosted its dividend by $0.01 per share last year to send its shareholders a message that the dividend was its top priority. Given Occidental's history, it would seem that it, likewise, puts a priority on its dividend, suggesting that an increase of at least $0.01 per share is possible in 2016.

Investor takeaway
With a boatload of cash on its balance sheet and the more cash coming in the door, it's unlikely that Occidental Petroleum will reduce its dividend anytime soon. Instead, it's far more likely to increase it ever so slightly in 2016 just to show its support for the payout. But the company really needs to see the oil price rebound into the $50 to $60 range for the payout to be sustainable over the long term.