Please ensure Javascript is enabled for purposes of website accessibility
Log In Help Join The Motley Fool
Free Article Join Over 1 Million Premium Members And Get More In-Depth Stock Guidance and Research
By Daniel Miller - Jan 29, 2016 at 7:20AM

Heading into Polaris Industries' (PII 0.40%) fourth-quarter earnings presentation, investors likely believed the downside was already priced into the stock – after all, the company's stock dropped 10% mid-December when management reduced guidance. That wasn't the case and Polaris' stock dropped another 8% during its fourth-quarter results and gloomy outlook for the first half of 2016. Let's take a look at three key takeaways from Polaris' less than enjoyable fourth-quarter.

ORV/Snowmobile
Considering that off road vehicles (ORV) and snowmobile sales generate a massive chunk of the company's overall revenue, let's dig into that segment first. 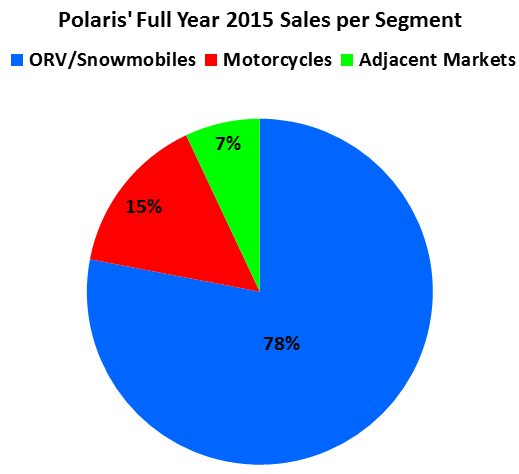 Polaris ORV sales plunged 20% to $590 million during the fourth-quarter, compared to the prior year, which pulled the full-year ORV sales down 2%. Polaris couldn't escape the clutches of the reeling oil industry as its retail sales in oil regions were down 10% last year, and upper-teens % during the fourth-quarter. That was much worse than Polaris' ORV retail sales in its SxS lineup which was down mid-single digits, and its ATV and ACE products which posted low-single digit percentage declines.

However, if there's a silver lining for investors it's that despite the rough fourth-quarter Polaris managed to grow retail sales for 2015 as a whole and even added market share to its No. 1 market position.

It's a similar sad song and dance with Polaris' snowmobile vehicle sales which posted a 25% sales decline to $103 million during the fourth-quarter, compared to the prior year. It's pretty simple to understand this decline as it's been a warm winter at a time when a snowstorm before Christmas is a rare development. Again, despite the very poor market – the North American industry season-to-date retail was down more than 20% -- Polaris managed to gain N.A. retail share by posting a retail sales decline in the mid-teens %. According to management, that enabled Polaris to gain more market share than any other competitor in the industry.

Lastly, on the bright side, management did at least note that the snow conditions have improved early in 2016 which probably isn't a surprise considering all we heard about last week was the east coast snow-pocalypse.

Polaris' North American motorcycle retail sales managed to increase in the low-single digits % during the fourth-quarter, and against tough year-over-year comparisons. More specifically, the gains were led by Indian motorcycles which gained retail share and expanded its dealerships, and Slingshot which is continuing to gain momentum.

Better yet, the paint capacity woes which had plagued Polaris throughout 2015 are nearly over, as you can see in the graph below, and capacity is beginning to ramp up to match demand. 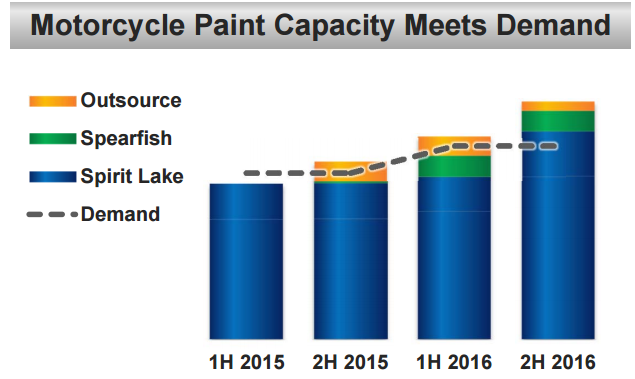 All about the cash
Lastly, one thing investors should always keep updated on is a company's cash flow. 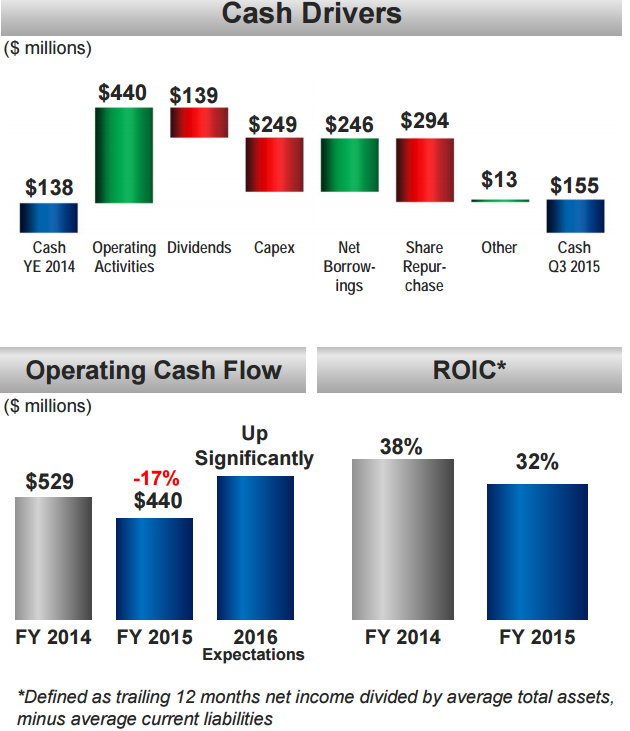 Looking first at Polaris' operating cash flow decline of 17%, which isn't something investors like to see, it's mostly explained by $144 million in increased factory inventory after the company had to slow shipments of its products in the fourth-quarter. Also, looking at the cash drivers portion of the graphic, management increased share repurchases during 2015 in part due to the stock price trading at historically low prices. Investors can also expect that Polaris' capital expenditures will move higher in 2016 as it continues to make Huntsville and Spirit Lake manufacturing investments.

Ultimately, the fourth-quarter was a rough one for Polaris investors, and it put the finishing touches on a fairly challenging year. That said, if the company can continue to gain market share despite industry weakness, as well as continue to cut costs with its lean initiatives and value improvement projects (VIP), it will come out of this challenging time an even healthier business with its brand power as strong as ever – investors will have to have patience in the meantime.

Daniel Miller has no position in any stocks mentioned. The Motley Fool owns shares of and recommends Polaris Industries. Try any of our Foolish newsletter services free for 30 days. We Fools may not all hold the same opinions, but we all believe that considering a diverse range of insights makes us better investors. The Motley Fool has a disclosure policy.