Please ensure Javascript is enabled for purposes of website accessibility
Log In Help Join The Motley Fool
Free Article Join Over 1 Million Premium Members And Get More In-Depth Stock Guidance and Research
By Brian Feroldi - Feb 6, 2016 at 8:06AM

What: The shares of Novavax (NVAX 2.00%), a clinical-stage biotechnology company focused on vaccines, had a January to forget, as shares shed 34% of their value during the month, according to data from S&P Capital IQ.

The company wasn't alone in its plunge as the SPDR S&P Biotech ETF (XBI 1.19%), an ETF that invests primarily in small-cap biotechnology stocks, had an awful month, as well. 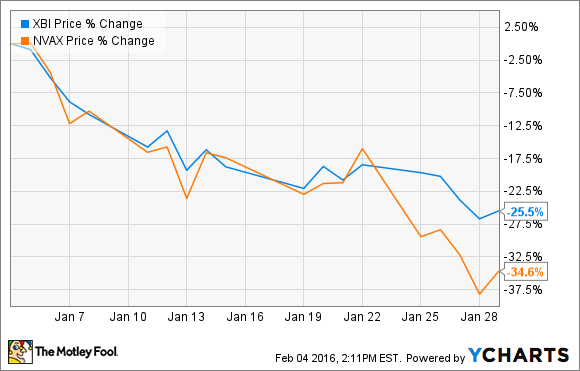 So what: Despite the horrendous decline, the company only had two news items released during the month that were worthy of mention, neither of which can explain the market's reaction.

Now what: Until Novavax can bring its vaccines to market and start to generate revenue, its stock is going to be subject to the whims of the biotech market, so it's no surprise to see its shares fall so much when the XBI takes a hit. Novavax stock also finished a very prosperous 2015, so perhaps traders were simply in profit-taking mode with the company's shares during the month as they bailed out of the biotech sector.

Regardless of its stock's short-term price movements, Novavax's future remains tied directly to the success of its RSV F vaccine, and with late-stage clinical data being reported later this year, it should be an interesting year for investors. If the data continues to look promising, then it's likely that the vaccine will be in regulators' hands by 2017. Given that the RSV virus afflicts tens of millions of patients around the world, each year it looks to hold blockbuster potential.

Investors with a high tolerance for risk might want to consider giving Novavax's discounted share price a closer look.