What: Shares of MannKind Corporation (NASDAQ:MNKD) were up more than 10% as of 11:30 a.m. ET today after the company's soon-to-be former marketing partner Sanofi (NASDAQ:SNY) released its fourth-quarter and full-year results.

So what: The French pharma giant said that they sold roughly $2.2 million worth of Afrezza in the fourth quarter, which was flat with their results in each of the previous two quarters. That puts total Afrezza sales for full-year 2015 right around $7.9 million.

It's doubtful that investors are bidding up shares today based on another quarter of flat results. The more likely reason behind today's price action is the news that Sanofi has set a date of April 4 for when it will officially hand Afrezza back to MannKind. Investors already knew that MannKind was targeting early April as a likely transition date but the original press released stated that it could be up to 180 days.

Hearing that Sanofi is looking to hand back Afrezza as soon as possible is good news for MannKind's shareholders as the terms of its collaboration agreement prevent the company from promoting the drug or making any changes to the sales strategy until it is back in MannKind's control. The deal is also currently preventing MannKind from filing Afrezza for regulatory approval in new jurisdictions, so you can bet the company is now chomping at the bit to take back control as quickly as possible.

Another potential reason that shares could be popping today is that short interest for MannKind's stock is once again near an all-time high, so traders could be looking to cover their huge position now that quarterly sales results have been released. 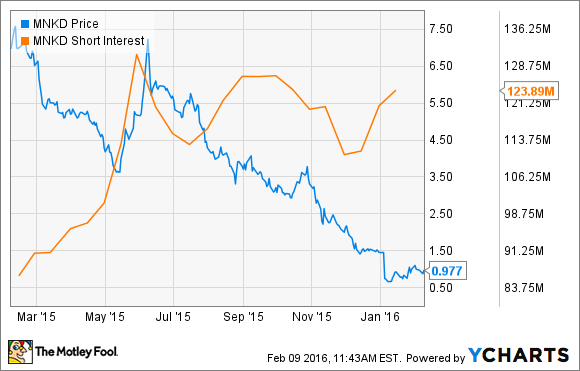 Now what: January was a very turbulent month for MannKind's stock, and with shares currently trading hands for right around a dollar each, it's likely that they will continue to be extremely volatile in the foreseeable future. MannKind's stock isn't for the faint of heart, so investors with a low tolerance for risk should probably keep away.