Please ensure Javascript is enabled for purposes of website accessibility
Log In Help Join The Motley Fool
Free Article Join Over 1 Million Premium Members And Get More In-Depth Stock Guidance and Research
By Brian Feroldi - Feb 9, 2016 at 9:04AM

It was a crazy month for the beaten-down biotech.

January was a crazy month for investors in MannKind (MNKD 1.15%). A flurry of news releases sent shareholders on a roller-coaster ride. The company's stock ended up losing more than 31% of its value during the month, according to data from S&P Capital IQ. 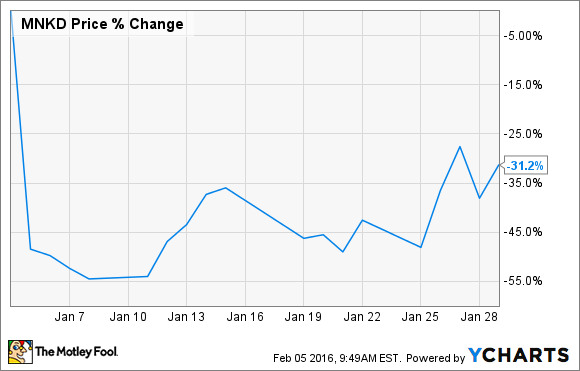 MannKind flooded investors' inboxes with news releases during the month. Here's a quick recap of what transpired.

Jan. 5: Sanofi announced that it was terminating its partnership with MannKind and would be handing Afrezza's commercialization responsibilities back to MannKind over the coming months. Afrezza, an inhaled insulin, is MannKind's only approved drug, so the company was so heavily dependent on Sanofi's deep pockets to turn it into a success. When the news broke, shares lost nearly half of their value and closed below $1 per share.

Jan. 6: Piper Jaffray analyst Joshua Schimmer predicted that the company wouldn't be able to make it without Sanofi in its corner and said the company will head toward bankruptcy. He set a price target of only $0.05 for the company's stock.

Jan. 11: MannKind promoted CFO Matthew Pfeffer to the top seat, permanently filling the void left by his predecessor, who was ousted in November.

Jan. 13: At the J.P. Morgan Healthcare Conference, Pfeffer laid out his ideas on how the company will proceed from here, which included potentially leaning heavily on social media as a low-cost method for marketing Afrezza.

Jan. 21: MannKind inked a deal with with Receptor Life Sciences -- a "newly formed entity" -- worth up to $102.25 million if all development and commercialization milestones are met. Shares rose.

Jan. 26: MannKind released more details on its site about its deal with Receptor. Shares rallied again.

Jan. 27: Shares jumped after Reuters reported that the company is "exploring strategic options, including the sale of itself."

Now what?
MannKind's future remains a mystery. It's unknown whether the company's new marketing strategy will help turn Afrezza's fortune around. It's also possible that someone could swoop in and buy the whole company, but there are plenty of reasons to be skeptical that such a deal would happen.

With so many questions up in the air, MannKind's stock is likely to continue to be extremely volatile into the foreseeable future. Bulls and bears alike should proceed with caution.