2016 is only two trading days old, but it's already been a rough year for investors in MannKind Corporation (NASDAQ:MNKD). News broke this morning that the company's partnership with French drug giant Sanofi (NASDAQ:SNY) is being terminated. Sanofi will transition the commercialization of Afrezza, an inhaled insulin, back to MannKind over the next 90 to 180 days.

The market isn't taking the news well, and shares of MannKind are being sold off hard today. As of 12:30 PM EST they were trading well below $1 per share, their lowest point ever. 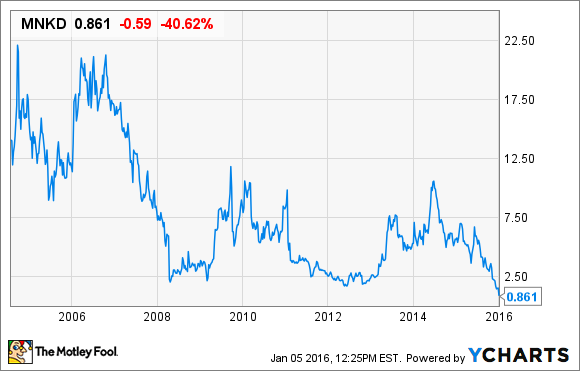 Investors should have seen this coming
We knew that Sanofi had the right to terminate its agreement with MannKind as early as this month if it determined that "the commercialization of Afrezza is no longer economically viable in the United States".

Given that Sanofi was only able to sell about $5.5 million worth of Afrezza through the first nine months of 2015, it's hard to imagine how Sanofi could see the drug as anything other than a money pit. Sanofi was spending tens of millions of dollars each quarter in its commercialization efforts and was even financing MannKind's portion of the loses. Since Sanofi is focused on reaching its newly-announced 2020 target, it's not surprising to see that it wanted out of the contract. After all, Sanofi is currently in the process of launching 6 new drugs that it believes could eventually reach $13 billion to $15 billion in peak sales. Apparently management saw the Afrezza debacle as nothing but a huge distraction.

Cash is getting tight
News of the breakup now puts MannKind in a tough financial position. The company only held $32.9 million in cash on its books as of September 30th, but it also holds $185 million worth of debt. The company did successfully raise roughly $36 million in a common stock offering in Israel, but it's likely that those funds won't last long. In the third quarter alone the company produced a loss of $32 million -- and that was with Sanofi footing the majority of the costs related to the launch.

The only bright spot that I see here -- if you can call it that -- is that MannKind won't have to repay its debts that it owes to Sanofi right away. On MannKind's third quarter conference call, analysts asked MannKind's CFO, Matthew Pfeffer, about its repayment schedule should Sanofi decide to terminate the agreement. Pfeffer stated:

They would have no ability to get that money back for some 10 years.

This fact alone won't come close to solving all of MannKind's near term liquidity issues, but its good to know that this is one creditor that they won't have to deal with anytime soon.

Now what?
The only question on investors' minds right now is what is the new plan for Afrezza now that Sanofi is no longer in the picture. In today's press release, MannKind stated that it is currently "reviewing its strategic options for Afrezza", which could mean that it will attempt to sign up another commercial partner or attempt to sell the drug directly.

Given the awful start that Afrezza has had, I think it's unlikely that another big pharma would be willing to become a partner, which may mean that the company's only option is to commercialize Afrezza by itself. If that's the case, MannKind is going to need to hire and train its own commercial team, which will take time and money -- both of which the company is in short supply of right now.