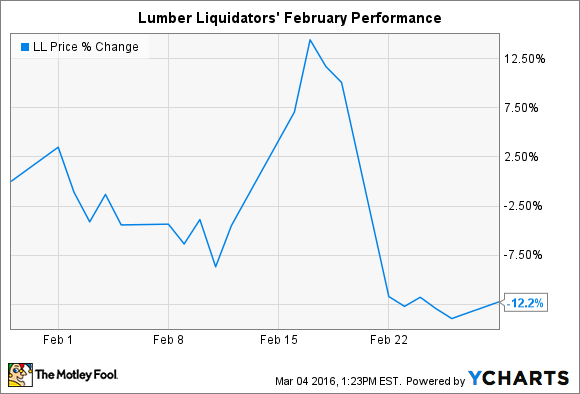 So what: February's drop came courtesy of an update from the U.S. Centers for Disease Control and Prevention, which said that its initial tests found an elevated risk of a person developing respiratory problems and even a remote chance of cancer from exposure to some of the company's formaldehyde-laden flooring products.

Now what: Lumber Liquidators stopped selling the wood products at issue several quarters back, but the hit to its brand continues to this day. Comparable-store sales in Q4 declined 17% as customer traffic plunged, the company reported in late February.

Even worse, that sales drop came despite huge price cuts that cleaved 33% off of the bottom line: Gross profit margin plunged to 23% from 39% a year ago. CEO John Presley told investors recently that Lumber Liquidators' business isn't broken, despite all of the work that remains to be done. "While we have made some progress in key areas such as compliance and core operational efficiency, we still have a long way to go," he explained in the company's latest earnings release. "That said, our business model is intact, we are addressing legacy issues with clarity and candor, and we are rebuilding our brand."

Executives are focused on four key strategic initiatives: improving store traffic, providing better value to customers through cost discipline, improving sourcing safety standards, and expanding the business footprint. Progress on these points would mean a solid rebound for the business, but it isn't likely to be a smooth ride for investors, nor can shareholders be confident that past sourcing mistakes won't eventually result in a large, expensive settlement with regulators.