Healthcare stocks had another good week, and investors in this one ETF made out especially well.

IMAGE BY TBIT VIA PIXABAY.

It was another good week to be a healthcare-focused investor. as many of the most popular exchange-traded funds that concentrate on the sector continued to recover from their dreadful start to the year. Several of these ETFs put up market-beating performance this week, but one fund in particular -- the SPDR S&P Biotech ETF (XBI 1.09%) -- performed exceptionally well. The ETF gained 5.34% during the week, which smashed the returns of the S&P 500. 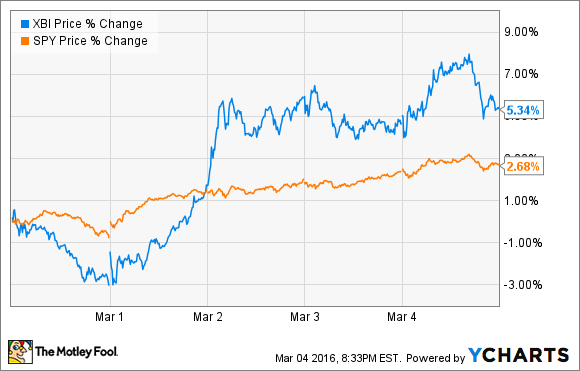 So what's going on inside this ETF that allowed it to post such a huge gain this week?

Cracking it open
The SPDR S&P Biotech ETF holds position in a broad range of companies that primarily operate in the biotechnology sector, an industry prone to huge price swings. When investors are feeling optimistic, biotechnology stocks tend to hugely outperform, but when that euphoria abates, the entire sector can plunge.

One unique strategy that this ETF employs is that it invests the same amount of initial capital into each of its holdings, which is currently 105 different companies. However, over time the fund tends to become unbalanced as its winners grow and its losers shrink, so to compensate, the fund rebalances itself quarterly.

What went right this week?
Several of this fund's top 10 holdings soared higher over the past few trading days, but two companies in particular -- ZIOPHARM Oncology (ZIOP 6.76%) and Medivation (MDVN) -- put up double-digit returns. 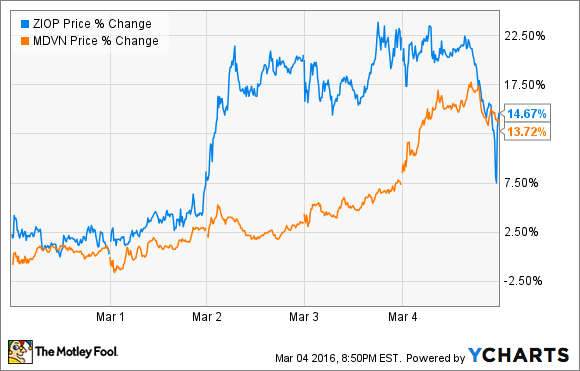 ZIOPHARM Oncology's stock continues to be red hot. Investors bid up shares this week after the company's CEO presented at the Adoptive Immunotherapies Summit in London. His talk discussed the benefits that can arise when companies and academic institutions collaborate, but it appears that some traders were bidding up shares over the speculation that ZIOPHARM might be in active partnership talks during the week. That speculation stemmed from the fact that there were representatives from several big pharma companies in attendance at the meeting.

It also probably didn't hurt that legendary investor Bill Miller expressed his bullishness on the company's technology during an interview on CNBC this week.

Medivation's stock got a boost this week after news broke that UCLA had sold its royalty rights to the company's hit prostate cancer drug Xtandi for $1.14 billion. The rights were purchased by Royalty Pharma, a privately held pharmaceutical investment company.

Xtandi was initially developed by a research team at UCLA, and the university ended up licensing the use of the drug out to Medivation -- which then went on to sublicense it to Astellas Pharma -- and Xtandi has become a blockbuster. Stateside sales of Xtandi are expected to eclipse $1.4 billion in 2016, so news of the huge payout caught traders' attention.

What's next for XBI?
It was great to see that XBI continues to bounce back from its awful start to the year, but investors in this ETF still have a long way to go before they will be made whole. Even after the big share price jump this week, the ETF has still lost more than 26% of its value since the start of the year, which could hint that right now is a good time to give this ETF a closer look.