Healthcare ETFs had another great week, but the returns offered from this one ETF make it this week's top performer.

The S&P 500 had another good week as it continues to bounce back from the huge declines it saw earlier in the year. The healthcare sector performed even better over the past five trading days, with many of the most popular ETFs that focus on the sector producing gains that outpaced the index. One ETF in particular -- the iShares Dow Jones US Healthcare Provider ETF (IHF 0.71%) -- had a particularly great week: Its gain of 4.71% was more than 300 basis points higher than that of the S&P 500. 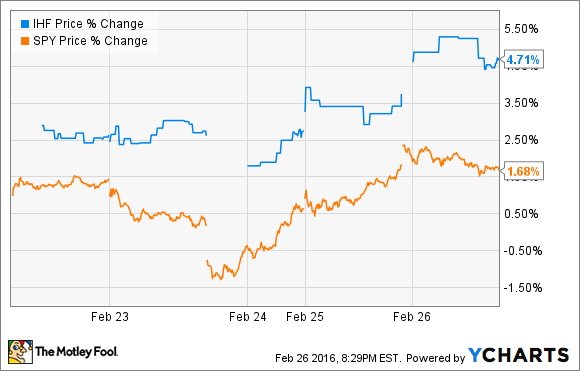 So what's going on inside the iShares Dow Jones US Healthcare Provider ETF that allowed it to put up such a great performance this week?

Cracking it open
One unique attribute that the IHF offers its investors is that it runs a very concentrated portfolio. While this ETF counts more than 52 different companies among its holdings, a huge chunk of its assets are invested in just a handful of giant health insurers.

Take a quick glance at this fund's current top 10 positions to see what I mean:

As this table shows, five of this fund's top 10 holdings are large insurance companies that together account for nearly 40% of its total assets. Simply put, if the health insurance industry has a good week -- as it did this past week -- then this fund is primed to outperform.

What went right this week?
While several of this fund's top holdings rallied by 3% or more this week, three stocks in particular -- Humana (HUM 0.13%), Aetna (AET), and Universal Health Services (UHS 1.64%) -- had standout performances. 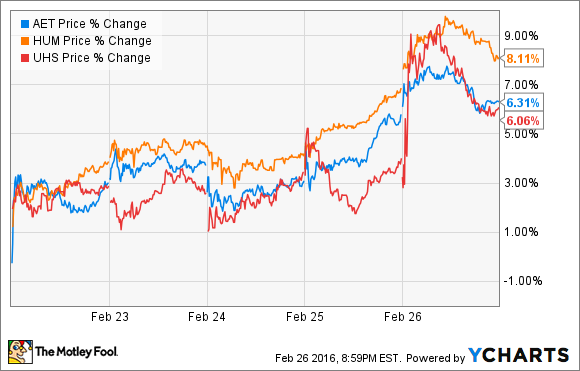 That's good news for both Humana and Aetna, since government-sponsored plans such as Medicare Advantage will comprise roughly 56% of their combined revenue once the merger between these two companies is complete. That deal is still on schedule to close in the second half of this year.

Universal Health Services stock popped this week, after the company reported its fourth-quarter earnings. The company posted adjusted earnings per share of $1.71 for the period, which fell a couple of pennies shy of Wall Street's expectations. Wall Street overlooked the shortfall, as the company's revenue came in ahead of consensus estimates, and it also issued a bullish forecast for the year ahead. Universal Health Services management is calling for 2016 earnings per share to land between $7.12 and $7.58, and revenue is expected to climb to between $9.75 billion and $9.85 billion. Both of those numbers compared favorably with what Wall Street was expecting, which gave the markets a reason to cheer.

What's next for the IHF?
It's too early to know if the rally that healthcare stocks have seen over the past two weeks will continue into the foreseeable future, but the recent uptrend is certainly a good sign. Investors who are worried that the sell-off of healthcare stocks might continue should consider giving this ETF a closer look, since it offers up an equity beta of 0.62%, which means its volatility is much lower than that of the S&P 500 in general. That could make it a good choice for investors who want to put money to work in the healthcare sector but have the stomach for a huge amount of risk.

Brian Feroldi has no position in any stocks mentioned. The Motley Fool owns shares of and recommends Express Scripts. The Motley Fool recommends UnitedHealth Group. Try any of our Foolish newsletter services free for 30 days. We Fools may not all hold the same opinions, but we all believe that considering a diverse range of insights makes us better investors. The Motley Fool has a disclosure policy.