Healthcare ETFs had a great week, but this one ETF stood out from the crowd.

After getting off to a rough start for the year, healthcare focused investors finally had a week to smile about, as many of the most popular exchange-traded funds that focus on the sector came roaring back to life over the past few trading days. One fund in particular -- the SPDR S&P Biotech ETF (XBI -2.63%) -- performed extraordinarily well, gaining 6.5% during the short trading week and handily outperforming the returns of the S&P 500. 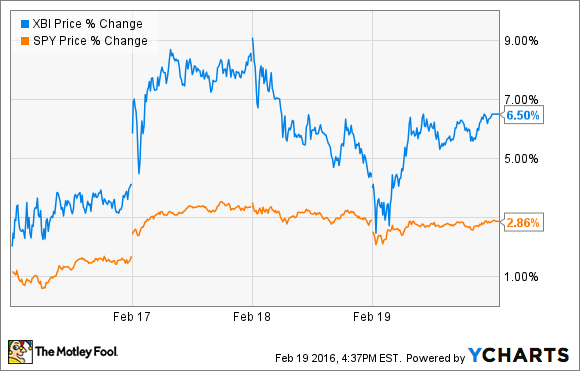 So what went right this week for the SPDR S&P Biotech ETF that caused the huge outperformance?

Peaking inside
As its name implies, the SPDR S&P Biotech ETF invests its assets in a variety of companies from the biotechnology sector, which makes this fund prone to huge price swings. When the market smiles on biotech stocks, this fund can scream higher, but when the market is in a foul mood it can plunge.

One unique feature that sets this ETF apart from other biotechnology ETFs is that it follows an equal-weight strategy, which means it invests the same same amount of capital initially in each of its 105 different holdings. However, as time passes, the fund can start to become unbalanced as its best-performing stocks grow and its laggards shrink, so this fund rebalances itself quarterly.

What went right this week?
Several of this fund's top 10 holdings had great performances this week, but two companies in particular -- AMAG Pharmaceuticals (AMAG) and PTC Therapeutics (PTCT -0.97%) -- put up double-digit returns. 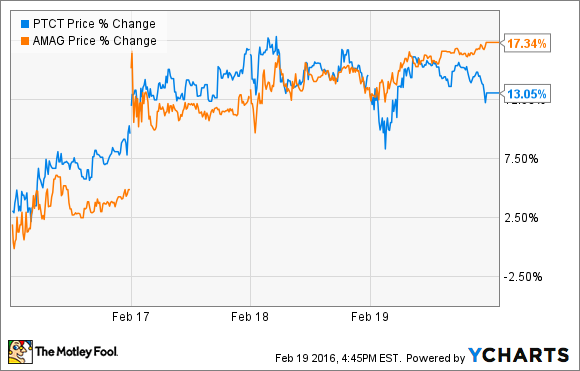 AMAG Pharmaceuticals' stock got a shot in the arm this week after the company released its fourth-quarter earnings. Non-GAAP revenue for the period was $120.6 million, and adjusted earnings came in at $1.12 per share, both of which fell short of analysts' expectations. However, thanks to its acquisition of Cord Blood Registry, management expects that its revenue will surge for 2016 revenue, calling for it to land between $520 million and $570 million, up sharply from the $418 million it reported in 2015. That news -- combined with the fact that its shares have swooned since the start of the year -- appears to be the reason behind the huge jump this week.

PTC Therapeutics' stock also got a boost this week, after news broke that 109 members of Congress sent a letter to the FDA regarding its review of drugs designed to treat Duchenne muscular dystrophy. So far, the agency has been issuing harsh words related to the drugs submitted for approval, and this letter called for the agency to "utilize all available tools, resources, and authorities to accelerate the process of delivering safe and effective treatments to patients diagnosed with this 100 percent fatal disease."

Since PTC Therapeutics' lead drug, ataluren, is being studied as a potential treatment for Duchenne muscular dystrophy, investors looked at the letter as a reason to be optimistic about a potential approval and bid up shares. But it's unknown at this point if it will ultimately sway the agency's decision on any DMD drugs.

Now what?
It was great to see the XBI finally come roaring back to life this week. This fund has been a terrible performer so far this year -- even after including this week's monster move, it's still down more than 28% since the start of the year. Still, I really like that this fund follows an equal-weight strategy, and its 0.35% expense ratio makes it a cheap and easy way for investors to gain broad based exposure to the biotechnology sector. If you're willing to stomach a lot of volatility, then it might be a good time to put this ETF on your watch list.