Harsh words from a FDA advisory committee report have investors fearing the worst.

What: Shares of Sarepta Therapeutics (SRPT 2.44%), a clinical-stage drugmaker focused on orphan diseases, shed more than 68% of their value during January, according to data from S&P Capital IQ. 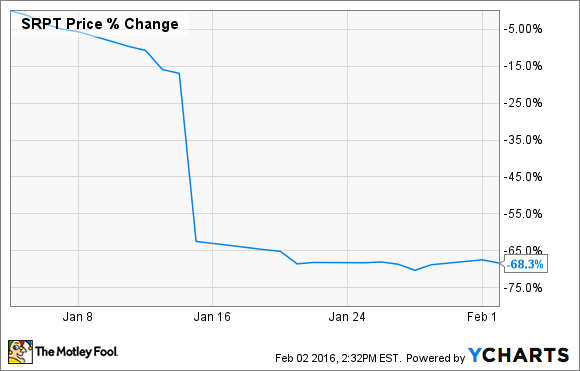 So what: The reason for the decline can be traced an FDA advisory committee report that was released during the month related to Sarepta's drug eteplirsen, which is currently pending approval as a treatment for Duchenne muscular dystrophy, or DMD. The FDA report slammed the data that Sarepta submitted for eteplirsen, as the committee raised serious concerns about eteplirsen's efficacy and the methodology used to collect data in its clinical trial.

The scathing report led some traders to fear that the FDA would not approve eteplirsen on its PDUFA date of Feb. 26, causing shares to plunge.

Now what: Shares of Sarepta Therapeutics have been on a wild ride over the past few months. They initially soared in November after its DMD competitor BioMarin Pharmaceutical (BMRN 1.10%) struggled to make a case for its own drug's approval during its FDA advisory committee meeting. The FDA later issued a complete response letter to BioMarin stating that its application was not complete in its present form and that "the standard of substantial evidence of effectiveness has not been met". BioMarin is still working with the FDA to determine next steps, but it does not have an updated timeline.

That news led the markets to believe that the agency was leaning toward approving Sarepta's drug instead, which makes sense as DMD is an awful disease that currently has no cure. That optimism was dashed after the FDA advisory report was released.

That doesn't mean that eteplirsen won't gain approval, but advisory-panel opinions usually carry a lot of influence with the agency. We'll have our answer to which way the FDA decides to go in a few weeks' time.

Brian Feroldi has no position in any stocks mentioned. The Motley Fool recommends BioMarin Pharmaceutical. Try any of our Foolish newsletter services free for 30 days. We Fools may not all hold the same opinions, but we all believe that considering a diverse range of insights makes us better investors. The Motley Fool has a disclosure policy.