The makeup company gained in spite of a weak earnings report. Was it just a dead cat bounce?

What: It was a rocky month for Avon Products (AVP), but the troubled beauty products maker finished up 12.4% last month, according to S&P Global Market Intelligence, overcoming a weak earnings report to post gains. As the chart below shows, it was a volatile month for the stock. 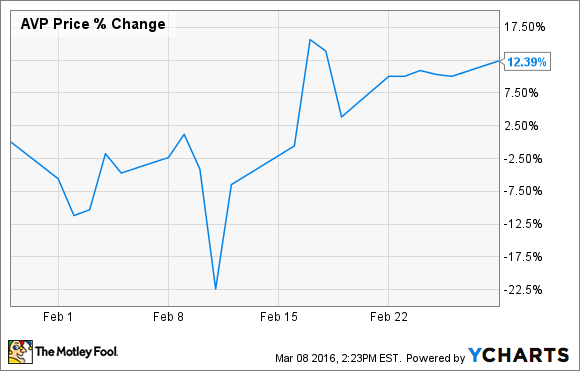 So what: Shares of the beauty products company tumbled 19% after reporting its 16th straight quarter of declining sales. Revenue fell 20%, though it was up 3% adjusting for foreign currency exchange and the divestiture of Liz Earle.

Bottom-line figures were equally discouraging as it reported a loss from continuing operations of $0.04, or breakeven after adjustments. Operating margin also fell 480 points to 3.9%. One positive sign in the quarter was a 2% increase in Active Representatives, showing that the company has been able to recruit new salespeople. Europe, Middle East, & Africa was also a bright spot as sales in constant dollars increased 6%.

Avon announced in December a plan to sell 80.1% of its North American business to Cerberus Capital Management, and in January released a transformation plan that includes a goal of $350 million in cost-cutting.

Now what: Avon shares have fallen by more than 90% since the recession as the business has unraveled. However, the volatile stock has gained 50% since the earnings report came out on optimism for the turnaround and as the broad market recovers.

Avon got a cash injection from Cerberus on March 1 when the private equity company agreed to invest $435 million in convertible preferred stock as part of a new strategic partnership between the two companies. While increased liquidity will help the company stay afloat, it does nothing to improve its underlying business model. With a net loss of more than $1 billion last year, Avon appears to be a long way from a turnaround. I'd stay away unless the transformation plan begins to show some traction.